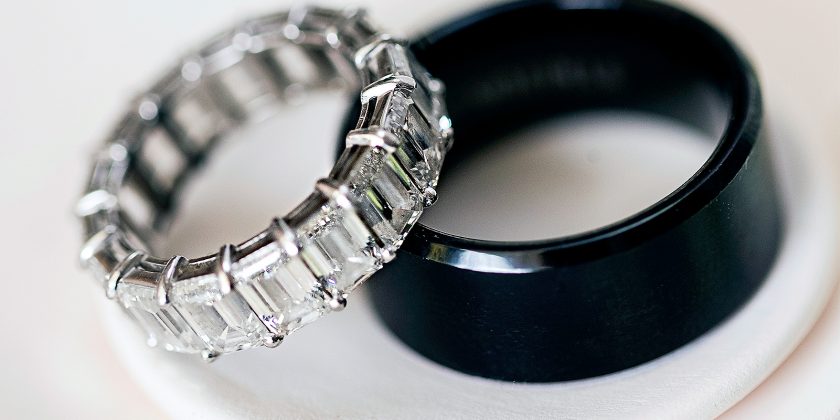 Flip or Flop‘s Christina El Moussa officially tied the knot to her boyfriend of one year, Ant Anstead, in a romantic ceremony in Newport, California, last week and we have all the scoop on her celebration, her dress and her stunning wedding band.

The bride, 35, walked down the aisle in a long-sleeve mermaid-style gown with a long, flowing veil and cascading train. She told PEOPLE that she knew she wanted her look to be “romantic” and statement-making. For the reception after, she removed the sleeves for a party-ready gown.

Anstead, 39, who hosts Discovery’s Wheelers and Dealers, wore a three-piece suit to their secret “winter wonderland” wedding at their home. The couple pulled off the surprise by asking 70 of their closest friends and family members to meet at their house, where a charter bus would then transport the group to watch the Newport Beach Christmas Boat Parade. But to the guests’ surprise, they walked into a wedding.

Fans were speculating that the pair may have gotten engaged earlier this month after her British beau posted a cryptic photo of the couple “celebrating something special.” Anstead shared a selfie indulging in “steak and wine ….aaaaannndddd…. this epic cinnamon/caramel/ice cream/cholesterol on a plate desert,” he wrote.

Fans also pointed out that El Moussa’s hands were conveniently cropped out of the pic, but a representative for El Moussa clarified to PEOPLE that the celebration was for the wrap of her new solo HGTV show, Christina on the Coast, which premieres in May.

The couple have been dating since last fall, after meeting through a mutual friend. By July, El Moussa revealed to PEOPLE that things were already getting serious.

“I can see myself getting married to him,” she said in a PEOPLE cover story. “He’s so down-to-earth, and we have so much in common. We basically do the same thing, so he gets what my world is like, and he’s just rolled with the punches and handled everything so well.”

El Moussa split from her husband of seven years, Tarek El Moussa, with whom she still appears on Flip or Flop. “I was definitely not looking to meet anyone. I remember saying, ‘No matter what, I’m not dating anyone for a year, and don’t let anyone near me.”

But she agreed to go on a date with Anstead after their first phone call via FaceTime lasted 2.5 hours, and the pair had an “instant connection.”

Christina and Tarek have two children — Taylor, 8, and Brayden, 3 — and Anstead shares Archie, 12, and Amelie, 15, with his ex, Louise, who he was in the process of divorcing in July.

El Moussa told PEOPLE that their families have blended well and Anstead has the approval of Taylor and Brayden. “My kids love him,” she told PEOPLE. Brayden and Anstead “have a great time together, playing and doing boy stuff,” while Taylor is even more attached: “Taylor asks me questions like, ‘When is Ant getting divorced? You need to marry that one.’”

They exchanged vows with their children nearby. “We wanted to make it about the kids,” Anstead told PEOPLE. “It’s the six of us. We’re a blended family so it was really important for them to be a part of it.”

Next up for El Moussa is a name change. She’s officially changing her last name to her new husband’s. “It has a nice ring to it, doesn’t it?” she said. “Christina Anstead. We couldn’t be any happier!”