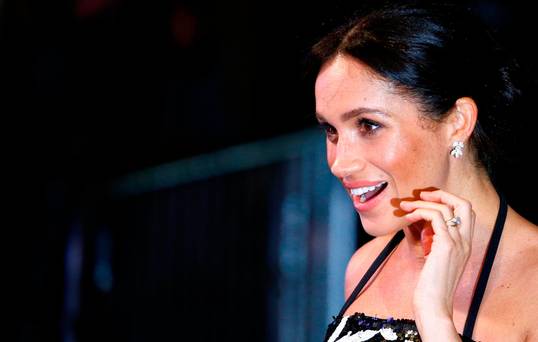 Can you believe that it was only  a year ago on Tuesday that Meghan Markle and Prince Harry walked arm-in-arm into the sunken garden at Kensington Palace for a photocall marking their engagement?

Her sleek, wrap coat by Canadian brand Line the Label was a message that her past life as an actress in Toronto would not be forgotten just yet, while also allowing her 6.5-carat diamond ring to take centre stage.

But the true statement of style intent from the future Duchess of Sussex had come a couple of months earlier, when she made her first public appearance with Harry at the Invictus Games. Her ripped jeans, big tote bag and oversized white shirt were modern and ‘real’, more the sort of thing you’d expect to see a normal woman wearing than a soon-to-be wife of a prince. Meghan, this outfit said, would be a royal who meant business with her fashion choices, but also wouldn’t be indulging in too much classic princess dressing.

Fast-forward through a wedding, two foreign tours, a charity cookbook, a pregnancy announcement and 90 public outfits, and fashion-wise Meghan has spent the past 12 months toying with royal protocol (there’s no official rule book, just unspoken guidelines), and influencing shopping decisions around the world, all with a little help from her best friend and unofficial style adviser, Jessica Mulroney. The Meghan Effect is real. ‘We notice  a sales shift when she wears one of our pieces,’ one of her favourite designers Joseph Altuzarra tells me. ‘She is in a class of her own compared to other VIPs,’ adds Maggie Marilyn, the New Zealand-based designer behind the white dress Meghan wore in Wellington, whose designs have also been worn by Kendall Jenner and Kate Hudson.

There are big numbers to back up these anecdotes: Outland Denim saw a 2,300 per cent increase in sales in the two weeks after she wore its Harriet jeans, which meant it could employ 15-30 more people; Net-a-Porter saw a 442 per cent uptick in sales of Castañer espadrilles when Meghan debuted hers in Sydney and, according to fashion search engine Lyst, British brand Goat enjoyed a 410 per cent boost in interest after the new Duchess of Sussex wore its dress for a Buckingham Palace garden party.

Meanwhile, an M&S jumper, a bag from Strathberry, and boots, a coat and a clutch from J Crew all sold out within hours of Meghan wearing them. The royal wedding in May was estimated to have given the UK economy a £1 billion boost and Meghan is soon expected to match the Kate Effect on fashion, which was valued at £152 million in 2015. These are all dizzying statistics, but there is more to Meghan than an ability to shift stock. Or rather, she wouldn’t be causing these sell-outs if there wasn’t a style message that we wanted to get behind.

This has been the year of building brand Meghan. So what has the Duchess been telling us with her wardrobe?

First of all, that she’s not afraid to defy some set-in-stone royal customs. The Queen once said that she needs to be ‘seen to be believed’, which means wearing brightly coloured clothes. Most other key female members of the family take her lead, opting for eye-catching hues that will stand out in the crowd. But not Meghan. As you’ll see from our calculations (above), cream, navy, khaki and black are her most-worn colours – anything bright always feels like an anomaly.

In June, Stella McCartney said that the glamorous halterneck dress she created for Meghan to wear to her evening wedding reception was the ‘last moment that she could reflect sort of the other side to her: the joy and the human within her’ before embarking on ‘austere’ royal life. That was never going to be Meghan’s MO, though. When she wore a shoulder-baring top to Trooping the Colour, the look proved divisive – many traditionalists claimed it was a disrespectful choice for such a formal occasion, others hailed it as a breath of fresh air. Her penchant for miniskirts (‘it’s the Duchess of Sussex dressed as Meghan Markle’ some quipped when she wore  an above-the-knee tuxedo dress for a performance of Hamilton) and trousers  also veer away from the conservative dress code the Queen is said to encourage.

The newly married Duke and Duchess of Sussex, Meghan Markle and Prince Harry, leaving Windsor Castle after their wedding to attend an evening reception at Frogmore House, hosted by the Prince of Wales CREDIT: PA

California-born Meghan has adopted an unusually international clutch of favourite designers too. Whereas the royals are usually patriotic shoppers, 66 out of Meghan’s 90 public outfits have been from non-British labels. Her post-wedding penchant for Givenchy, Prada, Dior and Oscar de la Renta showed that she was embracing the chance to indulge in high fashion, and who can blame her?

Canadian and American labels feature heavily in the wardrobe line-up, sometimes in quite marked ways – her decision to wear American designers on International Women’s Day seemed like a statement that she’d remain her own woman despite her public role being defined by the man she was about to marry.

Meghan has said that women’s empowerment and environmental issues will be among her passion projects and she’s already using her clothes to make a point. Sales of eco-trainers Veja rocketed by 176 per cent on Net-a-Porter after Meghan was pictured in a pair at the Invictus Games and, according to Lyst, sustainable luxury designer Gabriela Hearst saw a 196 per cent surge in interest when Meghan wore her silk cap-sleeved dress in New Zealand.

‘Meghan is a big supporter of empowering women. She has a voice,’ says Karen Gee, the designer of the Blessed dress that Meghan wore for her first appearance after announcing her pregnancy. ‘To see her wearing my label was incredible, but more than this, she  is an advocate for equality, which is synonymous with the ethos of my brand.’

There is a serious method and strategy to Meghan’s style evolution. Beady eyed Duchess-watchers, of whom there are many, have observed the carefully matchy-matchy progression of her looks. American style reporter Elizabeth Holmes, whose ‘So Many Thoughts’ Instagram stories commentary on Meghan’s outfits received 3.8million impressions during the tour of the Southern Hemisphere, calls this ‘The slideshow theory’.

“I believe that Meghan, with her television background, understands acutely the way celebrity stylists craft a persona during awards season. In the six months since becoming an official royal, her dressing has appeared to be a deliberate attempt to build a brand in this way,” explains Holmes. “She was all about blush or light-colored dresses just after the wedding; then came the boat necks and the tailored suits. The continuity presents a sort of singular image and helps garner press coverage, too.” This is Meghan’s way of being in complete control of the trends she sets.

If this year has been all about Meghan shaping her Duchess-dressing approach, then the next will, of course, involve her tackling the tricky issue of maternity style. “The fit of her clothing has been a big subject among my followers,” notes Holmes. “She seems to have struggled with the tailoring and finishing of garments throughout her time in the royal spotlight, including now in her early stages of pregnancy—which, I must say, is a difficult time for any woman to dress!”. Planning a tour wardrobe of 38 outfits which need to accommodate a pregnancy which wasn’t announced until the day before it began is hardly ideal. But now that’s over, Mulroney, who has twin boys and a daughter, should be well placed to guide her through- the pair has already dabbled with a simple navy ASOS Maternity dress. And whether the Duchess opts for an earth mother or power mum look, she’s guaranteed to be setting mother-to-be trends as she goes.