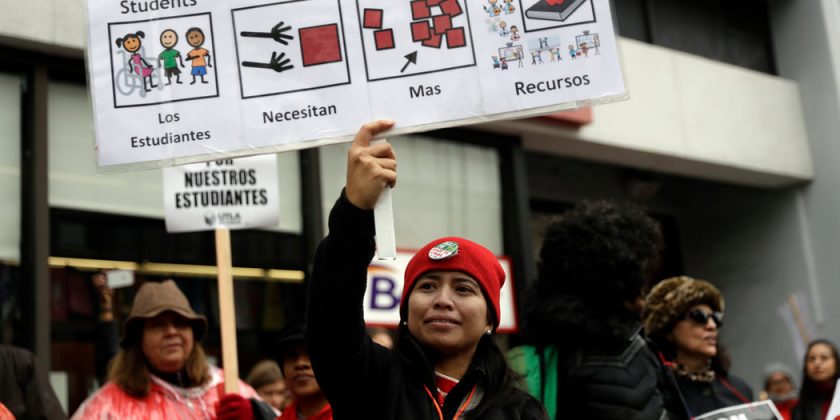 El Espace is a column dedicated to news and culture relevant to Latinx communities. Expect politics, arts, analysis, personal essays and more. ¿Lo mejor? It’ll be in Spanish and English, so you can forward it to your tía, your primo Lalo or anyone else (read: everyone).

On Monday, more than 30,000 public-school teachers and employees of the Los Angeles Unified School District went on strike, protesting for higher pay, smaller class sizes and more support staff for their students. Though negotiations had reportedly resumed on Thursday between the district and the union (United Teachers Los Angeles), the demonstrations of these educators are part of a larger trend. Last year, teachers in West Virginia, Arizona, Oklahoma and Kentucky walked out over similar, widespread concerns.

Los Angeles Unified is the second-largest public education system in the country, serving nearly half a million students. And around 75 percent of the students who were affected by the walkout are Latino. Even before the walkout, these students suffered from years of limited funding; California spends less per pupil than the national average.

“There is no way to describe the persistence of such conditions other than racial discrimination,” Alex Caputo-Pearl, the president of United Teachers Los Angeles, wrote in an op-ed for the Los Angeles Times.

In a 2008 paper, Patricia Gándara, the co-director of the Civil Rights Project/Proyecto Derechos Civiles at U.C.L.A., called the state of Latino education a “crisis.” “These students will form the work force in the immediate future,” she wrote, and, more specifically, “if the state of California does not immediately begin preparing more underrepresented students for higher education, by 2020 the state will experience an 11 percent drop in per capita income, resulting in serious economic hardship for the people of California.”

Part of the problem, Gándara said, is misplaced attention on English language ability. “The notion of speaking a language other than English as an educational liability must be turned on its head,” Gándara wrote, noting the positive effects of dual language programs on both Latino and non-Latino students.

Earlier this month, a BuzzFeed News article about burnout as the perennial millennial condition went viral, hitting a nerve with many who could relate to feeling overworked and obsessed with productivity. The result of our current condition, wrote Anne Helen Petersen, is that millennials tend to neglect ostensibly simple tasks, like going to the post office or doing laundry, if they aren’t directly related to our jobs. (Guilty!) Petersen described burnout as a systemic issue: “The problem with holistic, all-consuming burnout is that there’s no solution to it. You can’t optimize it to make it end faster.” Her essay set off alarm bells in my head and gave language to a latent feeling I’ve had for a long time that something’s got to give.

A response written by Tiana Clark expanded on Petersen’s idea to consider how race and economic inequality increase burnout even more. “Yes, we are all so damn tired and in debt,” she wrote, but it is compounded for people of color, who must also manage microaggressions and systemic discrimination as well. It’s a worthwhile read that adds another dimension to discussions about our collective health.

Sadly, neither article offers concrete solutions, so listen: If you have the key to feeling less tired all the time, my DMs are open!

Here are more stories to read this week.

WHEN A VET CAN BE DEPORTED

This BuzzFeed News article about an American who served in Afghanistan and almost got deported is … troubling.

“HAMILTON” HEADS TO THE CARIBBEAN

The hit Broadway show started a 17-day run in Puerto Rico last week and gave the audience all the feels on opening night.

Eduardo Cepeda and Isabelia Herrera, both of Remezcla, and Suzy Esposito of Rolling Stone joined Jon Caramanica on Popcast to discuss Bad Bunny’s “X100PRE.” I was living for the musical intermissions with the Latin trap star’s greatest hits: The pod opens with the first minute or so of “La Romana” (my favorite song on the album, obviously). Later, they play the Dominican dembow “Dema Ga Ge Gi Go Gu,” and y’all — I have never felt so seen! 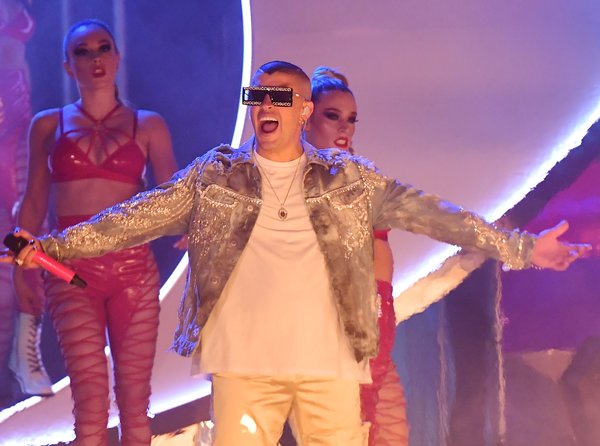 BOYS GET SAD, TOO

It’s hard to believe this is a first, but last week, the American Psychological Association released its first ever guidelines for psychologists working with boys and men. Men who are socialized to conform to “traditional masculinity ideology” suffer physically and emotionally, according to the guide, and Fredric Rabinowitz, one of the its lead writers, said: “We’re trying to help men by expanding their emotional repertoire, not trying to take away the strengths that men have.”

Figure Skating in Harlem, an organization that helps girls of color build confidence through practicing the sport, is trying to change the face that comes to mind when you think of athletes twirling on ice. The pictures of the girls (and their quotes) in this story are swoon-worthy. According to one 10-year-old, “When you are gliding on the ice, the wind pushes against you and it just feels like you are flying.”

Do you have suggestions for El Espace? Want to receive it as a newsletter? Let me know: [email protected]