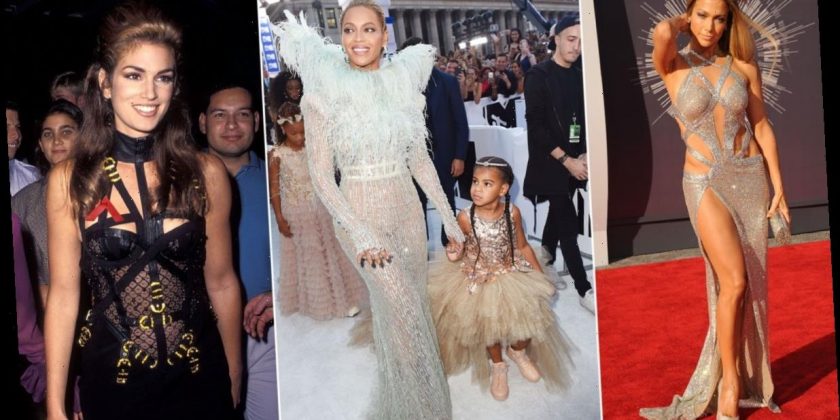 Awards season might look a little different in 2020, but that doesn't mean we can't look back and enjoy some truly memorable fashion moments from over the years – and the VMAs red carpet always comes up with the goods. Whether it's Beyoncé turning heads in a glittering gown or Madonna making a statement, there's too many incredible moments to choose from!

MORE: All the memorable looks from the 2019 Grammy awards

We'll kick things off with a classic. Gwen Stefani's 1998 VMAs look will always be referenced as the ultimate example of nineties alternative style – she was the edgy pop princess we all wanted to be. Pastel space buns, face jewels and a faux fur bikini? The nostalgia is real.

Cindy Crawford rocked this statement Versace number to the 1992 event – a look which was later mimicked by her model daughter Kaia Gerber at her 18th birthday party in 2019!

Flash forward to 2014, when Jennifer Lopez wowed us with one of her signature cut-out looks. We are not worthy.

Remember when Beyoncé and daughter Blue Ivy stole the show at the 2016 awards?

But we couldn't leave out the ethereal white gown the star wore to accept her award at the same event.

In 1984, Madonna performed in her iconic white lace bustier dress and pearl jewellery.

We love that Gwyneth Paltrow chose to stand out from the crowd in a trouser suit at the 1996 event.

We couldn't resist this adorable snap of Britney and Justin at the 2000 ceremony, either.

This walk down memory lane wouldn't be complete without a shot of the Spice Girls! We love everything about this 1997 throwback, from the platform trainers to Posh's iconic pointy pose.

No one can rock a nude latex two piece like Miley Cyrus!

It wouldn't be a VMA Awards round up without Lady Gaga's infamous meat dress, which was made with pieces of raw beef. The singer later revealed it was a political statement against military discrimination of the LGBTQ+ community.

We love this gorgeous shot of Janet Jackson in 1994.