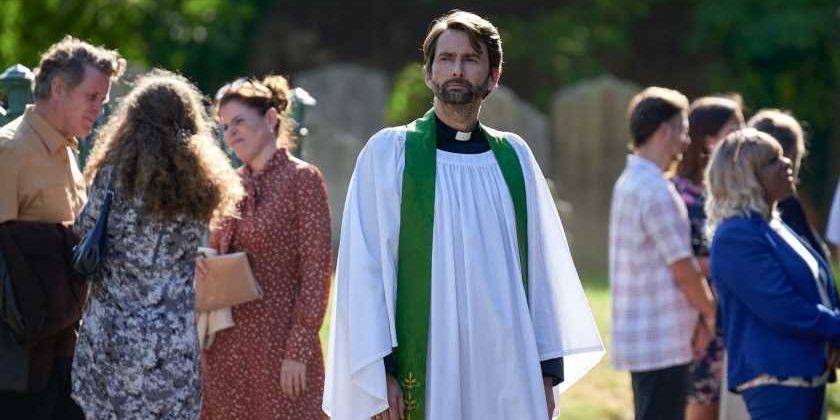 The BBC are keeping tight-lipped about its latest thrilling miniseries, Inside Man, but we can’t wait for it to come to our screens next year.

The BBC has released a series of first-look images for its new thriller, Inside Man – and they’re just as ominous as you might expect.

Not much is currently known about the premise of the show but it’s the first time we get to see its star-studded ensemble in action. As of now, plot details are being kept under wraps but what is apparent is that the story will follow a prisoner on death row in the United States, a vicar in a quiet English town, and a maths teacher trapped in a cellar.

What’s their connection, you may ask? We don’t have the answers but it does seem as though paths will cross in some dramatic way. With It’s A Sin’s breakout star Lydia West, Stanley Tucci and David Tennant all starring in this series, it’ll certainly be a captivating watch.

It appears as though Stanley Tucci will be taking the title role of the Inside Man.

The Secrets She Keeps: did you know the BBC thriller is based on a true story?

The images, which were released by the BBC yesterday, have already been the subject of fanfare.

They show a forlorn Stanley Tucci as the titular Inside Man, David Tennant as a vicar and Lydia West possibly assisting Tucci in prison. Elsewhere, we see Pursuit Of Love’s Dolly Wells and Hanna’s Lyndsey Marshal also being part of the main cast.

While no information accompanies the imagery, the show is already set to be a hit among BBC thriller fans. Written and created by Steven Moffat, and executive produced by Sue Vertue for Hartswood Films, both have said: “This is the best ensemble we’ve ever had the chance to work with. It’s a rare privilege to see scripts come to life as beautifully as this.”

The miniseries will consist of four 60-minute episodes and will be coming to our screens via BBC One and BBC iPlayer next year.

Ben Irving, commissioning editor of BBC Drama also says: “Steven Moffat has created another brilliantly original and darkly playful series in Inside Man and it’s no surprise that it has attracted such an extraordinary cast. This will be a ‘must-watch’ when it lands.”

Dolly Wells in BBC’s Inside Man.

Of course, we have a little while to wait for this drama but it does seem as though it will be both short and very intriguing when it finally does come to our screens.

Lyndsey Marshal in BBC’s Inside Man.

The Trick: the BBC’s new “conspiracy thriller” hits screens tonight (and it’s based on a wild true story)