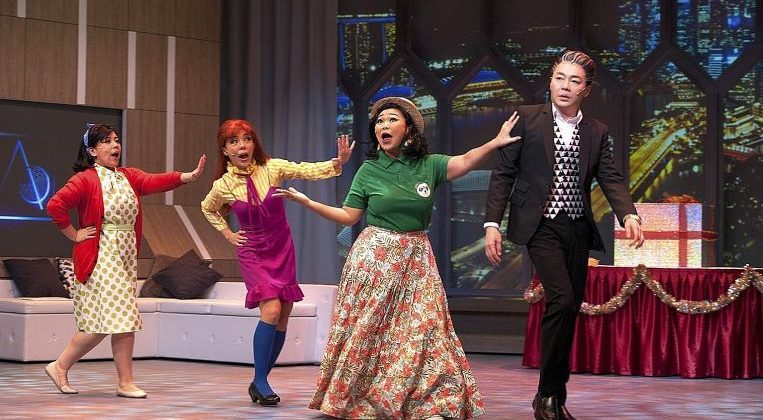 In a time when we lionise crazy rich Asians and yearn for them to teach us the secrets of their success, A $ingapore Carol focuses instead on what a multimillionaire has yet to learn.

This clever update of A Christmas Carol, Charles Dickens’ 19th-century feel-good fable, pokes fun at established order the way the best pantomimes do. And in a meta-twist, the perils of preferring technology over people are shown in the production through clever use of multimedia and smartphones.

The modular set by Eucien Chia includes several screens used to display videos and animations by Genevieve Peck. Sometimes, the screens display ads for the main character’s app empire. At other times, they depict a shadow play in an idyllic kampung. Later, the screens turn the Victoria Theatre into a stark futuristic columbarium where images of flowers, not real bouquets, honour the dead.

Viewers think twice about the real value of virtual connections even as members of the audience are invited to use their cellphones at certain points in the show, updating the call-and-response format of pantomime tradition. At least one viewer took this chance to check social media but, underscoring the message of A $ingapore Carol, the vividly realised pantomime world eventually proved more attractive than the two-dimensional display on the smartphone.

This Wild Rice production, directed by Hossan Leong and written by Jonathan Lim (book and lyrics), has several poignant messages for the self-involved, self-isolating and smartphone-addicted age.

BOOK IT / A $INGAPORE  CAROL

Loo’s power makes him callous and careless of people, including his long-suffering assistant de Crachit (a delightful Fauzie Laily). An intervention is staged by Loo’s only friend, the late Ali Inwan (the versatile Dwayne Lau, who also appears as a spirit and a security officer). Three ghosts appear to get Loo into the Christmas spirit.

Appropriately for the time and region, the Christmas spirits include the hantu of a banana tree (Christmas Past, played with comic grace by Siti Khalijah Zainal); a virtual reality composite of the model he uses to sell his apps (Audrey Luo as the frighteningly good ghost of Christmas Present); and the bodiless voices of artificial intelligence assistants Alexa, Siri and others yet to come (Candice de Rozario in a mindblowing, operatic performance).

A $ingapore Carol scores top marks on every technical aspect, from the whimsical costumes by Tube Gallery and gravity-defying hair via Ashley Lim, to the illusions designed by Jeremy Pei. Polished performances from the adult ensemble are supported with adorable energy from Wild Rice’s First Stage! Kids.

It almost seems miserly to note that the script needed a few tweaks to make the story sing.

The relationship between Loo and his persistently affectionate nephew could have been fleshed out in a few more lines. The tension between the mandate for success and hunger for human connection in Singapore could also have been better displayed, perhaps through a little more of the nephew’s status-conscious friend.

That said, the production will delight audiences of all ages, especially children who like a bit of terror with their seasonal glee. It is a great introduction to theatre and a lovely year-ender for regular theatregoers. In other words, A $ingapore Carol hits the right note.