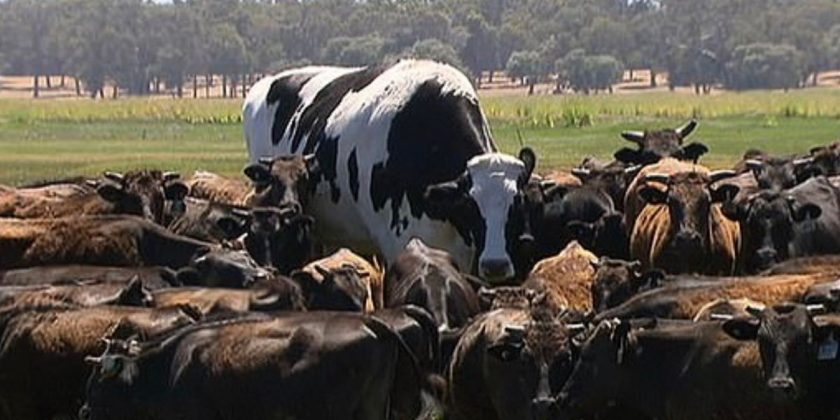 This tiny calf is tipped to be the world’s smallest cow.

Lil’ Bill weighs a teeny-weeny 4.5kg which is the same as a domestic cat and nearly a tenth of other cows his age.

The calf was taken to The Mississippi State University College of Veterinary Medicine, in the US, to be checked over after his owners worried he might be ill.

But thankfully, Lil’ Bill has been given a clean bill of health – he is just a lot smaller than his other farmyard pals.

Animal experts at the university shared the news of his arrival, which kicked up a huge fan base for the adorable cow.

They posted a photo of Lil’ Bill on their Facebook page with the caption: "Occasionally, we get a case that has us scratching our heads a bit. Lil’ Bill is one of those cases! He was born weighing a little over one-tenth of what newborn calves typically weigh."

Within hours he even had his own hashtag, #LilBill, and hundreds of comments asking after the cow’s welfare and generally admiring how cute he is.

Some followers even asked the vets to create a separate page just for Lil’ Bill so they can keep up with his progress.

Another said: "Lil Bill is adorable! Hope he is a healthy little man and makes it."

Many raised the question of Dwarfism, one person wrote: "Looking at the domed forehead, could he be a dwarf?"

The vets posted an update on the baby cow, writing: "Thank you all for your support and interest in #LilBill – who weighed just under 10 pounds when he came to us!

"At this time, we do not plan to create a separate page for him, but we will be posting updates about him regularly, so keep checking back!"

Knickers, an enormous black and white steer, measures a staggering 6ft4 and lives on a ranch in Western Australia.

Knickers weighs 1,400kg and is over 310 times the size of Lil’ Bill and is so huge that they can’t sell him for export.

So luckily for him, he will live out the rest of his days on his owner Geoff Pearson’s farm.

The world’s largest bovine, according to the Guinness Book of Records, is 2267kg and the tallest measured in at just over two metres.