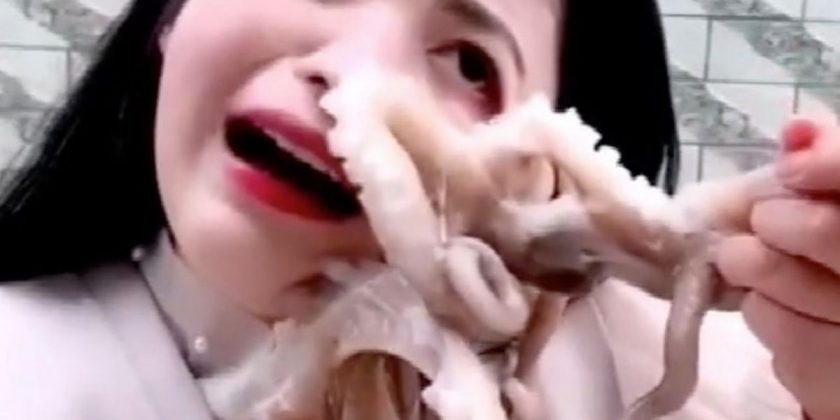 A blogger was left with a "disfigured face" after an octopus she tried to eat alive sucked on her face in a horrific video.

The woman, desperate for popularity for blog "seaside girl Little Seven", told her followers she intended to eat the creature.

But in the clip she put online, the octopus starts sucking on her face instead.

She's seen screaming and crying as she despairingly tries to yank the animal's tentacles of her skin.

In the 50-second clip, shared on popular short-video platform Kuaishou, the woman can first be heard telling her fans "look how hard it's sucking" as she tried to remove a tentacle from her upper lip.

But the pain becomes worse and the woman wrangles with the creature.

"I can't remove it," she is heard crying.

When she finally does so, she notices the small bloody wound on her cheek.

She cries: "My face is disfigured."

At the end of the clip, the host remembered her original goal as she shouted "I'll eat it in the next video".

An octopus typically uses its tentacles to catch prey or defend itself from potential attacks.

It uses its long and strong arms to wrap around the other animals and its suckers to tightly attach to its flesh.

A mature giant Pacific octopus has some 280 suckers on each arm, and each sucker contains thousands of chemical receptors.

But people online had little sympathy for the blogger, said to be from Lianyungang, China.

"An eye for an eye, a tooth for a tooth," another posted.