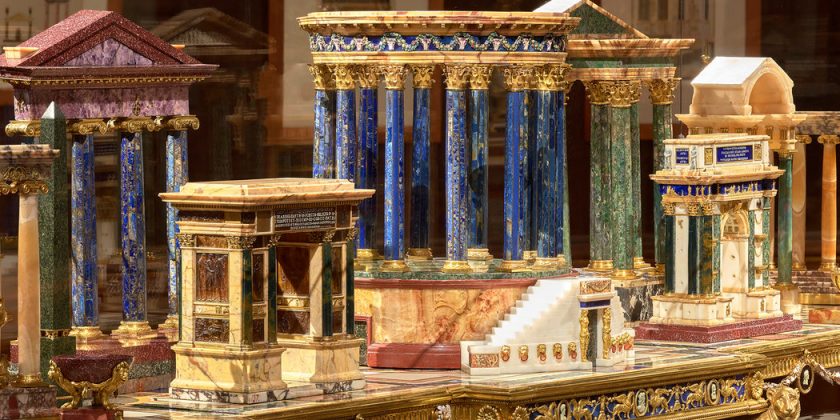 Money can’t buy you everything, but in 18th-century Rome, it could underwrite some pretty amazing acquisitions: a shoebox-size, neo-Classical, gilt silver casket for your wine; a Rococo clock consisting almost entirely of vivacious curves (not a straight line anywhere); or an exquisite bronze miniature of a famous Greek sculpture like the Apollo Belvedere, just the thing for a royal study.

On a more ambitious scale, surplus income might procure a complete gilt silver service for Mass in a private chapel or a large and astounding centerpiece called a deser, fit for banquets and made of small copies of temples from the Roman Forum in assorted marbles, semiprecious stones and antique cameos — each more gorgeous than the next. In all cases, the gilding of silver or bronze is done with gold, which creates a thin-skinned but luxurious radiance.

These ostentatious items would all have come from the bustling workshop of Luigi Valadier (1726-1785), among the most sought-after of Roman silversmiths who was, as well, an outstanding draftsman, designer, goldsmith and sculptor in bronze. And “you,” to be clear, would have been a member of a princely Italian family — a Borghese, Chigi or Orsini — an emissary of the King of Sweden, Madame du Barry or perhaps the Roman Catholic Church, in need of half-size gilt bronze and silver saints for the High Altar of the Cathedral of Monreale in Sicily. 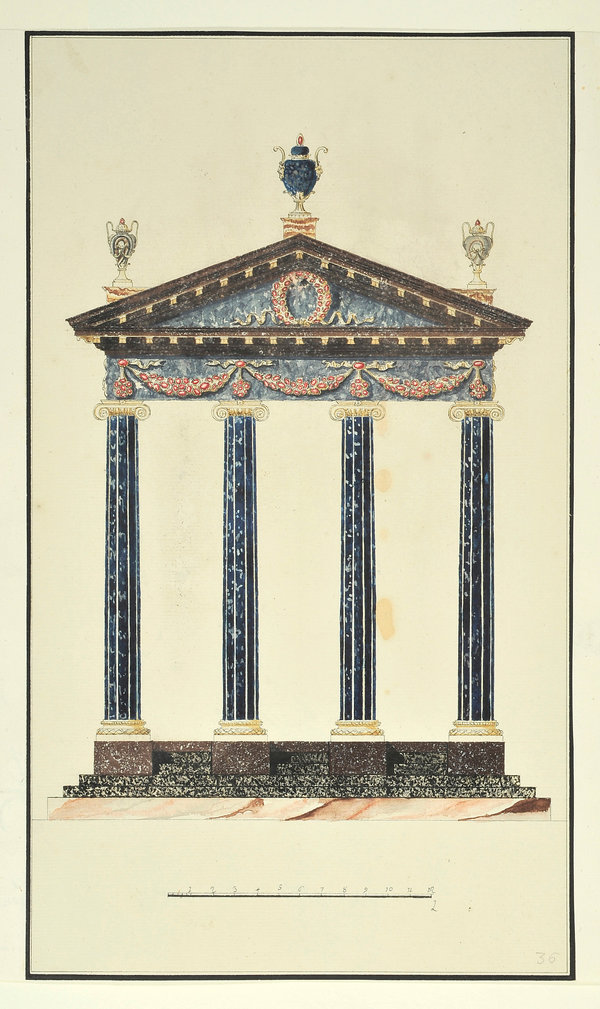 The fruits of Valadier’s versatile talent and fluid style are arrayed through three increasingly exciting galleries at the Frick Collection, in the first museum exhibition devoted to the artist in the United States. Two very different objects greet you at the beginning of “Luigi Valadier: Splendor in Eighteenth-Century Rome.”

One, relatively mundane, is an inventory of all the works, tools and materials from Valadier’s workshop, compiled after his death by his son Giuseppe, who collaborated with his father on some of the objects here. This document, acquired by the Frick in 2017, enabled art historians to reconstruct Valadier’s career and the remainder of his life’s works, whose survival rate seems to rise in direct proportion to its distance from Rome. It was crucial to the research of Alvar González-Palacios, a lifelong Valadier scholar who organized the exhibition with Xavier F. Salomon of the Frick and wrote its detailed catalog.

Nearby stands the Herm of Bacchus, a showstopping sculpture Valadier and his workshop created in 1773 for the Palazzo Borghese in Rome that now resides in the city’s Galleria Borghese. The nearly columnar body is made of a rare colored marble called alabastro a rosa, whose patterns of red and white evoke flowers, clouds, pooling water and mountain ranges, while the serene, almost mask-like face of its bronze head confirms that Valadier’s love of antiquity was not an exercise in mere copying. Above this visage, the restlessness of a thick mass of hair adorned with a wreath of delicate ivy leaves balances the quiet agitation of the marble. This work movingly celebrates the equal collaboration that may be special to the decorative arts: between the power of natural materials and ingenious human skill that brings out their glory.

Valadier’s career lasted only 25 years, a triumph brought down by a cardinal sin of the obscenely wealthy: the failure to pay bills. He was born to French parents in Rome, where his father, André (later Andrea), was a prominent goldsmith who trained Luigi, his eldest son, as Luigi would train Giuseppe, forming a three-generation dynasty. But while the workshop that Valadier established after his father’s death thrived, it was beset by soaring overhead and lagging receivables. The resulting stress seems to have become unbearable on Sept. 15, 1785, when Valadier, 59, threw himself into the Tiber and quickly drowned.

This exhibition has three acts: Secular, Ecclesiastic and, for lack of a better word, Miraculous. The first gallery holds objects for the home, albeit exceptionally grand ones, accompanied by a number of excellent drawings by the metalsmith. The attractions here include a massive ten-sided table with a porphyry top and an elaborate base adorned with large gilt bronze masks of the four seasons. In contrast, an oil lamp is so attenuated that it resembles an exotic flowering plant, in silver. The light of its four candles were magnified by reflections in a curved piece of silver bobbing at the end of a wire, like part of a Calder mobile. Tools for snuffing or trimming wicks, and the like, dangle from the candelabra, along with a small bell for summoning servants when all else fails.

The only other sign of real life is much grimmer.

The survivor of a set of four silver soup tureens themed to the seasons is here; it symbolizes winter, with the sculpted handle of its lid depicting the crouching form of a little barefooted waif, the wind at her back, tending a brazier. It would be nice to think she ruined someone’s dinner.

Valadier’s gifts expand in the spare gallery of Ecclesiastic objects, first with a poignant silver relief of the crucifixion of Saint Peter, who gracefully opens his arms as if to greet heaven, while the background quivers with the contrasting textures of rocks and trees. Such marvels multiply in the six silver half-size sculptures of saints from the High Altar in the Monreale Cathedral. Here the faces register character and emotion above garments whose refined textures include fur, embroidered trim, fringe and ordinary cloth seemingly created by thousands of punches with a pinpoint.

The show culminates in the Oval Room on the Frick’s ground floor, where the skills of Valadier’s workshop and his own love of antiquity are in full cry. The centerpiece, a deser tribute to the Roman Forum, occupies a long vitrine. It was frequently produced by Valadier’s workshop, but only three survive. This one, with five temples, two blocky triumphal arches, three obelisks and a decorated base, is the most complete. Having belonged to Charles V of Spain, it exists in two halves, each owned by museums in Madrid that are rarely united.

The temples have stunning color combinations, like the lavender marble entablature with garnet swags on the Temple of Mercury. Antique cameos and intaglios abound in other decorations. A pediment is fit with a triangular ivory relief that must have adorned a miniature temple during ancient times. For further excursions in the antique, the deser is flanked by two large cameos each about 6 by 8 inches, one in stone, one in glass, both depicting Bacchus. For each, Valadier created small ornate marble frames resting on miniature gild lions. Distinguishing his elements from ancient ones is a fascinating guessing game that demonstrates one culture literally building on another, appropriating yet making something new.

Empires come and go — but the decorative arts still cast their spell. 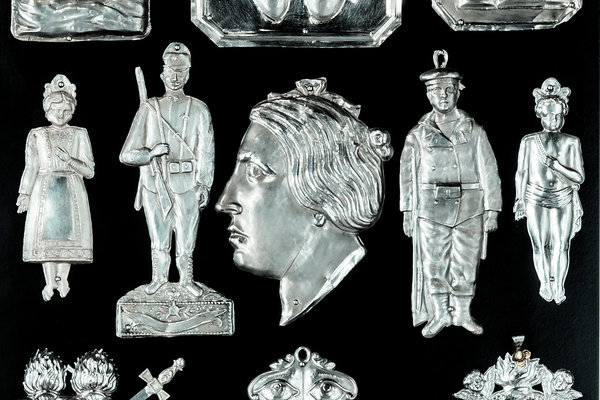 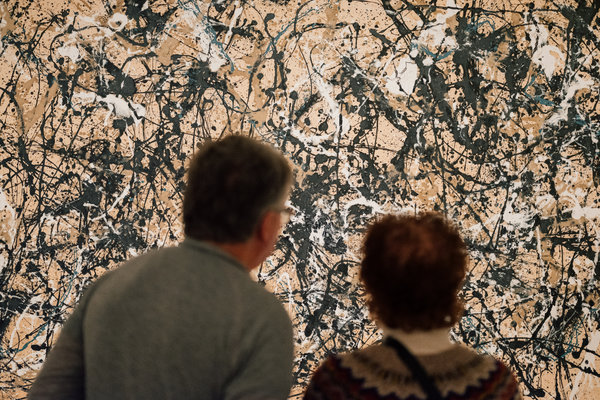 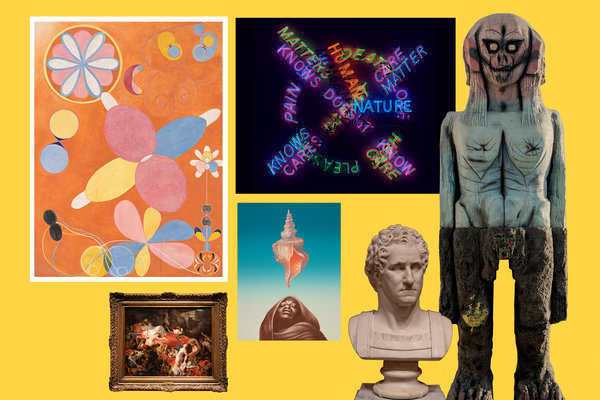