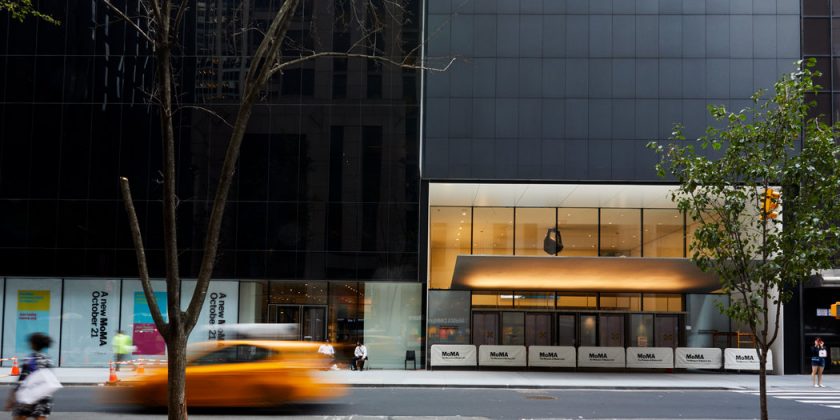 Stylish and surprisingly homey, the building, designed by Philip L. Goodwin and Edward Durell Stone, replaced four old brownstones. The neighborhood was mostly low-rise and residential back then, full of limestone rowhouses and Beaux-Arts townhouses. The Goodwin-Stone building landed on prewar 53rd Street like a U.F.O., planting the flag for modernism.

Ever since, the museum has ballooned on site. That’s never an easy thing to do in the middle of a busy block in the middle of Midtown. The story of the Modern, art aside, is one of those classic, ruthless New York real estate tales. The museum has gobbled up properties, conspired with developers, erected skyscrapers, torn down buildings in its way, built new ones and then sometimes torn those down too to make room for another reboot. During the ’50s and ’60s, Philip Johnson was in charge of expansions. During the ’80s, it was Cesar Pelli; in 2004, Yoshio Taniguchi.

Along the way, the Modern did a lot to transform 53rd Street into what is today a canyon of glass and steel that can bring to mind the headquarters of Darth Vader’s hedge fund.

Only 15 years after its last growth spurt, the Modern has now completed its latest metamorphosis. It’s smart, surgical, sprawling and slightly soulless.

The architects this time are Diller Scofidio + Renfro in collaboration with the global giant Gensler. DS+R, among other things, refurbished Lincoln Center and helped conceive the High Line and the Shed at Hudson Yards.

It has become a cliché and something of a crisis that art museums, along with a few commercial galleries, now believe they need to go big or go home, vying for our divided attention. The Modern has spent $450 million during the current makeover to add another 47,000 square feet of gallery space. Its goal is to show more of the vast collection but also partly to ease congestion by dispersing visitors around a bigger campus. Attendance, which was a million visitors per year during the 1970s, topped two million after Taniguchi, and reached three million by 2010, holding pretty much steady ever since. Mr. Taniguchi’s expansion squandered oodles of square footage on a dubious second-floor atrium, funneling visitors along narrow, aerial passageways and escalators that filled up like the 6 Train at rush hour.

Expansions tend to bring larger crowds. Transportation experts call the phenomenon induced demand: The more lanes you add to a traffic-jammed highway, the more cars will inevitably arrive to fill them.

Now comes the Modern’s westward push, which opens to the public on Oct. 21. We got a hint of its aesthetic when the architects unveiled their redo of the Goodwin-Stone interior a couple of years ago, repurposing upstairs galleries for temporary exhibitions, elegantly reconstructing the original Bauhaus staircase with steps that seemed to float on paper-thin sheets of steel and carving a lounge out of the new garden-facing lobby, filling it with Charlotte Perriand sofas and Grand Antique marble. It was all beautifully detailed and bolder than Mr. Taniguchi’s palette, if not much warmer.

MoMA’s new galleries pick up some of the same themes. They head west nearly half a block, through what used to be the American Folk Art Museum’s site and into the base of 53W53, a new supertall by Jean Nouvel. The exhibition spaces are what you’d expect: handsome white boxes, big and flexible, flowing into and out of Mr. Taniguchi’s galleries. The expansion in effect stretches like Silly Putty the existing circuit of rooms, spread across three floors, where MoMA unfurls its permanent collection.

Mr. Nouvel’s building, with its faceted geometry, nicely tapered profile and crisscrossing beams, has risen on land the museum sold some years ago to the development firm Hines, in return for space in the tower’s base. For the Modern, seamless access both into and out of 53W53 ultimately always depended on bulldozing the Folk Art Museum, a flawed but serendipitous sliver of a building designed by Tod Williams and Billie Tsien, with a textured, tooled-bronze facade, the last architectural outlier on 53rd Street. Its demolition justly enraged many advocates of contemporary architecture.

How you judge current MoMA expansion may depend on whether you buy into the museum’s Manifest Destiny argument.

The architects have replaced Folk Art with a Jenga-like arrangement of sectionally linked exhibition and performance spaces facing onto 53rd Street. The spaces include a sound studio and ground-floor galleries for changing displays that will be free to anyone who walks in, visible, like a shop window, from outside.

I had my doubts about these galleries when they were first announced. They seemed a vague excuse to burrow a passageway to the Nouvel building. But they turned out to be one of the best parts of the expansion, making possible new programming at the museum and gesturing, in a way much of the rest of the museum doesn’t quite manage, toward the city at large.

In Mr. Taniguchi’s 2004 renovation, visitors entered through a tunnellike lobby that stretched between 53rd and 54th Streets. They checked coats and turned east into a tall vestibule facing the sculpture garden. The sequence of compression and release was a nice idea, exploiting the centrality of the museum’s garden. But the tunnel was about as inviting as an airport concourse.

The Museum That Ate the Block

The Museum of Modern Art’s most recent expansion, set to open to the public on Oct. 21, extends its footprint as far to the west as it will probably be able to go. This is just the latest in the museum’s series of expansions, which have have occurred regularly since it was built in 1939. 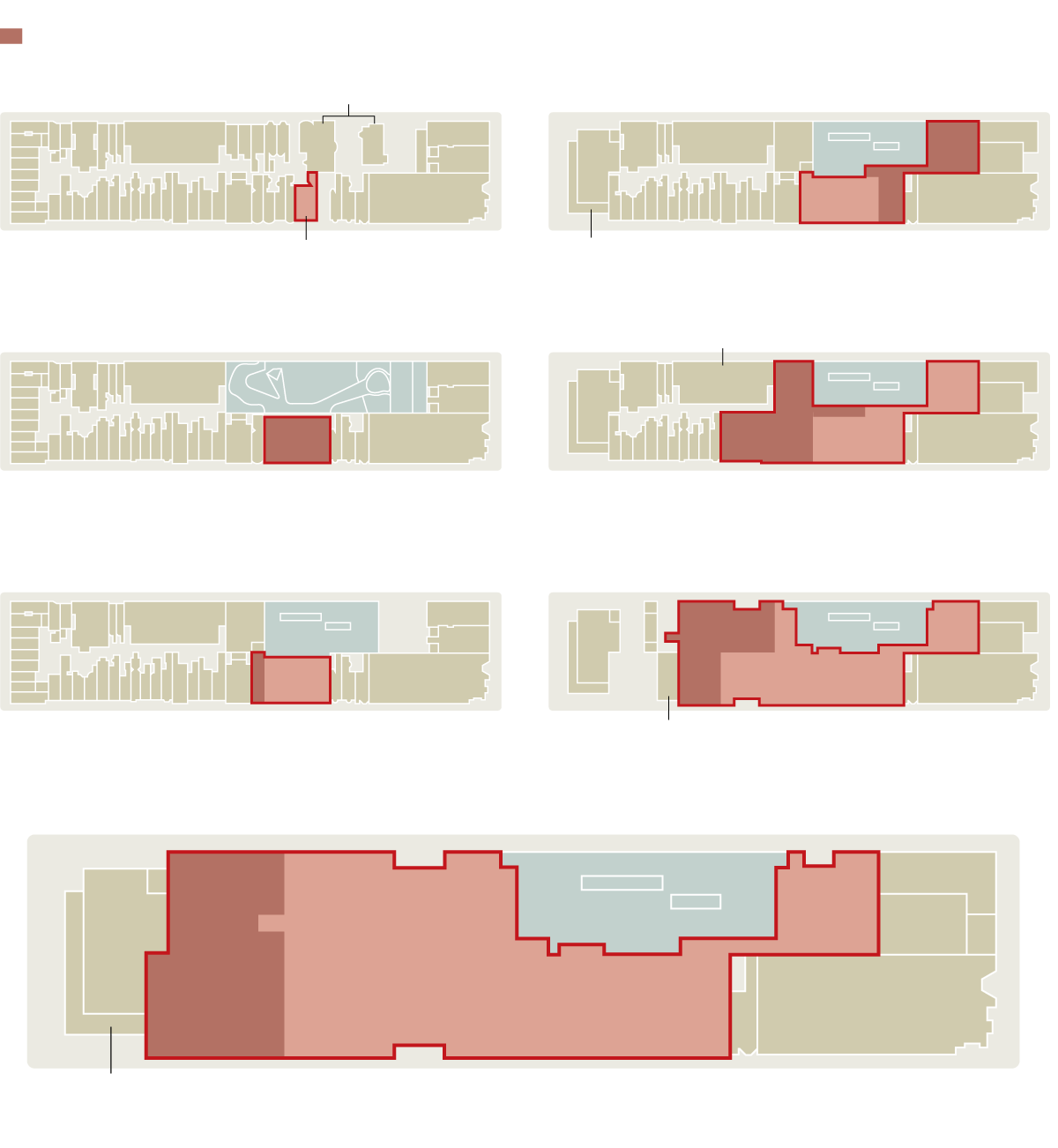 NOT SURE OF FOOTPRINT

NOT SURE OF FOOTPRINT

In the new configuration, a canopy, sleek as a knife, now cantilevers over the 53rd Street sidewalk to signal more clearly the museum’s presence. A datum plane, subtly inserted just above the ground floor window level, attempts to tie MoMA’s episodic facades together. Inside, the architects raised the ceiling of Mr. Taniguchi’s lobby on the south side, moving a gift shop into the basement to allow unobstructed views toward the new West Wing and punching windows into second-floor exhibition spaces.

You may feel like you’re entering an Apple store. Everything is crisp and coolly engineered. “Hello. Again.” is painted on a long white wall, recalling an Apple tagline. From the ticket desk signs point you toward what’s on view in the Taniguchi building to the east and also in the galleries to the west, where a bank of elevators and a staircase beckon.

The staircase is clad in suave, stained panels of micro-perforated bird’s-eye maple, cantilevered from a slender sheet of steel connected to the ceiling, the whole thing suspended almost like a mobile. On the top floor is a Danny Meyer restaurant with a terrace, art, a black-felt ceiling and more Grand Antique marble. It replaces the ill-conceived cafe at the fifth-floor entrance to the galleries in the Taniguchi building, where the smell of shrimp and asparagus soup mingled with the Seurats and Cézannes.

Much is now being made of the fact that the new, enlarged circuit of permanent collection galleries with its multiple entry points dovetails with the Modern’s updated mission. Gone are the days when the museum told a single story about modern art as a sequence of -isms, expressed in linear fashion. It was, arguably, a seductive story, like a tale by Borges. But there is no single, vectored history of modernism. There are many diverse histories, which visitors can now discover as they choose.

Of course we’ve heard this before. “We cannot say any longer that we are handicapped by lack of space or equipment or technology,” one of the museum’s chief curators told The New York Times on the occasion of the Modern’s 1980s supersizing. “We have enough exhibit space, storage space and study space so that our primary problem now is love, talent, energy and passion.”

Actually, the problem back then turned out to be that Pelli’s expansion transformed the Modern into what looked like a suburban shopping mall. It didn’t solve the problems of space, modernism or love. And neither did the expansion that replaced it.

I suspect droves of visitors to the new Modern will still try to make a beeline for “The Starry Night.” They’ll want to know where the museum starts. Sociologists and executives at Trader Joe’s will tell you that consumers don’t actually like having too many choices. The new layout will require lots of signs, staff in the halls to direct people, apps and maps. We’ll see if visitors find it liberating or confusing.

What the architects have done is refined and tactical. It marginalizes the garden, which is a pity. The garden is the historic heart of MoMA. Maybe that’s one reason, for all its intelligence and skill and its obvious desire to make the place feel friendlier, the expansion seems to me not to have solved the problem of the Modern’s ambience.

I have sometimes gone through a thought exercise, as the museum cycled through its previous two expansions: What if, instead of doubling down on Midtown, it had, like, say, the Whitney, ventured to Brooklyn or Queens or the West Side. New York is multicentered now. The Modern could have been reborn. It could have altered the city’s cultural weather.

Officials at the museum tell me they anticipate this latest revamp will bump attendance up to around 3.5 million visitors a year. No doubt, after some time it will reboot again. Richard Oldenburg, the museum’s director during the Pelli enlargement, described the Modern as “a place where you can see the whole development of the modern movement, but which you feel you can still capture, at least remotely, on a single visit.”

This is no longer that museum, as the current director, Glenn D. Lowry, acknowledged the other day. “It’s always going to be a work in progress,” he said.

Fair enough, I suppose. A work in progress like the Modern’s architecture and the idea of modernism itself.

Michael Kimmelman is the architecture critic. He was previously The Times’s chief art critic and, based in Berlin, created the Abroad column, covering cultural and political affairs across Europe and the Middle East. @kimmelman