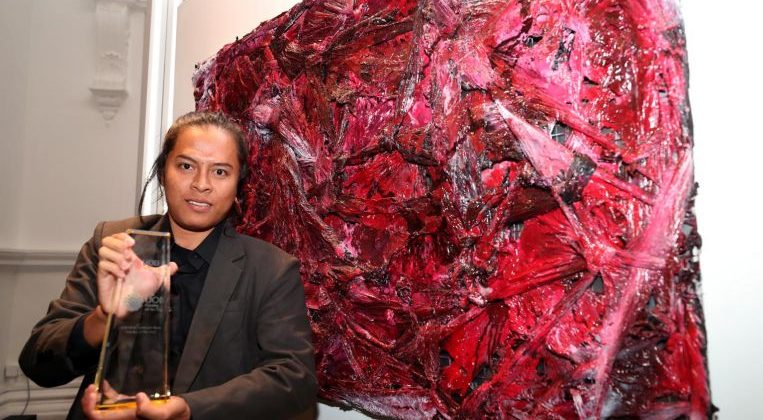 SINGAPORE- Indonesian artist Suvi Wahyudianto’s mother wanted him to find a steady job, but she may now finally approve of his artistic pursuits.

His mixed-media work titled Angs’t (ANGST), created with plastic enamel and resin on aluminium, was chosen by judges as the best among the four national winners of the UOB Painting of the Year award.

The bank has given out a painting prize annually in Singapore since 1982, in Thailand since 2010, and Malaysia and Indonesia since 2011.

Suvi’s work also won the UOB Painting of the Year award for Indonesia, worth 250 million rupiah (S$23,000), and he is the youngest winner of the national award in his country.

The youngest winner from Singapore was named in 2005, when Alvin Ong, then 16, won for his acrylic painting titled The Window.

This year’s Singapore winner was 28-year-old Khairulddin Abdul Wahab, who received $25,000 for his acrylic-on-linen painting Rite Of Passage. It depicts a mystic oil bath ritual, which is part of the silat martial-art practice.

This was Suvi’s second try at the prize after a 2016 attempt that got him to the finals, but not the first prize. “It’s quite a prestigious competition and quite an achievement for artists to participate and, of course, win,” he says through an interpreter.

He does not remember much about his 2016 entry, but this year’s came from an unforgettable time in his past.

He come from the Indonesian island of Madura and many in his village were migrant workers – his mother worked as a domestic helper in Malaysia. He and his elder sister and younger brother were looked after by relatives while she was away.

In 2001, a civil war broke out between the Dayak tribesmen in Kalimantan and the Madurese migrants.

“I wanted to make a work of art that focused on tragedy and wounds,” he says of Angs’t, which recalls the universal red-and-pink tissue that lies under all human skin. “It’s my way of encouraging people to have empathy for others. The message I’ve tried to convey is for people to look under the skin – regardless of social status, we are all the same.”

The artist, who graduated from Unesas, the State University of Surabaya, lives in Yogyakarta and plans to use his prize money to pay for a studio. Later, he hopes to start a small arts community in Madura to encourage more people to create contemporary art.

“I came from a broken home and though a lot of my friends were affected by the fact that their families were falling apart, I believe art saved me,” he says.

The winning paintings from the 2018 UOB Painting of the Year competition will be exhibited at the UOB Art Gallery, UOB Plaza 1 at 80 Raffles Place from Nov 9 to end-February next year.