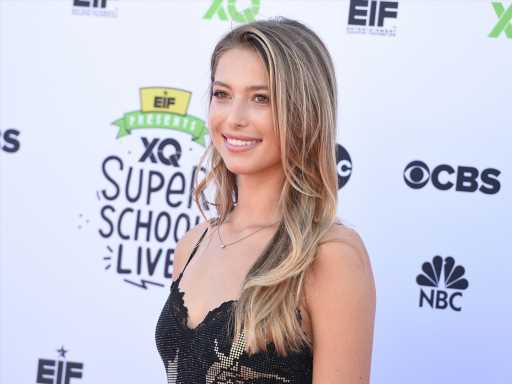 Steve Jobs’ 22-year-old daughter Eve Jobs is all grown up and just starting to build a public image for herself outside of the highly sequestered world of professional equestrians, debuting a Glossier ad in Dec. 2020 that showed off her striking features. Even more telling than her foray into modeling may be her new boyfriend, longtime Kylie Jenner friend Harry Hudson, with whom Eve has recently made things IG official with a series of romantic photos. As a frequent guest star on Jenner’s reality series Keeping Up With the Kardashians, 27-year-old Hudson is far from having a low profile — and may be a sign that Eve is feeling more comfortable stepping into the spotlight.

Eve is the daughter of Steve Jobs and wife Laurene Powell and a Stanford student, raised in Palo Alto, California. Hudson, born in New Jersey, made his way out to Los Angeles while growing up and became friends with Kendall and Kylie Jenner as well as Willow and Jaden Smith, all of whom helped promote his music career and paved the way for the 2018 release of his first album Yesterday’s Tomorrow Night.

Hudson has been vocal about the Hodgkin’s lymphoma diagnosis at age 20 that changed his life, speaking out throughout his eight months of chemotherapy and subsequent fundraising initiatives for teen cancer. His vulnerable journey in the public eye and frequent guest spots on KUWTK as a Jenner bestie have made him a fast favorite among fans of the show and the Jenners in general, and we can’t help but wonder how Eve’s relationship with him will play out in the public eye.

As KUWTK‘s final season approaches, Eve Jobs is gearing up for her first-ever season of dating a member of the Kardashian’s inner circle and we’re eager to see just how much she’s willing to share.

Before you go, click here to see the net worth of 15 mega-rich celebrity kids.