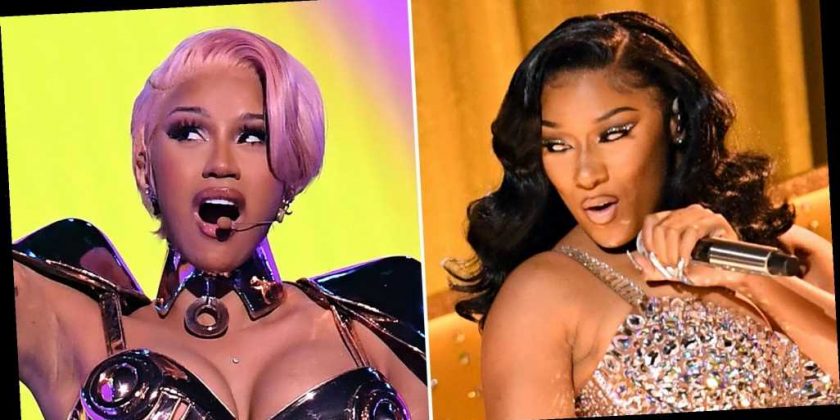 “WAP” stand for wild a—s performance, right? Megan Thee Stallion performed her hits “Savage (Remix)” and “WAP” at the 2021 Grammy Awards on Sunday, March 14, and fans had a lot to say.

See What the Stars Wore on the 2021 Grammys Red Carpet

“If you pull out tap shoes i’m automatically in love with the performance it was all Exquisite,” one fan wrote after Cardi B came out to join Megan, 26. “Maybe it’s just been a long year but seeing Megan and Cardi do WAP under a giant Pleaser is making me cry,” another said.

The performance, which Megan began solo before the 28-year-old rapper joined her for “WAP,” also garnered attention for its set — a stage-sized bed, giant high heel and stripper pole.

“Imagine the weighted blanket that would cover a bed the size of the one from that WAP performance. Anyway, just sold my car and used my stimmy check to buy that blanket to use in a park, I guess,” a third Twitter user wrote.

While “WAP” won’t be eligible to win a Grammy until next year, “Savage (Remix)” won both the Best Rap Performance and Best Rap Song at the 2021 Awards.

Grammys 2021: See the Full List of Nominees and Winners

Megan, who accepted the Best Rap Performance award via video chat before the broadcast started, was speechless for a few seconds before letting out a few happy screams.

The Houston natives made headlines in April 2020 when they released the remix of Megan’s hit song to raise money for COVID-19 efforts. All artist proceeds from the duet were promised to Bread of Life Houston in order to “support [the] city during [the] pandemic.”

“I’m literally crying 😭 being from HOUSTON MF TEXAS this s–t means EVERYTHING to me,” Megan wrote via Instagram after releasing the hit. “SAVAGE REMIX FT THE QUEEN @BEYONCE OUT NOW!”

The song quickly climbed to the top of Billboard Hot 100, becoming the rapper’s first music to make the list. In an August 2020 interview with Variety, Megan talked about her relationship to the iconic “Lemonade” artist.

“I feel like I am family. We talk all the time,” she said at the time.

Stars Who Have Broken Grammy Records: Beyonce, Adele and More

Though the “Halo” singer didn’t perform her hit song with Megan, she did join her on stage to accept the Best Rap Song award. Earlier in the evening, Megan also won the coveted Best New Artist award, accepting the honor with a tearful acceptance speech.

Beyoncé for her part, made history during the evening when she broke the record for most Grammys ever won by a woman with 28 awards. The singer’s 9-year-old daughter, Blue Ivy Carter, also won her first Grammy for appearing in her mom’s “Brown Skin Girl” music video.