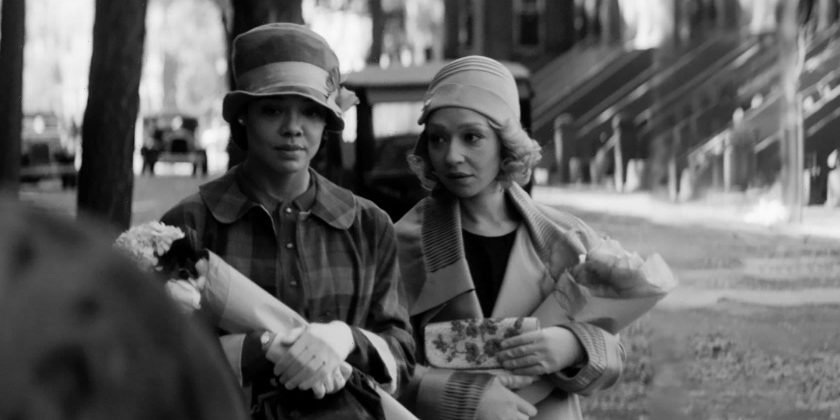 Passing highlights the gut-wrenching reality of being mixed-race in 1920s America in Rebecca Hall’s stunning debut.

As a person of colour, I’ve often experienced the duality of battling between two sides of myself and what it means to be Black and British. Whether it’s feeling too westernised in spaces where I am surrounded by Caribbean culture or seamlessly code-switching in places where I was the minority, I’ve often tugged at that dual identity that exists within me and wondered how to navigate those spaces authentically.

But even amidst that, my Blackness as a whole is something I’ve never debated and has never been called to question – something we know that many mixed-race people have faced and reckoned with.

Whether it’s relating to one side of the family, or feeling a need to pick a side in order to survive, navigating a world that prefers to label things in Black and white can be tricky for those who exist in the in-between.

That’s the focus ofRebecca Hall’s new drama Passing, which beautifully examines the concept of racial ‘passing’ in a way that feels nuanced and acknowledges this crucial aspect of American history which is rarely discussed.

The black-and-white film is an adaptation of late novelist Nella Larsen’s book of the same name, which explores the complexities of race, gender and social class in the 1920s, through the eyes of two childhood friends.

The movie follows Irene (Tessa Thompson) and Clare (Ruth Negga), two mixed-race women who were former school friends and happen to run into each other in an upscale Manhattan hotel in prohibition-era America.

As we watch the two interact with one another, we can see that they’re both in the act of racial passing as white women– but it’s during these moments that we realise just to what extent.

While Irene is married to African American doctor Brian (André Holland), has two Black sons and lives in an elegant brownstone in the heart of Harlem, Clare is living her very best white life with her wealthy white husband John (Alexander Skarsgård) who is none the wiser of her true identity.

The contrast between Irene and Clare is stark and plays beautifully on screen. While both “passing”unbeknownst to the white people seated right next to them, their true identities couldn’t be any clearer to the audience.

Ruth Negga as Clare and Alexander Skarsgard as John in Passing

While the respectable yet restrained Irene, played brilliantly by Thompson and the vivacious peroxide blonde Clare continue to make small talk, the story dives headfirst as the meeting between the two serves as a catalyst for Clare to connect with her Black identity, and thus the people in Irene’s life.

It’s here that the drama truly begins to unfold as a lonely Clare, in her unhappy marriage with her racist husband, begins to infiltrate Irene’s life, turning up at her home out of the blue and accompanying Irene to her and her husband’s get-togethers at the height of the Harlem Renaissance.

Irene, while at first not keen to welcome Clare back into her life, eventually does so and Clare is truly the life of the party with a flapper-girl flair that is hard to ignore.

She is the centre of the attention, the apple of everyone’s eye (including Irene’s husband it seems)  much to the chagrin of Irene who soon begins to resent Clare’s presence in every aspect of her life.

Thompson is able to create that stirring sense of jealousy as the film goes on and we see the frustration etched on her face as she simmers with envy.

This dramatic turn between the two characters’ dynamic is further enhanced by the eerie jazz score from artist Devonté Hynes and the film which is shot in a boxy yet intimate 4:3, that makes you feel like you’re intruding in on moments that you maybe shouldn’t be apart of.

But while the film is centred around the complexities of these two women passing as biracial, there is a recurring theme of safety that really rings true today.

Andre Holland as Brian and Tessa Thompson as Irene in Passing

For Clare, safety was constantly a concern. While she identified as mixed-race, she feared poverty and the reality of what her future could look like if she stayed the same. By passing as white, she felt a level of safety thanks to her elevated status in society accompanied by her white husband – but that came with another burgeoning fear of him finding out her true identity.

This desire to feel safe is something many people of colour can relate to and it’s a theme seamlessly threaded throughout Passing in a subtle yet poignant way.

The feeling of needing to choose a side is also vividly brought to life in Passing and Hall does a brilliant job of portraying the confusion and perplexing issues that can come when you exist between two worlds.

While this story speaks to the past and sheds light on a part of history that still remains largely uncovered, there is something about it that truly feels timely today.

Passing is available in selected cinemas now and on Netflix from Wednesday 10 November.