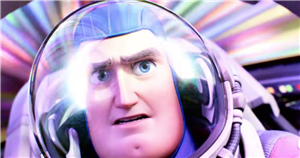 The highly anticipated “Toy Story” spinoff movie “Lightyear” is tapping into the nostalgia of the long-running franchise with a refreshing new story that centers around one of the franchise’s most popular characters: Buzz Lightyear. The spinoff film centers around astronaut Buzz Lightyear, the real character that inspired the toy we all know and love from the “Toy Story” movies.

Fans of Disney and Pixar movies, especially the “Toy Story” franchise, are curious if “Lightyear” will follow in the footsteps of other predecessors like “Luca” and most recently, “Turning Red,” and be released exclusively on Disney+, or if it’ll only be available in theaters. Ahead of its release on June 17, here is where you can watch “Lightyear” and when you can stream the film.

What is “Lightyear” About?

Veteran space ranger Buzz Lightyear has been stationed on a planet with a space crew for one year. When the Star Command ship is finally ready to be tested, Buzz is the first person to volunteer and travel through space. During a test flight, he is launched into a wormhole that manipulates time, taking him 62 years into the future to a new planet. As he is trying to get back home, Buzz must also fight against the alien Emperor Zurg, who seeks to destroy everything and everyone in sight.

Will “Lightyear” Be Available to Stream?

At this time, “Lightyear” is set to have an exclusive theatrical release and will not be available to stream right away. Unfortunately, there is no news regarding when the film will hit Disney+ yet.

When Will “Lightyear” Be Available to Stream on Disney+?

At the height of the coronavirus pandemic, Disney released a handful of new titles on Disney+, including “Soul,” “Luca,” and “Turning Red” to incentivize viewership while people were out of theaters and confined to their homes. As the country is slowly getting back to normal, Disney is giving its titles theatrical releases again. While there has not been any type of confirmation regarding when “Lightyear” will hit the streamer, there is a strong chance it could follow in the footsteps of “Encanto,” which had an exclusive 30-day theatrical release before going to Disney+, per Variety.

If this is the case, viewers can expect to see “Lightyear” on the streamer sometime in mid-July.

Catch Buzz Lightyear’s origin story in “Lightyear,” which hits theaters June 17 and watch the trailer below!