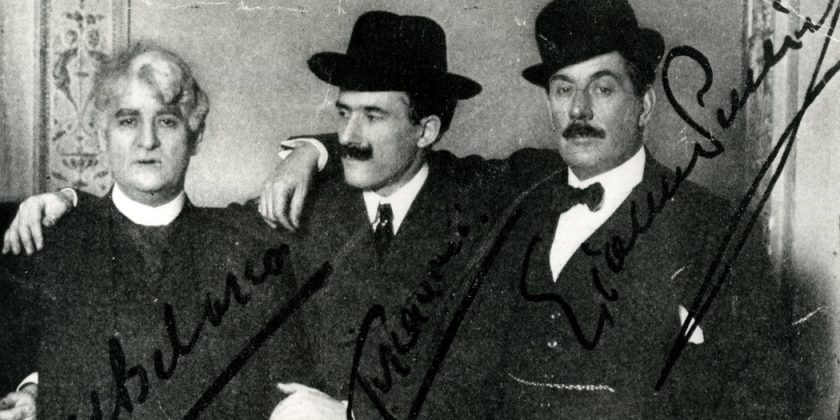 He visited Little Italy and Chinatown, posed for pictures on the Brooklyn Bridge, marveled at the tall buildings and took in shows. He played cards in the back room of an Italian restaurant on 34th Street with the tenor Enrico Caruso. He was the toast of Gilded Age New York, thronged by reporters and cheered on by Vanderbilts and Astors.

Giacomo Puccini was a quintessentially Italian composer — “La Bohème” and “Tosca” remain opera house staples, more than a century after they were written — but his career was also shaped by the time he spent in New York.

He visited twice: The Metropolitan Opera brought him over in 1907 to oversee its first productions of “Manon Lescaut” and “Madama Butterfly,” then again in 1910 when it staged the world premiere of his American-themed opera, “La Fanciulla del West.” In 1918, the Met gave the premiere of “Il Trittico” — which the company is reviving Nov. 23 to Dec. 15, with a cast including Plácido Domingo, to mark the work’s centennial — but World War I kept Puccini from the opening.

Puccini’s New York visits were filled with incident and intrigue, success and frustration. They are reminders that golden ages may not always sparkle as brightly to those who live through them. (After the Met’s “Butterfly” in 1907, Puccini groused to a friend about the great Caruso. “He won’t learn anything, he’s lazy and he’s too pleased with himself,” he wrote, conceding that “all the same his voice is magnificent.”)

A dash from the steamship to the stage

He almost missed his first Met opening. Puccini — a superstar in an era when opera was popular entertainment — was paid a hefty fee to come to New York in the winter of 1907. He was supposed to begin his stay by overseeing the final rehearsals of “Manon Lescaut.”

But his steamship was late.

The Met brought him over in style, aboard the Kaiserin Auguste Victoria. He delighted in the ship’s luxuries, including the 70 electric light bulbs illuminating his cabin. But it was a rough crossing, and his ship did not arrive in Hoboken until opening night.

Reporters were waiting for him when he docked, and he told them he was already thinking about his next project: He had “some thought of writing an opera with Western America as a backdrop,” he said, and hoped to get in touch with David Belasco. Puccini had made Belasco’s “Madame Butterfly” into an opera and would adapt his “Girl of the Golden West” as “La Fanciulla del West.”

Puccini made it into New York with just enough time to for a quick dinner at the Hotel Astor before he was whisked by carriage to the Met — where the orchestra played a fanfare as he arrived in his box. The crowd went wild. When he was brought on stage for curtain calls, The New York Times reported, “he stood very much embarrassed, and the applause was deafening.”

“New York is extraordinary!” he wrote to a colleague.

In another letter, he extolled the city’s tall buildings — which had 25 or 30 floors, he noted — and the beauty of the evening lights, but complained about how expensive everything was. He also lamented that his workload was keeping him from seeing much of New York, and allowed that he preferred London and Paris. But he took special note of the beauty of American women.

“It’s enough to make the Leaning Tower of Pisa stand up straight!” he wrote in one letter, adding that his wife, Elvira, was as jealous as Othello but insisting that he had behaved.

There were intrigues. One biographer, Mary Jane Phillips-Matz, wrote that Elvira made Puccini retrieve a ring from a woman he had been courting at the Met, and that she once discovered a note from another woman tucked into the band of his top hat.

Puccini did not speak English, which sometimes left him feeling isolated, and he loathed the cold. Caruso was his constant companion — window-shopping for fancy clothes and expensive automobiles, a passion of Puccini’s. They often dined at Del Pezzo’s, an Italian restaurant on 34th Street, and played the card game scopa in the back. Caruso tended to win until, legend has it, the other players had a mirror placed behind his chair.

It was during that first trip to New York that Puccini attended one of the most notorious performances in opera history: the American premiere of Richard Strauss’s “Salome.”

He liked it. Before the premiere, in a wide-ranging interview with The Times in his suite at the Hotel Astor — which was interrupted at one point by a bellboy carrying a card mistakenly addressed to “Mr. Rossini” — Puccini proclaimed that “Salome” was the greatest modern opera.

Based on Oscar Wilde’s play of lust, violence and religion, the opera shocked conservative Met patrons with its dance of the seven veils and its heroine’s climactic kiss of John the Baptist’s severed head. Under pressure from its board, the Met canceled the rest of its run and did not perform “Salome” again until 1934. The episode left a mark on Puccini.

A few months later, when he decided to abandon an opera he had been considering, “Conchita,” based on a psychosexual drama by Pierre Louÿs, Puccini wrote to his disappointed publishers, insisting he had not been influenced by the debacle. “It was not fear (confound the word!) of the prudery of the Anglo-Saxon audiences of Europe and America,” he said. “It was not the example of ‘Salome’ in New York.”

By the time this trip ended he was ready to go home. He wrote Sybil Seligman, an English friend and confidante, “I’ve had all I want of America — at the opera all is well, and ‘Madama Butterfly’ was excellent, but lacked the poetry which I put into it.”

A golden night at the opera

The Met Opera’s archives contain a copy of the contract that brought Puccini back to New York in 1910 for the premiere of “La Fanciulla del West.” To promises of pay, expenses, and room and board, one more is added in handwriting: “cars.”

Staging the premiere of “Fanciulla” was a coup for the Met. For Puccini, it offered a chance to shine after a painful period of his life.

His wife had accused their young maid, Doria Manfredi, of having an affair with Puccini at their home in Torre del Lago, Italy — leading the young woman to poison herself in 1909. Amid scandal, Puccini was trying to finish “Fanciulla,” or “The Girl.”

He arrived in New York in a different mood entirely, after a comfortable, on-time passage in the imperial suite of the George Washington. (“Praise be to the Metropolitan!” he wrote his publisher.) And he immediately jumped into a whirlwind of rehearsals and publicity.

He gave a news conference at the Met, where he declared that he would like to write a comic opera — “No more heart throbs,” he said — and gave his views of the future of the art. “I believe that modern music drama is going to be simpler and simpler,” he said.

The pre-opera publicity was not always highbrow, “Every Woman a Song and Nothing More, to Puccini,” was the headline on an Evening Mail story. “And what — I hesitated in framing the time-honored question, but it popped out before I could shut my mouth in time — do you think of American women?” the reporter wrote. “I do not think of them!” was Puccini’s reply.

But the publicity worked. The Met doubled its prices for the “Fanciulla” premiere on Dec. 10 — $2 for tickets in the rear of the Family Circle and $10 for orchestra seats. Scalpers reportedly tried to sell them for as much as $150.

It was an epic night: a new Puccini opera starring Caruso, conducted by Toscanini, directed by Belasco. The opera, and the after-party, drew the upper-upper crust of New York society, like John Jacob Astor; J.P. Morgan; Nicholas Murray Butler, the president of Columbia University; and people with the last names Belmont, Vanderbilt, Juilliard, Guggenheim.

It was front-page news the next day in The Times. “My heart is beating like the double basses in the card scene,” a pleased Puccini was quoted as saying.

A world premiere without the composer

The Met staged another Puccini world premiere in 1918: his triple bill “Il Trittico,” made up of “Il Tabarro,” “Suor Angelica” and the popular comedy “Gianni Schicchi” — perhaps the comic piece he had imagined eight years earlier? (Fans of the Marx Brothers’ “A Night at the Opera” may be interested to learn that the contract securing the rights to the premiere actually refers to “the party of the first part.”)

But Puccini did not come.

As the opera was being planned, World War I still raged. And the Armistice was signed only a little over a month before opening night.

Giulio Gatti-Casazza, the Met’s general manager at the time, wrote in his memoir that there was still talk of mines in the oceans. But Puccini wrote him before the opening.

“Could I have foreseen the sudden collapse of our enemies,” Puccini wrote, “I certainly should have been helping celebrate the glorious victory in New York.”