Careen Williams had all the elements to make her life happy: a job helping patients at a medical center, a marriage to a childhood friend from Jamaica and a healthy child.

But when her son, Caiden, whom she calls C. J., approached 2 years old, things began to change.

“He was a healthy baby boy, met all of his milestones until 20 months or so, when I started to notice different behavior,” Ms. Williams said. “He would just stand right here and stare out the window, or walking on toe point or flapping his hands. I figured something was wrong.”

A psychologist diagnosed her son with autism, a disorder that Ms. Williams, 42, said she was clueless about. At first, she was depressed and in denial, but after a few months, she began to learn more about her son’s condition and got to work.

“I just got up, and I’m like, ‘O.K., enough is enough,’” she recalled in an interview last month at her home on Staten Island. She began doing research, talking to other parents of children with autism, reading blog posts and reaching out to therapists and programs. 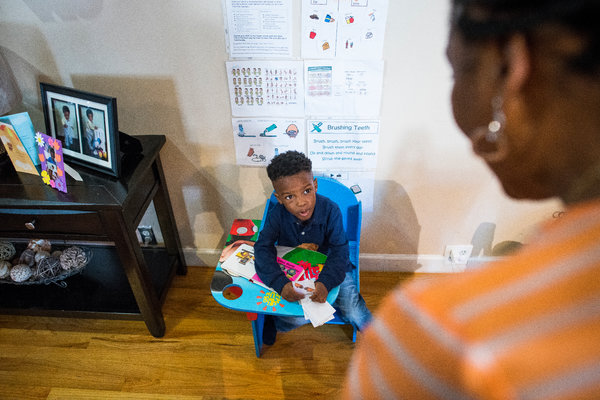 On top of the autism, C. J. also has an eating disorder called pica, which drives him to consume items like zippers and metal buttons and chew through phone chargers.

C. J. is 5 now, and other parents at his school call Ms. Williams “Supermom” for her dedication to her son and the progress he has made. He makes up his own tunes to the alphabet, watches educational videos and even taught himself some French. He loves to sing, so Ms. Williams found a music therapy program for children with autism. He also undergoes aquatic therapy at the local Jewish Community Center and occupational therapy at NYU Langone Medical Center.

To provide her son with the care he needs, though, Ms. Williams had to delay her dream of nursing school. Her marriage broke up amid the stress. She had to stop working double shifts and sending money to family in Jamaica. (Ms. Williams moved to the United States when she was 26.)

Then last year, C. J.’s intense meltdowns aggravated an old back injury. An M.R.I. showed three problem areas on her spine, including a pinched nerve that caused intense back spasms. The pain has forced Ms. Williams to walk with a cane and, in March, to take a leave of absence from her job as a patient unit associate at NYU Langone. Today, she can barely stand up to make dinner.

Now she has fallen behind economically herself: one month late on rent, two months behind on car payments and $60,000 in student debt from her undergraduate studies. She has received multiple electricity cutoff notices and was just denied Social Security benefits. She cannot afford the $1,100 she still owes Borough of Manhattan Community College to receive her undergraduate transcript so that she can complete her application to the nursing program at Medgar Evers College in Brooklyn.

“Earlier this year, it was just so much. It was so hard,” she said. “I just wanted to numb the pain because everywhere I turned was a roadblock, and I couldn’t see my way out. I just wanted to commit suicide.”

Ms. Williams said she suffers from crippling back pain every day, but C. J. remains her “greatest motivation.”

Knowing that she had a child who depended on her, Ms. Williams began seeing a psychologist every week. “That’s what helped save me,” she said. Now she is determined to heal, both emotionally and physically.

Ms. Williams was also introduced by a parent at C. J.’s school to the Metropolitan Council on Jewish Poverty, a beneficiary agency of UJA-Federation of New York, one of the eight organizations supported by The New York Times Neediest Cases Fund. The council provided her with $1,550 to make a rent payment in May and $568 for a Con Edison utility payment.

Ms. Williams spends much of her time now at doctor appointments and filing paperwork for C. J. She has considered starting a business to help parents of children with autism and similar conditions coordinate the necessary forms and enroll in programs.

“There are people out there who have been through it, who can help them and comfort them,” she said. “It’s not easy dealing with an autistic child, especially as a single mom.”

C. J. motivates her every day.

“He makes me laugh, we’re very close,” she said, smiling. “He likes to come and cuddle, and likes it when I kiss him on the chin. He always puts a smile on my face.

“He’s my greatest motivation. And for myself, you make these goals you want to achieve. You don’t want to go through life like you’re a failure.”