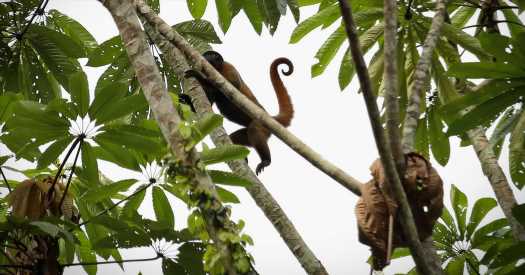 NATURE: UNDERCOVER IN THE JUNGLE 8 p.m. on PBS (check local listings). If a puma falls in the Amazon and nobody is around to see, does the animal look embarrassed? It’s a question that may be answered in this documentary, which was filmed with a fleet of remotely operated cameras left rolling in the Ecuador wilderness for a month. The film is a nature doc with a meta twist: It showcases both a wide range of species and the means by which the footage was captured. The creatures shown include sunbathing bats, yellow-headed vultures and tiny monkeys.

ADDAMS FAMILY VALUES (1993) 5:55 p.m. on Freeform. An animated adaptation of “The Addams Family” was a hit at the box office last weekend, giving a new generation the opportunity to be introduced to the creepy, kooky Addams clan. In the new version, the patriarch and matriarch, Gomez and Morticia, are voiced by Oscar Isaac and Charlize Theron, who had some big shoes to fill: “Animation spares them from having to match the ingenious physical comedy of Raul Julia and Anjelica Huston,” Ben Kenigsberg noted in his review of the new movie for The New York Times. Julia and Huston’s fleshly humor can be seen in “Addams Family Values,” a live-action comedy that sees Gomez and Morticia welcoming a baby boy (“It’s an Addams!”). The film is the second 1990s movie about the mysterious clan by the director Barry Sonnenfeld. “It could be that the making of this sequel was sheer drudgery for all concerned,” Janet Maslin wrote in her review for The New York Times. “But it doesn’t seem likely. There’s simply too much glee on the screen, thanks to a cast and visual conception that were perfect in the first place, and a screenplay by Paul Rudnick that specializes in delightfully arch, subversive humor.” THE ADDAMS FAMILY (1991), the first of Sonnenfeld’s Addams movies, is airing on Freeform directly beforehand, at 3:50 p.m.

GHOSTS OF SUGAR LAND (2019) Stream on Netflix. This documentary picked up a nonfiction short film award at this year’s Sundance Film Festival. Shot in suburban Texas and directed by Bassam Tariq (“These Birds Walk”), the film is built around interviews with a group of men whose boyhood friend is suspected of joining ISIS — a possibility they debate as they discuss growing up with him as well as their experiences growing up Muslim in post-9/11 America.

VIOLA VISIONS FESTIVAL Stream on Medici.tv. The New World Symphony in Miami Beach is hosting a five-day festival centered on the viola this week, with events set to be live-streamed through Saturday. Tonight, several big-name violists will be conducted by Michael Tilson Thomas, in a program that places Bach’s sixth “Brandenburg” Concerto alongside contemporary pieces by Nils Bultmann, Garth Knox and Andrew Norman. Other highlights from the festival include a concert Thursday night at which Nico Muhly will conduct his own “Keep in Touch,” with the violist Nadia Sirota.

Gabe Cohn writes about television, fine art, film and other topics related to culture and the arts. He joined The Times in 2017.