Jibade-Khalil Huffman started off as a poet and he uses images in his video installations as a sort of grammar, composing phrases, sentences and paragraphs with found or filmed footage. Rather than being watched as a single video or viewed on one or two screens, “Tempo,” a 45-minute work, is dispersed over nine screens mounted on the wall or placed on the gallery floor, and sampled, spliced or composed sound comes at you from above rather than from any one source.

This sense of disruption and disorientation suits the overriding subject here, which relates to black bodies and their historic — and continued — vulnerability in the United States. Richard Pryor, in a sampled snippet, talks about a shooting; young black actors enact silent vignettes in cars and on the streets of Los Angeles; the 1970s sitcom actress Esther Rolle performs an anguished solo in a kitchen, wearing a maid’s uniform (a repeated role for which she was best known). Little actual violence occurs in “Tempo,” but when a young black man who seems to be a doppelgänger or alter ego of the artist stands on a darkened street with police lights flashing … you get the idea.

Elsewhere there is music and joy and ownership. “Black Music Is American Music” says a T-shirt worn by def.sound, one of the musicians who composed the audio for the piece, filmed in a Los Angeles studio. Images of the singer Taylor Swift and a rap commercial for the cereal Fruity Pebbles, as well as various memes, attest to both the popularity and appropriation of black culture and its appearance in unlikely contexts. “Tempo” gently and somewhat abstractly points out the struggle and oppression that have driven and accompanied black music, comedy and performance, even prompting them to flourish, but at a heavy cost. MARTHA SCHWENDENER 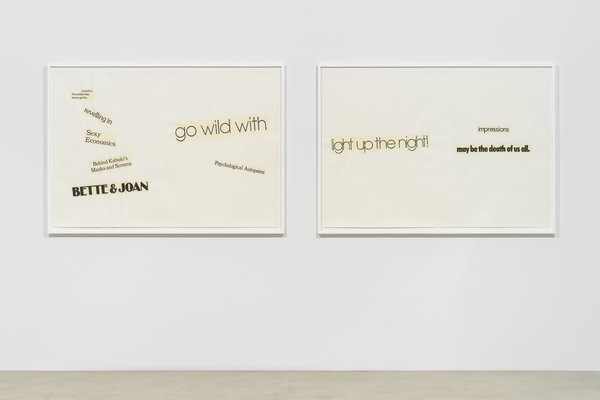 In June 1977, Lorraine O’Grady began cutting up The New York Times Magazine. Every week for six months, she removed words from the newspaper and arranged them into a multipanel collage poem. The resulting series, “Cutting Out The New York Times (CONYT),” was formative: She has said that she began it “as a writer but ended it as more of a visual artist.”

Still, Ms. O’Grady — who, before becoming an artist, attended the Iowa Writers’ Workshop and then worked as an intelligence analyst and a rock music critic — was never entirely satisfied with the work, and 40 years later she revisited it. For a new series, “Cutting Out CONYT” — selections of which are on view at Alexander Gray Associates — she repeated the process of creating poetry from found text; this time, however, she mined both the public language of The Times and her own previous, private reckoning with it. One poem feels almost uncannily self-referential: “The modern artist,/finding himself with/no shared/foundation, has/begun to build on/Reckless Storytelling/STAR WORDS”/“and/The Deluxe Almost-Everything-Included/WORK OF ART.”

Notably, these works are not visually deluxe; they’re spare diptychs that recall open books. White space can be a luxury, yet Ms. O’Grady makes full use of it even as the words within hold their ground. She skillfully wields the matter-of-fact language of newspapers, freeing it from specificity and opening it up to new interpretations that we must forge ourselves. Her clever and evocative assemblages of phrases seem only to dance toward and away from meaning. They are, to borrow one of her lines, “The Best of All Gifts: Common Things That Move the Imagination/A FEELING AS WELL AS A LOOK.” JILLIAN STEINHAUER

“Nona Faustine: Ye Are My Witness” White and black find new symbolic and historical meaning in Nona Faustine’s work. The show takes its title from a 19th-century Brooklyn slave owner’s diary and continues Ms. Faustine’s project of photographing herself nude, wearing white pumps, in sites throughout New York City linked to its slave history. White portrait busts of Thomas Jefferson and George Washington, altered with nails and soil, remind us that Jefferson owned and employed slaves in his blacksmith shop, while Washington’s enslaved labor tilled his tobacco plantation. MARTHA SCHWENDENER 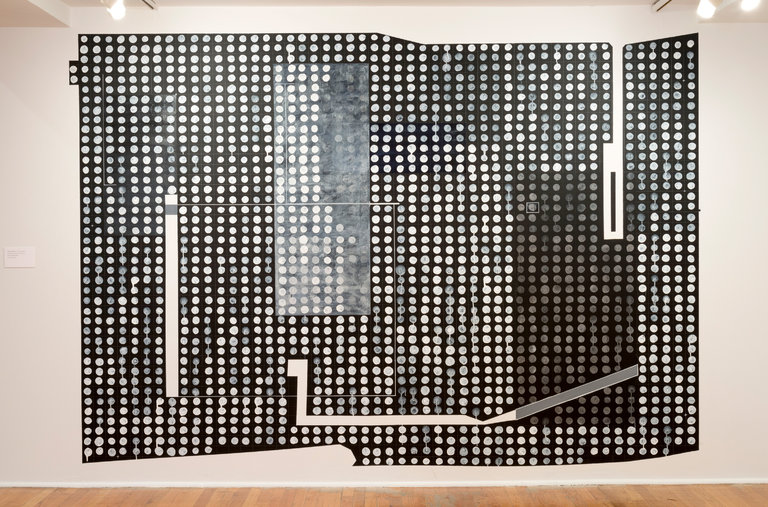 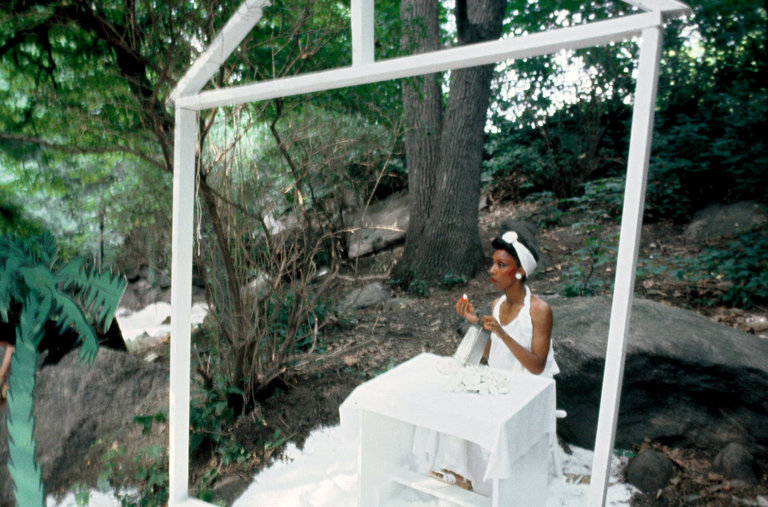