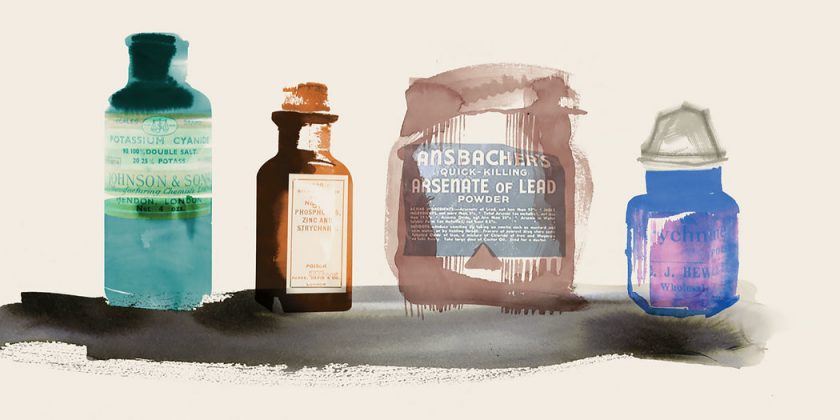 THE GREEN TEA was poured from a porcelain pot in a wood-paneled piano bar at the Millennium Hotel in London. It had been laced with lemon, honey and a radioactive isotope of polonium, a highly unstable element first identified in 1898 by the chemist Marie Curie. She named polonium after her homeland, Poland, which at the time did not exist as a nation-state, its territory having been parsed out and claimed by Russia, the Kingdom of Prussia and the Austro-Hungarian Empire. The name was an intentionally political act, as was the isotope’s appearance in that poisoned cup more than a century later, in 2006, presented by a former K.G.B. agent to Alexander Litvinenko, a Russian dissident and defector, who drank it and died.

As long as there have been power structures and people teetering at the top of them, there have been assassinations. Those most at risk surround themselves with bodyguards trained in Krav Maga and Secret Service agents armed with Sig Sauer P229 pistols. But poison is trickier to defend against, an invisible enemy: The best ones are colorless, odorless, tasteless and traceless, vanishing into food or drink without any sign of contamination. From the dawn of the Persian Achaemenid Empire in the sixth century B.C. to the sustained hold of Vladimir Putin over the Russian Federation today, it has long been believed that the only way to detect the presence of poison is to make someone of lesser importance take the first bite or sip, then wait and see if they survive.

In ancient Persia, a cupbearer would sip the wine — from a spoon so that his lips never touched the cup — before offering it to the king. The Macedonians appointed edeatroi (tasters), who were also responsible for supervising seating arrangements at formal banquets. This was not a lowly, thankless position but a mark of honor: At one point, Alexander the Great’s edeatros was Ptolemy, the trusted general who would eventually seize control of Egypt after his superior’s death. The Romans, both republican and imperial, had praegustatores (literally, foretasters) drawn from slaves and freedmen, for whom the role could lead to higher rank. Halotus, a eunuch who tasted food for the emperor Claudius in the first century A.D., wound up a rich procurator, a provincial official.

Note, however, that Alexander died at 32, having fallen violently ill after a drunken night; some historians argue that there was poison in his wine, which somehow got past the edeatros. And Claudius died on Halotus’s watch, supposedly from eating Amanita phalloides, otherwise known as the death-cap mushroom, slipped onto his plate on the orders of his wife, Agrippina. His son Britannicus was dispatched shortly afterward, at 13, with the praegustator cleverly circumvented: According to the historic record in the “Annals of Tacitus,” “A drink, still harmless, very hot, and already tasted, was handed to Britannicus; then, when he declined it as too warm, cold water was poured in, and with it the poison” — likely of plant origin. The system failed.

Nonetheless, poison has come back in vogue in the shadow world of espionage — a privileging of subterfuge over brute force in keeping with the insidious expansion of warfare to the virtual world, lending everything the sheen of falsehood and conspiracy. Our ways of murder, state-sponsored or not, may have become more sophisticated with each technological advance, and yet poison, elegant, arcane and deadly, endures. In 2011, the Chinese timber tycoon Long Liyuan went into cardiac arrest after eating a hot pot whose ingredients included cat meat and Gelsemium elegans, or heartbreak grass, a flowering plant native to China and Southeast Asia with toxic alkaloids (kin to strychnine) that trigger respiratory failure. (A government official reportedly confessed to the crime.) A year later, remains of the same plant were found in the stomach of the deceased Alexander Perepilichny, a Russian financier in London who collapsed suddenly while cooperating with Western investigators looking into a multimillion-dollar fraud case. In each instance, the weapon was nothing more than a crumble of leaves. 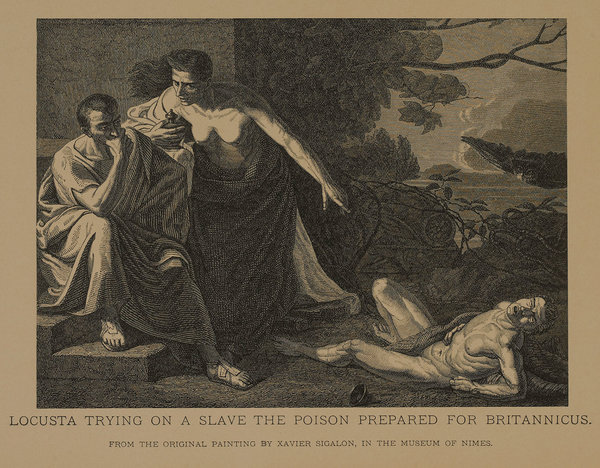 IN TRUTH, no taster can guarantee a leader’s survival. Poisons are unpredictable, their outcomes depending on the victim’s size, age, gender, metabolism and organ health. Arsenic might take effect in two hours or four days; occasionally, its symptoms are as mild as a stomach bug. In high doses, strychnine, the poison of choice in Agatha Christie’s 1920 debut, “The Mysterious Affair at Styles,” can induce spasms and respiratory failure within 15 minutes of ingestion, but a smaller amount may start manifesting later and still prove as fatal. Only cyanide, with its trailing scent of bitter almonds, acts quickly, capable of causing death within a few minutes — thus its purported popularity in pill form among World War II spies, in case of capture.

So the hiring of food tasters is best understood as a cosmetic gesture. Often they’re part of a protective entourage, a cohort whose primary goal is less to shield the figure at the center than to threaten and unsettle others. Putin is said to rarely touch food at banquets outside of Russia. Nicolae Ceausescu, the general secretary of the Romanian Communist Party from 1965 to 1989, brought his own taster to an event at Buckingham Palace in 1978. (The queen was not amused.) Sometimes tasters are simply a means of “quality control,” as Gyaltsen Phensok, who cooked for the Dalai Lama in the late 1950s, put it; he recalled a taster once advising him that the yogurt was too sour, so he put sugar into it. American presidents are followed around the world by Navy mess specialists — cooks, essentially — who monitor their food, with one going so far as to check whether mushrooms served to George W. Bush had been sautéed in wine, because the specialist thought (incorrectly) that the president abstained from alcohol even in food.

But a taster isn’t just a bodyguard, taking a bullet with each bite. There’s an intimacy to the act of sharing food. Vetting someone’s meal by putting it in your own mouth is perhaps not so different from animal mothers chewing their offspring’s food, breaking it down so it’s safe to eat — a technique called kiss feeding, which some scientists think might have been an evolutionary precursor to romantic kissing. In 1988, Saddam Hussein, then the president of Iraq, sentenced to death his eldest son, Uday, for murdering Saddam’s beloved valet and food taster, Kamel Hana Gegeo. (His affection had limits, however: Uday ended up exiled to Switzerland instead.)

Only the most paranoid — or perhaps the guiltiest — tyrants become truly obsessive about what they eat. In North Korea under Kim Jong-il, every grain of rice was inspected and “only those with perfect form were presented,” his former personal chef noted in a pseudonymously written biography of the Dear Leader, published in Japan in 2003. Sometimes food tasters have become accidental beneficiaries of such precautions: Margot Wölk, coerced into being one of Adolf Hitler’s tasters toward the end of his days in his Wolfsschanze bunker in occupied Poland, was terrified by her mission but also acknowledged that “the food was delicious, only the best vegetables,” while the rest of the Reich was subsisting on rations.

OVER THE YEARS, high-profile figures have tried to find other defenses against poisoning. In Qing dynasty China, emperors wielded silver chopsticks, inspecting their gleam as proof that no poison was present, since it was theorized that toxicity would tarnish the metal. (Eunuchs also tasted the food beforehand, just in case.) In the late 13th century, Pope Boniface VIII kept a stash of knives that were said to be carved from unicorn horn that would sweat if put in contact with poison. Mithridates VI, who ruled Pontus, a Persian satrapy on the Black Sea, during the second and first centuries B.C., survived a poisoning attempt by his mother, Queen Laodice, after his father was poisoned. Rather than live in fear, the king studied toxicology and fine-tuned a daily prophylactic that included tiny doses of poison, with the goal of eventually making himself immune.

Today, food tasting is a dying profession — and no longer in the literal sense. In 2003, to safeguard the food for visiting President George W. Bush, the Thai government deployed mice, whose diminutive size would encourage faster onset of symptoms; the Chinese government did the same at the 2008 Beijing Olympics on behalf of the athletes. Bypassing tasting altogether, the official physician to President Recep Tayyip Erdogan of Turkey announced three years ago that a special laboratory had been built in the new presidential palace expressly to test meals for poison.

However, fewer modern poisons rely on consumption, which makes them even harder to anticipate. In 2017, at Malaysia’s Kuala Lumpur International Airport, two women targeted Kim Jong-nam, the older half brother of Kim Jong-un, the current supreme leader of North Korea, by slapping him on the cheeks with the nerve agent VX; his autopsy suggested that he died within 20 minutes. Novichok, a series of nerve agents secretly developed by the Soviet Union during the Cold War, was used earlier this year in the attempted murder of Sergei V. Skripal, a Russian spy turned double agent for Britain. The chemical was swabbed on the handle of Skripal’s front door in Salisbury, England, which may explain why he survived — he absorbed only a small amount through the skin, albeit enough to leave him (and his 33-year-old daughter) near death for weeks.

These newly engineered poisons represent a horrific frontier in technological innovation. Yet they remain essentially archaic, achieving the same goal as an ancient Roman’s application of crushed belladonna. They’re also administered in the same ageless spirit, with coldblooded premeditation and stealth, by paranoid oligarchs anxious to consolidate power and to eliminate rivals, enemies or simply those who have displeased them.

Erdogan’s laboratory in Turkey has thus far turned up little more than the residue of pesticides in fruits and vegetables — a reminder that the modern world contains many threats to our existence beyond those sponsored by the state. But what is life without risk? In a 1989 biography of Japan’s wartime emperor, Hirohito, who ascended the Chrysanthemum Throne in Japan in 1926 and renounced his status as a “living god” in 1946, the foreign correspondent Edward Behr wrote of Hirohito’s unfulfilled yearning for fugu (puffer fish). The fish is a treasured national delicacy but was historically forbidden to emperors because its liver is suffused with the poison tetrodotoxin. Before the fish is consumed, that compound is mostly removed by chefs specifically trained and licensed to do so. Not entirely removed, however: A lingering trace is left, to numb the lips — and to remind us that every exquisite taste has its price. 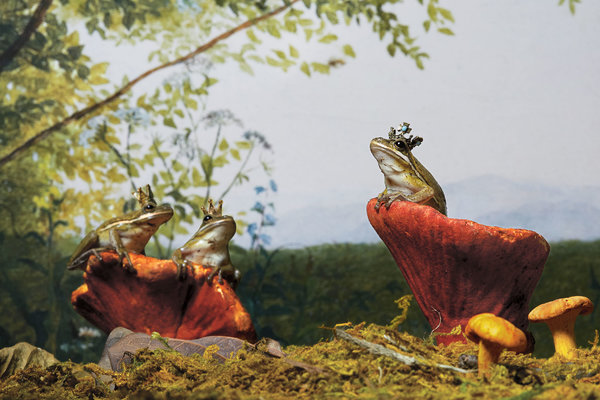 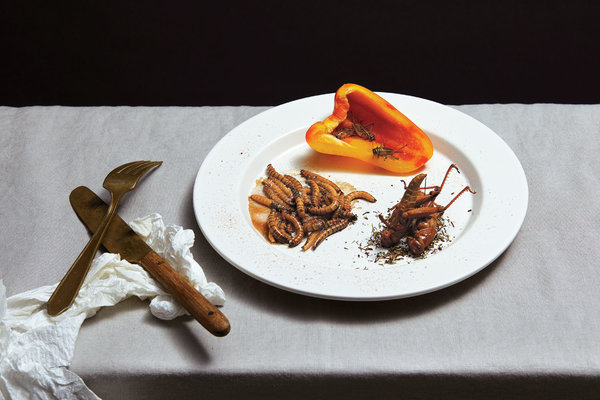