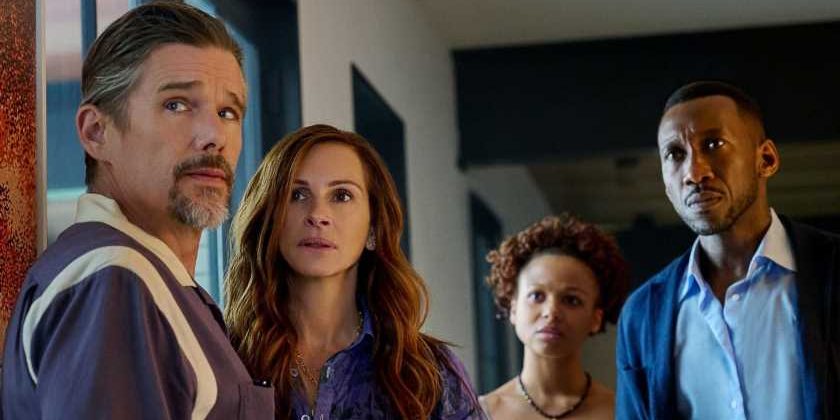 The film adaptation of Rumaan Alam’s bestselling novel will serve as Julia Roberts’ Netflix debut. Here’s everything we know about Leave The World Behind so far.

What would you do if two strangers turned up on the doorstep of your holiday home and told you the world you knew was falling apart? That the city you normally live in had descended into chaos? And that the life you once knew may never be the same again?

That’s the premise behind Rumaan Alam’s bestselling novel Leave The World Behind, which is being adapted into a Netflix film starring none other than Julia Roberts.

The film – which will serve as Roberts’ Netflix debut – isn’t due to hit screens until the start of December this year, but excitement for the thriller is already building after Netflix released an image of Roberts in action alongside her co-stars Mahershala Ali, Myha’la Herrold and Ethan Hawke.

Exploring themes of race, class, power and parenthood, Leave The World Behind is certain to attract a lot of attention upon its release – and we can’t wait to learn more about what audiences can expect. For now, however, here’s everything we know about the upcoming book-to-film adaptation so far.

What is Leave The World Behind about?

Leave The World Behind is a gripping thriller set in Long Island, New York.

Rumaan Alam’s bestselling novel was listed as one of Barack Obama’s Summer Favourites in 2021, and it’s not hard to see why. Set in New York, the book begins by following a couple called Amanda and Clay and their two kids Archie and Rose as they set off on holiday to a rental home in a remote corner of Long Island.

The magic of their city escape is broken, however, when they’re greeted by a late-night knock at the door. Outside are stood Ruth and G.H. – an older couple who say they own the rental home the family are staying in and came there seeking shelter after a power outage swept New York City.

With TV, internet and phone services down, the pair of families are left to navigate the strange new world they find themselves in. What has happened? Are they safe in Long Island? And are the people they’re living with really who they say they are?

Thrillers on Netflix: 21 epic thriller films guaranteed to get your pulse racing

Described as an “impossibly compelling literary thriller about the world we live in now,” Alam taps into issues of parenthood, race and class as he explores the unique situation the families find themselves in.

Indeed, as the book’s synopsis reads: “Leave the World Behind explores how our closest bonds are reshaped in moments of crisis – and how the most terrifying situations are never far from reality.”

Who stars in Leave The World Behind?

The iconic Julia Roberts will star as Amanda in the Netflix adaptation of Alam’s novel, while Ethan Hawke (Boyhood) will play her husband, Clay.

Ruth and G.H. – the couple who turn up on the doorstep of Amanda and Clay’s holiday home – will be played by Myha’la Herrold (Industry) and Mahershala Ali (Moonlight) respectively.

Other actors starring in Leave The World Behind include Charlie Evans and Farrah Mackenzie, who will play Clay and Amanda’s children Archie and Rose.

Kevin Bacon will also make an appearance as Danny, G.H.’s contractor who lives close to the holiday home the families are sheltering in.

The film is also being written and directed by Sam Esmail, who worked with Roberts’ on Amazon Prime’s Homecoming back in 2018.

Is there a trailer for Leave The World Behind?

We don’t yet have a full-length trailer for Netflix’s Leave The World Behind, but we did get a glimpse of the movie in the platform’s 2023 films teaser trailer. You can check it out below:

When and where will Leave The World Behind be released?

Leave The World Behind will be landing on Netflix on 8 December 2023, so make sure to mark the date in your calendar.

We’ll keep this space updated with the latest news about Leave The World Behind as and when we get it, so stay tuned.