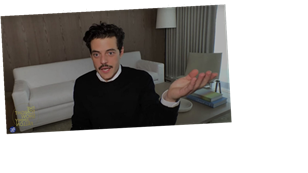 Anyone else thirst after Rami Malek as Ahkmenrah in Night at the Museum? Well, during his Jan. 27 appearance on The Tonight Show, he revealed that we almost missed out on his take on the Egyptian pharaoh. “I was going for it,” Malek recalled to Jimmy Fallon. “This guy was supposed to be in a sarcophagus at Cambridge University, and I popped out of that coffin and I played it like a British dandy. And the studio was like, ‘Nuh-uh.'”

While Ben Stiller seemed to like Malek’s version, the studio was so horrified that it put out another casting call for the role. “The only reason I got back and had to reaudition was because Stiller said, ‘Nah. I think you guys are making a mistake here,'” Malek revealed. However, Stiller wasn’t the only costar Malek shared a special moment with. During filming for Night at the Museum: Secret of the Tomb, which took place partly at the British Museum, Malek got to bask in the majesty that was Robin Williams. You can listen to the rest of his Night at the Museum anecdotes, along with what poignant moment he shared with Williams, in the full video above.