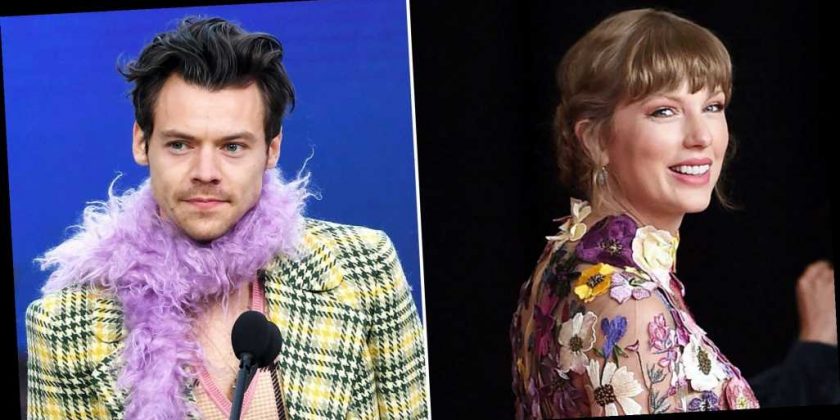 Blast from the past. Taylor Swift felt a bit of déjà vu when her ex-boyfriend Harry Styles won a Grammy for Best Pop Solo Performance during the 63rd annual ceremony.

See What the Stars Wore on the 2021 Grammys Red Carpet

As the former One Direction member, 27, accepted the award for “Watermelon Sugar” during the Sunday, March 14, show, Swift, 31, stood and clapped for him. The “Blank Space” singer nodded her head and seemed to be smiling behind her floral mask, which matched her minidress.

The Pennsylvania native was nominated for the same award for “Cardigan.” She and the X Factor alum also both performed during the 2021 Grammys, with another of her exes, John Mayer, hitting the stage with Maren Morris as well.

The “Gravity” crooner seemingly addressed his romance with Swift earlier this month after fans called him out when he joined TikTok. “You’re not safe here john,” one person wrote on March 1, while another referenced the lyrics of the Cats star’s 2010 song “Dear John” with the comment, “John don’t you think 19 was too young?”

Everything You Need to Know About the 2021 Grammys

Mayer appeared to react to the retorts with a TikTok video of himself mumbling and nodding his head while pretending to be lectured. “POV: You’re berating me and I’m hearing you out,” he captioned the post.

He then shared a follow-up video after receiving more criticism. “That was a weird day / That, that was a real weird day,” he sang in the video, adding in his caption, “Goodnight new friends!”

Styles, meanwhile, has moved on with girlfriend Olivia Wilde, although he previously spoke out about his relationship with Swift — specifically their December 2012 date in Central Park.

“When I see photos from that day, I think: Relationships are hard, at any age. And adding in that you don’t really understand exactly how it works when you’re 18, trying to navigate all that stuff didn’t make it easier,” he told Rolling Stone in April 2017. “I mean, you’re a little bit awkward to begin with. You’re on a date with someone you really like. It should be that simple, right? It was a learning experience for sure. But at the heart of it — I just wanted it to be a normal date.”

Styles then acknowledged that he did not know if Swift’s hits “Style” and “Out of the Woods” were about him. “Certain things don’t work out. There’s a lot of things that can be right, and it’s still wrong. In writing songs about stuff like that, I like tipping a hat to the time together,” he said. “You’re celebrating the fact it was powerful and made you feel something, rather than ‘this didn’t work out, and that’s bad.’ And if you run into that person, maybe it’s awkward, maybe you have to get drunk … but you shared something. Meeting someone new, sharing those experiences, it’s the best s—t ever. So thank you.”

Mayer was not as understanding toward the “Betty” songstress when fans assumed “Dear John” was about him, telling Rolling Stone in June 2012 that he “didn’t deserve” to be referenced in a song.

“It was a really lousy thing to do,” he said. “I never got an email. I never got a phone call. I was really caught off-guard. … I will say as a songwriter that I think it’s kind of cheap songwriting. It’s abusing your talent to rub your hands together and go, ‘Wait ‘til he gets a load of this!’ That’s bulls—t.”