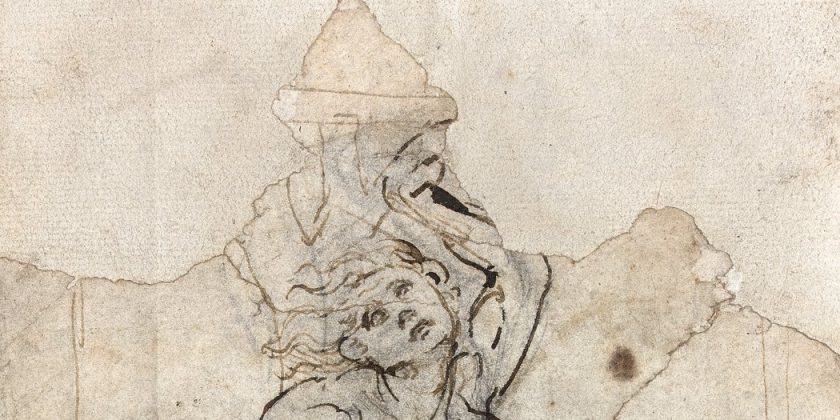 The Paris auction house Tajan will offer a rediscovered drawing by Leonardo da Vinci at public sale on June 19, for the first time, testing the market for a work by the Renaissance master after the extraordinary sale of “Salvator Mundi” last year. The sale will come almost 500 years after da Vinci died, in May 1519, at Amboise, France.

Tajan is hoping to achieve a price between 30 million euros and 60 million for the 1492 drawing, or about $34 million to $68 million, said Rodica Seward, chairman of the auction house.

The double-sided artwork was rediscovered in March 2016 in a private French collection by Thaddée Prate, an old master specialist at Tajan. One side features a vigorous pen and ink drawing of Saint Sebastian tied to a tree, the other inscribed scientific studies of candle light, also in pen and ink.

“The attribution of the St. Sebastian drawing to Leonardo is absolutely solid,” said Carmen Bambach, curator of prints and drawings at the Metropolitan Museum of Art in New York, in an email. “The inscription fits perfectly well with his manuscripts and style of handwriting, and the drawing of the saint is complementary to other drawings of the subject that are already known,” added Ms. Bambach, who is writing a scholarly article on the studies.

In 2016, Tajan valued the discovery at 15 million euros, or about $15.8 million, reflecting what was then the high of $11.5 million achieved for a Leonardo drawing in 2010, according to the Artnet price database.

But in November 2017 values for Leonardo’s works had to be completely reassessed, following the extraordinary $450.3 million bid at Christie’s for a much-restored panel painting of “Salvator Mundi” cataloged as a long-lost Leonardo. The price, paid by the Saudi royal family on behalf of the Louvre Abu Dhabi, was a high for any work of art ever offered at auction.

“It excited interest and raised expectations,” said Ms. Seward. She added that after the “Salvator Mundi” sale “two or three” potential foreign buyers contacted the auction house, suggesting they were willing to pay more than 15 million euros for the Leonardo drawing.

Ms. Seward said the drawing had been certified as a “national treasure,” prohibiting its export for 30 months, during which time the French state could purchase the drawing at the international market price. But how can the price of a rare Leonardo work be accurately determined in the aftermath of the $450 million “Salvator Mundi?”

After consulting with her client and Jean-Luc Martinez, director of the Louvre, Ms. Seward said that Tajan had decided to offer the drawing at public auction to determine its “real market value.”

Once the hammer has fallen, if a major French museum such as the Louvre doesn’t step in, the drawing could be exported at the end of June, when the 30-month “national treasure” certification ends, Ms. Seward added. Neither the Louvre, nor France’s Ministry of Culture responded to requests for comment.

Beginning Oct. 24, through Feb. 24, the Louvre will be holding what it calls “an unprecedented exhibition” dedicated to Leonardo da Vinci on the 500th anniversary of his death.