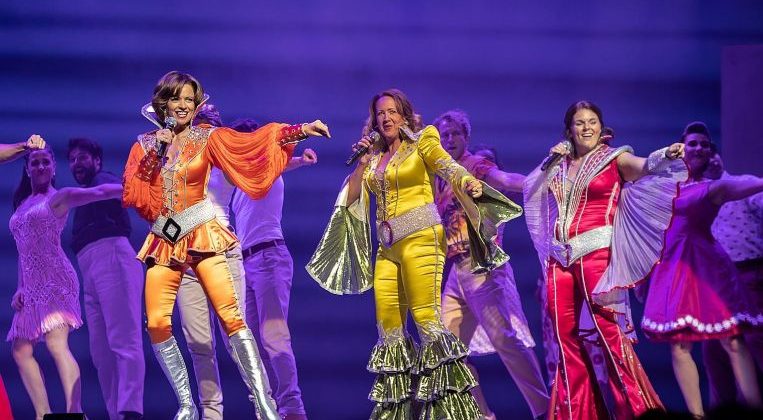 A convincing storyline was never really the point of Mamma Mia!, which has been a smash hit since it premiered in London’s West End in 1999. What it does, when done well, is relive the magic of Abba’s music in a story told through some of the Swedish pop group’s most iconic songs.

Wednesday’s performance had plenty of toe-tappingly decent renditions of familiar tunes by Benny Andersson and Bjorn Ulvaeus (with Abba, how bad could it possibly get), but unfortunately it did not quite live up to its promise.

Mamma Mia!, back in Singapore after a run in 2014, was originally produced by Judy Craymer, directed by Phyllida Lloyd, and written by Catherine Johnson.

The story, set on a fictional Greek island, begins with Sophie, a 20-year-old woman who is about to get married. She invites her mother’s three ex-lovers to her wedding, hoping to find out which of them is her father.

Abba’s songs are notoriously hard to pull off, and it is hard to hear them performed today without missing the haunting harmonies of Agnetha Faltskog and Anni-Frid Lyngstad.

While no one was expecting Wednesday night’s show to be perfect, there was enough in it to grate on the viewer: uneven pacing, the occasional missed cue, and a disappointing performance of Lay All Your Love On Me by United Kingdom actors Phillip Ryan and Lucy May Barker, who play the engaged couple.

The harmonies for Super Trouper were too loud and high-octane disco numbers such as Voulez-Vous made the sound system blare at a volume that felt uncomfortable to listen to – at least from where I was seated seven rows from the stage.

Still, there were some fine moments. The musical’s star, Shona White, who plays Sophie’s mother Donna, managed to hold her own in The Winner Takes It All, even though she was clearly more comfortable with a lower register.

One of the more enjoyable numbers was Does Your Mother Know, an energetic piece featuring thrice-divorced femme fatale Tanya (Anker) and a Greek youth who has a crush on her.

The latter’s slick dance moves had me longing for more ingenious choreography elsewhere in the musical. Take A Chance On Me, filled with plenty of physical hilarity between Swift and Rutherford’s characters, was another song I didn’t want to end.

There is a melancholic strain in much of Abba’s later music, a sense of smiling through tears, which might feel appropriate in a glittery extravaganza – “facing twenty thousand of your friends/ how can anyone be so lonely,” sings Lyngstad in Super Trouper – but does not translate so well into a comedy set on a sunny Greek island.

Maybe that is why the light-hearted numbers seemed more convincing than the desperately sad S.O.S. and Knowing Me, Knowing You, which both had an emotional potential that was not fully realised.

In the finale, Donna and her friends wear Abba-inspired disco trousers as they belt out a final medley of songs. The lights swerve to the audience, our cue to get up and dance.

On Wednesday night, no one did. Maybe it is a Singaporean thing. Maybe we were just not feeling it.

My left ear was still hurting when my companion and I finally slinked off into the rainy evening, wishing we were somewhere else instead.