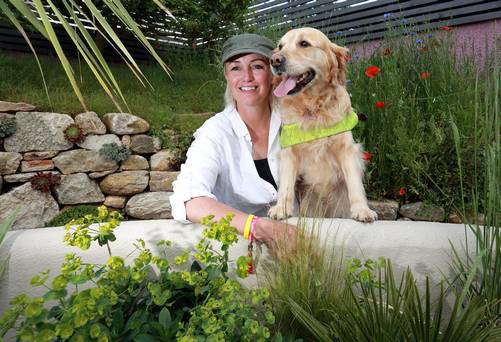 Clothing designer Grainne Walsh created a canine-centric doggy paradise at Bloom, inspired by her own rescue dogs and a recent visit to Marrakesh.

Crowds of people have thronged her garden throughout the festival in the Phoenix Park, as blazing morning sunshine beat down.

With a tunnel under the rockery, posts for games, a dog bunk bed and even a plunge pool, this was the winning entry to RTÉ’s Super Garden.

And although it is called ‘The Under Dog’s Garden’, it was anything but – as assistance dog Farah showed. Farah’s owner, Kayla Harten (11) from Bray, Co Wicklow, has Rett Syndrome, a rare genetic brain disorder, and Farah is a vital aide in helping her to walk, said Kayla’s father Emmett.

Kayla is now developing epilepsy, and since part of her dog’s training involved learning to “speak” when observing the warning signs of a seizure, that is now also part of her job. Farah came from Irish Dogs for the Disabled and was trained in basic skills for one month by the prisoners at Shelton Abbey in Wicklow, Mr Harten said, before going on for further training.

Now seven, she will be retiring this year.

“We’re keeping her and it’s great – she will help us to train the new dog – our work will be halved,” laughed Mr Harten.

His company Kayla’s Kitchen supplied healthy food to Grainne and her helpers during the building of the garden. But while building a garden is one thing, what happens to it afterwards is another.

The designer admitted she was worried that she does not yet have a home for her garden, which has to be dismantled and taken away from the site tomorrow.

“A dog charity would be great,” she said in terms of who or what might benefit the most from the garden.

The thousands who visited Bloom over the weekend to view the gardens on show have enjoyed mostly dry and sunny weather. While it was blustery at times, similar conditions are set to stay in place for the final day of the festival and bank holiday weekend.

Temperatures will hit highs of 16C although Dublin won’t be immune to scattered showers sweeping across the country – so don’t forget the umbrella.

Among the crowds who were yesterday soaking up the sun and enjoying the atmosphere was Dublin’s poll-topping Green MEP Ciarán Cuffe.

He was touring the Enable Ireland Diversity Garden with Gary Graham, creator of Bloom.

“It’s an amazing show this year with so many important themes,” Mr Cuffe said, adding the beautiful gardens went side by side with serious issues like biodiversity and the problem of plastics in our seas.

He also had a curious look at the electricity-generating toilet in the E3 garden designed by Trinity College students, quipping he had managed to avoid a photo.

Eager to get stuck into his new role, he has already taken a trip to Brussels during the week and met with some of the other MEPS to look at configuration and building blocs.

“I hope Grace O’Sullivan will be joining me soon,” he said in reference to his Green Party colleague, still mired in the Ireland South recount.

And while there was plenty of fuss surrounding the gardens, the food village was equally exciting.

At the Wild About stand, there were samples of intriguing products like delicious nettle syrup, raspberry and chilli chutney and fennel cider butter, as well as ‘marrowmalade’ – a popular war-time recipe.

“I had an 80-year-old woman who bought a box of it because she said she hadn’t tasted it in 50 years,” said Fiona Falconer, a former documentary film maker, who set up the “tiny” company with her husband Malcolm, a product design engineer.

The couple moved home from London seven years ago and took over a five-acre farm at Monamolin, Co Wexford, on which they grow most of the produce they need.

“I didn’t have muck under my nails until I was in my 40s – I went to Loreto, Stephen’s Green,” laughed Ms Falconer, saying she wants people to think about where their food is coming from and how it is grown.