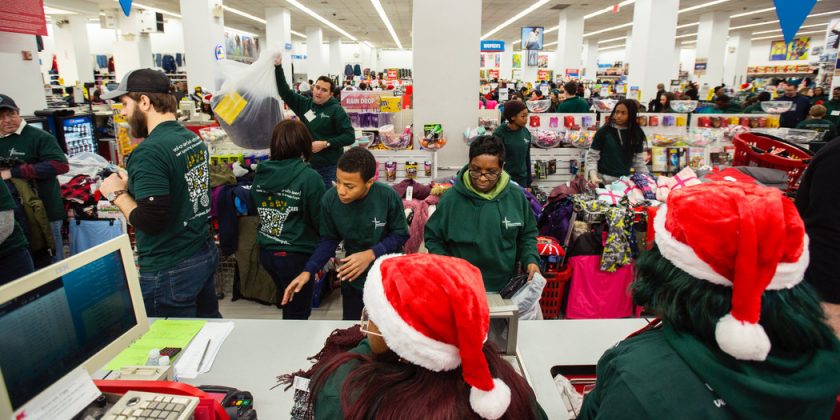 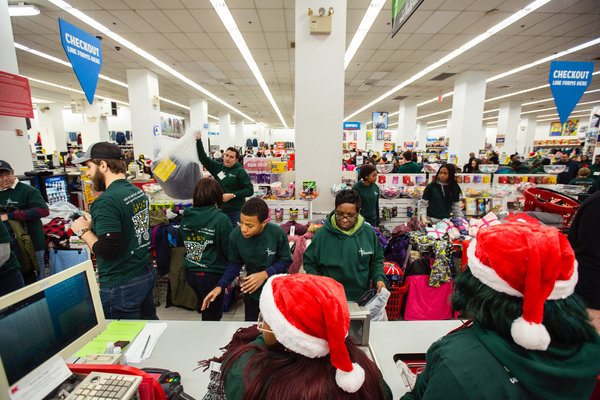 The line at Kmart snaked around the store, jamming traffic across the aisles, as shoppers piled carts with coats, scarves, pajamas and sweaters.

“Everyone is looking for those deals but shopping for someone else,” said Grace Talley, 17, while standing over a full cart. “It’s like a more wholesome Black Friday.”

Grace and her friends were participating in Catholic Charities Archdiocese of New York’s annual St. Nicholas Project Shopping Day. On Dec. 8, about 400 volunteers came to the Astor Place Kmart in Manhattan with shopping lists for 1,200 people who might otherwise miss out on Christmas gifts.

All items are purchased with previously donated funds to Catholic Charities. Volunteers are given a profile of a family to shop for that includes gender, age and a maximum budget they can spend.

“Especially in New York City, the holiday season is forced upon you, so for a family who might not be able to afford Christmas for their kids or themselves, it’s really nice to know that they’re going to be getting something for the holiday season no matter what,” Grace said.

Each list had a budget and list of family members’ ages, sizes and genders. Every recipient gets a new coat.

For the fourth time, Jenny Richards was volunteering for the event.

“It’s very good that people can come out and volunteer to do it, because you never know when you’re going to find yourself in one of these situations,” she said. “You don’t know when it’s going to be your turn.”

Downstairs in the children’s department, Adrienne Curry was shopping in her third St. Nicholas Day event for a family with eight children. She had already tackled a separate list with seven children. Her shopping cart was so full, it kept catching on clothes racks as she made her way from aisle to aisle. She calls herself a professional Catholic Charities volunteer.

“You have to be judicious,” she said of her shopping approach. But at the end of the day, “People need a warm coat.”

The gift-buying was one of a handful of December events held this year by agencies supported by The New York Times Neediest Cases Fund. They are intended to make the holidays of families in need a little brighter and create a connection between giver and recipient.

“You have to think about what you would like, too,” said James Max West, 14.

Where Toys Are the Price of Admission

Imagining the personality and quirks of the child destined to receive a gift is also a theme of the annual toy drive benefiting Catholic Charities Brooklyn and Queens. It has taken place on the second Saturday of December for 36 years, thanks to Don Costello, a retired lieutenant commander with the New York Police Department.

His inspiration came in 1982 after he responded to a home robbery shortly before Christmas. All of the gifts that a father had bought for his children had been stolen.

“I felt so bad for the guy,” recalled Mr. Costello. He felt compelled to contact a charity run by Catholic Charities Brooklyn and Queens in hopes of replenishing the gifts. But the charity had only clothing, prompting Mr. Costello to buy a slew of toys for the man.

Wanting to do more, Mr. Costello began spearheading a toy drive of his own, transforming a holiday party he throws every year into a more philanthropic event, with Catholic Charities as the beneficiary. He rents a hall to serve as a party space; the cost of admission is a toy or a game to be donated. The toys collected on Dec. 8 this year were distributed at a Brooklyn parish on Wednesday and at a church in Astoria on Thursday.

“This can make a kid’s Christmas no matter what,” said Mr. Costello, 66. After leading the project for more decades, he said he needs the dozen or so volunteers who make the event possible now more than ever. “We have to keep going,” he said.

The toy collection event this year was held at Our Lady of Lourdes in Queens Village; the basement auditorium can hold the 400 to 500 attendees. Budweiser donated beer, as it has done for more than 15 years. Some people donate money to Catholic Charities to help offset costs, and restaurants and business offer raffle prizes.

“If you can bring a smile to a kid’s face, that’s the main thing,” Mr. Costello said. “I can’t picture a kid waking up on Christmas Day without a gift.”

Bringing Help to Families in Need

Beaming children were the inspiration for another holiday event held last week at the Children’s Aid Frederick Douglass Community Center, the site of the Garden of Dreams’ Adopt-a-Family holiday gift distribution. The Garden of Dreams Foundation is a nonprofit organization that works to help children facing obstacles.

A total of 168 families received large boxes that contained numerous gifts, with each batch selected by volunteers who went shopping with “wish lists” the families compiled.

Regina Harris was a first-time participant hoping to brighten Christmas for her 5-year-old daughter, who attends an after-school program at Dunlevy Milbank Center in Harlem, part of Children’s Aid.

“We’re just making ends meet,” said Ms. Harris, who is currently unemployed. “It was a real blessing for me and my family.”

She added: “Whatever is given is more than what we’d have.”

This is the second consecutive year that Garden of Dreams has teamed up with Children’s Aid for the Adopt-a-Family endeavor, though their partnership dates to the foundation’s inception in 2006.

John Starks, a retired Knicks player and Garden of Dreams board member, also attended this year.

“This can be a great time of the year, or it can be a bad time of the year,” Mr. Starks said. “It depends on what side of the road you’re on. We’re trying to do our best to bring smiles to a lot of these families.”

Raquia Wilkinson-Khaliq’s family was another of those selected for the Adopt-a-Family program.

One family took the opportunity to ask for essential items. For Mayra Solis, Christmas is an opportunity to secure things needed for the year ahead. Last year, her son put toiletries, including soap, on his wish list.

“For me, it was: ‘Wow, that’s what you want for Christmas,’” Ms. Solis recalled. Generous volunteers provided the requested items, as well as surprises like gift cards to a video game store.

“Now that Mr. Starks is here, can I get a car off the lot?” Ms. Wilkinson-Khaliq joked.