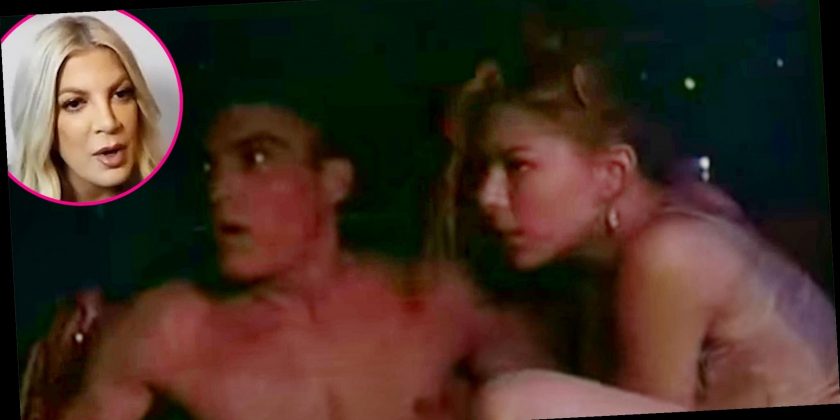 Donna Martin and David Silver’s love story wasn’t perfect — and Tori Spelling doesn’t like to think about Brian Austin Green’s character’s missteps. During a game of Beverly Hills, 90210 trivia with Us Weekly, the actress got visibly upset while answering questions about David cheating on Donna.

“Ugh, in a limo with Ariel,” Spelling, 47, replied when asked who David cheated on Donna with during season 4. “Oh, my God. I just got upset about it, like, it really happened to me, like, I just got all the feels back.”

“Sorry, I got mad again, personally, sorry,” Spelling quipped. She subsequently concluded that revisiting the show for their “9021OMG” podcast, which debuts on Monday, November 9, is going to be “therapeutic.”

Tori and Jennie’s Friendship Over the Years

While David and Donna were on and off during the 10-season run of Beverly Hills, 90210, the onscreen couple exchanged vows during the 2000 series finale — and Spelling thinks they are still going strong.

“I’m gonna go with yes. And they have a gaggle of kids. Oh, that’s my real life,” she told Us. “I mean between the two of us, Brian and I have a lot of kids so yeah, I think Donna and David would have a lot of kids and be happily married.”

“I think maybe she would be on our own by now,” she told Us. “She would definitely choose herself again.”

During the trivia game, the What I Like About You actress, who said she remembers less than “90 percent” of the series, was surprised to learn Brandon was unfaithful to Kelly on the show.

“He wouldn’t do that!” Garth said.

Spelling added, “I just got super protective and now I got furious for you that he did that.”

All jokes aside, Garth and Spelling want to have all of their onscreen boyfriends on their rewatch podcast.

“Jen and I had so many boyfriends on that show over the years. We want to have all our boyfriends on!” Spelling said.

Garth quipped, “It will be a parade of boyfriends in the studio.”

To see Garth and Spelling’s complete trivia game, watch the video above!