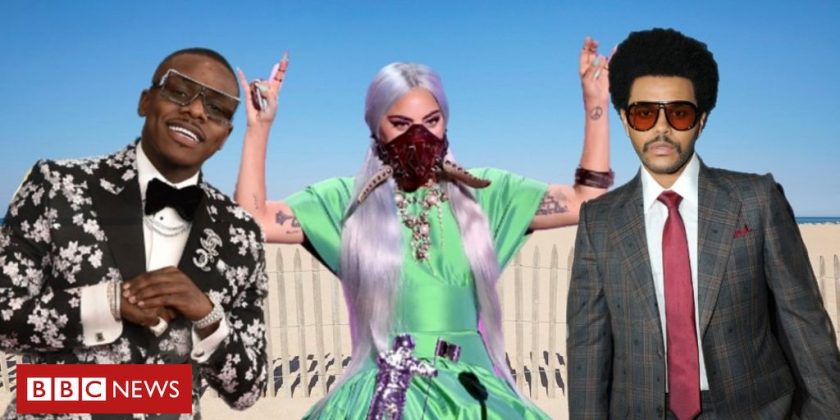 DaBaby’s Rockstar was the UK’s biggest-selling song of the summer, says the Official Charts Company.

Notching up 654,000 combined sales and streams over the summer, the brooding, guitar-driven rap song outsold hits by Lady Gaga and Harry Styles.

It was one of several best-sellers this summer to be boosted by TikTok, where it triggered a viral dance challenge.

Originally an instrumental by New Zealand teenager Joshua Stylah (aka Jawsh 685), it was spotted by Derulo after it took off on TikTok.

The US star added vocals to the track, initially without crediting Stylah or obtaining permission for the sample. After Stylah signed a record deal with Columbia records, the song was released as a collaboration and climbed to the top of the charts.

Savage Love achieved 566,000 chart sales over the summer, closely followed by Lady Gaga and Ariana Grande’s Rain On Me, which had 515,000 sales.

The pop divas were closely followed by The Weeknd, whose hit single Blinding Lights continued to sell over the summer after reaching number one earlier in the year.

An even longer-standing hit was Harry Styles’ mouth-watering Watermelon Sugar, which was the seventh most popular song of the summer, despite making its chart debut last November.

The Official Charts combined sales and downloads with video and audio streams to compile its list.

DaBaby’s Rockstar had previously been named the most-streamed song of the summer by Spotify, while on YouTube, the top performers were Korean pop band Blackpink, whose single How You Like That was played more than 450 million times in June, July and August.

DaBaby, who comes from North Carolina, has proved to be a master of meme-based marketing, achieving early attention by walking around the South by Southwest festival in Texas wearing only jewels and an adult-sized nappy.

Initially, his “internet presence was definitely bigger than the music,” he told the New York Times last year, boasting, “I’m so good at marketing”.

“Once I knew I had them looking, I turned up with the music,” he added. “I knew what I was doing – it was premeditated.”

Rockstar was his first UK hit, propelled by a dance craze focusing on the song’s hook on TikTok.

The platform, which allows users to make 15-second videos set to music, has become an increasingly powerful tool for marketing music.

Fourteen of the UK’s top 20 best-selling songs this summer were popular on TikTok before hitting the charts, boosting the profile of lesser-known artists like Gracey, Powfu and Beabadoobee alongside more established acts such as Drake.

However, while record companies increasingly look to the app to seed new hits, the Chinese-owned firm has been accused of being a threat to US national security by the Trump administration.

TikTok was given 90 days to be sold to an American firm or face a ban in the US, leading to the resignation of chief executive Kevin Mayer.