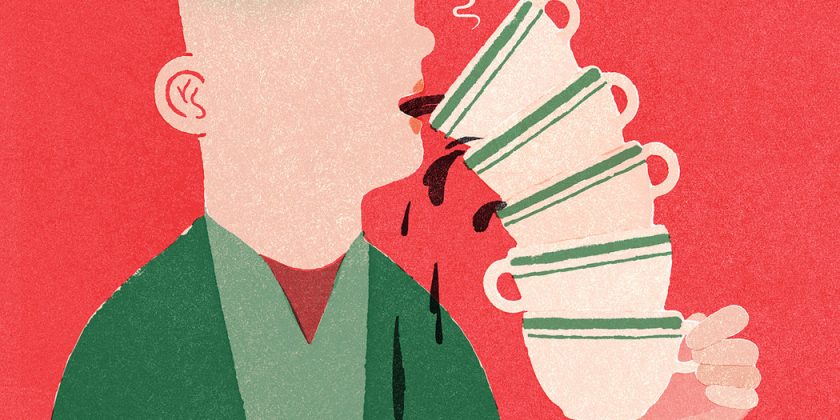 As my brother neared the end of a smooth, swift recovery from open-heart surgery to bypass an 80-percent blockage in his heart’s most important artery recently, he reverted to a longstanding habit of downing many cups a day of strong coffee. I objected, but he insisted that the caffeine doesn’t affect him, meaning it doesn’t disturb his sleep.

But when I noticed how easily he became upset or angered by minor irritations many times a day, I decided to look into what is known about the bodily effects of so much caffeine and whether it might contribute to the harmful effects of stress on the heart.

Caffeine is by far America’s leading nonprescription drug, regularly consumed by some 90 million adults each day in coffee, tea, soft and energy drinks and some prescription and over-the-counter medications.

Don’t misunderstand. I’m not against caffeine. I drink about two and a half cups of caffeinated coffee a day, “watered” down with lots of milk. And I occasionally snack on a few chocolate-covered coffee beans.

In moderate doses caffeine has mainly positive effects for most people. It is a central nervous system stimulant that increases alertness, relieves fatigue and improves concentration and focus. For sports participants, it can enhance endurance. It may even boost weight loss by temporarily suppressing appetite and prompting the body to produce heat and energy when digesting food. Consumed in moderation, coffee has even been linked to a reduced risk of several kinds of cancer.

If not for caffeine, I suspect there’d be a lot more accidents involving drivers who fall asleep at the wheel. I dare not drive long distances without a mug of coffee at my elbow, and often have a cup before going to a concert, opera or play. But I also know not to overdo it lest I become tolerant to caffeine’s stimulating effect and it no longer helps me remain awake when it really counts.

The Food and Drug Administration advises a maximum daily intake of 400 milligrams, the amount in two to three cups of caffeinated coffee, depending on the brand and roast. But what if, like my brother, you are consuming six or more cups of coffee a day? Even if your sleep is not disrupted, that amount of caffeine has been associated with an irregular heartbeat, high blood pressure, jitteriness, irritability and anxiety, all of which can have untoward effects on cardiovascular function.

Caffeine increases secretion of the body’s main stress hormone, cortisol, best known for fueling a fight-or-flight response to a perceived threat or crisis. Produced by the adrenal glands when stimulated by the hypothalamus and pituitary gland, cortisol diverts other bodily functions to permit a quick, effective response to stress or danger.

A sudden jolt from cortisol prompts your blood pressure to rise, heart to beat faster and energy level to soar, which no doubt enabled some early humans to escape a hungry lion in pursuit. Few of us today have to worry about becoming prey to a wild beast. Still, many live in a near-constant state of biochemical stress with the body’s alarm system turned on high all day long.

A constant outpouring of too much cortisol can result in a number of health problems, including anxiety, depression, problems with memory and concentration, trouble sleeping, weight gain and — yes, dear brother — heart disease.

Although the cortisol responses to caffeine are reduced in people who consume it every day, they are not eliminated, a controlled trial by a multidisciplinary research team demonstrated. In a report published in 2005 in Psychosomatic Medicine, the team, led by William R. Lovallo, an expert on stress at the University of Oklahoma Health Sciences Center, the team concluded that “chronic elevations of cortisol secretion may have implications for long-term health.”

Among the possible harmful effects the team listed are impaired responses by the immune system and central nervous system, memory deficits and changes in the workings of the brain’s frontal lobe and limbic system involved in critical factors like problem solving, judgment, motivation, attention, memory, learning, emotions and empathy.

For those at risk of heart disease, perhaps the most serious adverse effect of excessive caffeine consumption is its ability to raise blood pressure. As Dr. Lovallo’s team reported, “daily caffeine intake does not abolish the blood pressure response to caffeine” even in healthy young men and women.

My brother has long been treated for hypertension and is now very conscientious about staying on a low-sodium diet. But maybe it would be even more helpful if he also reduced the amount of caffeine he regularly consumes, replacing some of that caffeinated coffee with decaf, a suggestion he categorically rejected when I offered it.

I’ve since found another cardiovascular reason for my brother and others to consider reducing the amount of cortisol that routinely travels through their bloodstream. A 2012 British study of 466 healthy men and women, average age 62, who had no history or signs of coronary heart disease found that in the 40 percent who reacted to a stressful task with a significant rise in cortisol, calcium deposits in their coronary arteries increased significantly over the course of three years. High calcium levels are associated with more arterial plaque and a greater risk of heart attack.

Even in a sample of healthy young women, researchers have found that a stress-induced rise in blood pressure was associated with a 24 percent increased chance of developing calcium deposits in their coronary arteries 13 years later.

So, as with most other good things in life, with caffeine, moderation is the key to maximizing the benefits while minimizing the risks.