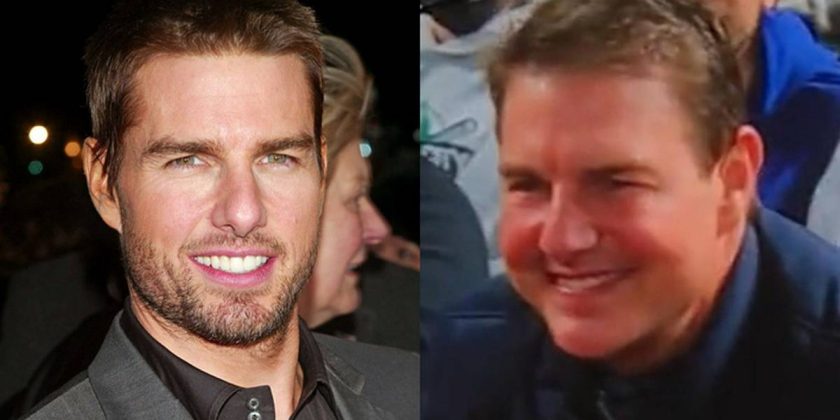 Tom Cruise has had a lot of people talking this week, but he’s just the tip of the iceberg when it comes to celebrities who have changed up their appearance over the years.

Some even compared him to recently deceased comedian Norm Macdonald when the pictures went viral on social media.

“Didn’t realise Tom Cruise had signed on to a Norm Macdonald biopic,” one person tweeted.

“Am I the only one who thinks this isn’t Tom Cruise but just some random dude who looks kind of like him?” another wrote in confusion.

Cruise happily posed for photos with fans and chatted with people in the crowd – and was all smiles when his face showed up on the big screen amid the game. He waved as the song Danger Zone from Top Gun’s soundtrack was played in the stadium.

Here are some other celebrities who have noticeably switched up their looks:

The pop legend, 63, almost appears younger than compared to early in her music career.

The Material Girl looks great in both photos. She seems determined to hold on to her youthful popstar days.

Spelling, best known for her role on 90210, appears to have drawn inspiration from the Kardashians as she has got older.

“Wow Tori doesn’t look like her any more,” a fan recently posted on an Instagram photo of the star.

The 48-year-old has spoken about before about getting a nose job and breast augmentation, but she has denied any further work.

Since rocketing to fame, the Transformers actress has switched up her signature look.

There is not a wrinkle in sight on her forehead, and her lips appear plumper. Fox has denied ever having Botox, cheek augmentations, or any other work done, according to the New York Post.

She had admitted to “deep insecurities” and shared she struggled with body dysmorphia in an interview with her boyfriend Machine Gun Kelly for GQ style.

The rapper is almost unrecognisable today compared to when she rose to fame in the 1990s.

Now 47, the musician suffered a broken nose during a violent altercation with an ex-partner and had to have a surgery as a result.

Since then, she’s shared she has had other treatments on her nose but from 2016 the star made several other changes. She now has paler skin and more plump cheeks.

It’s hard to believe it’s been 15 years since High School Musical made instant stars out its actors. Efron is now 33, and went from boy-next-door cute to buff heartthrob.

His friends have denied he’s had any work done, and it seems like Efron has simply spent more time at the gym over the years.