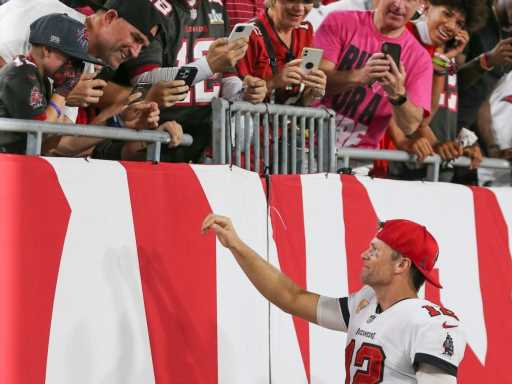 There was a lot for fans of the Tampa Bay Buccaneers to celebrate following last night’s game against the Chicago Bears. The Bucs 38-3 win wasn’t the only extraordinary thing that happened on the field, and those who watched the game have Tom Brady and one young fan to thank for what transpired. With less than two minutes of play, the famed quarterback went over to the stands to a young fan who beat brain cancer and shared a touching moment neither will likely ever forget.

As seconds ticked by on the clock, the father of three took time to have a sweet exchange with the young fan who’d brought a sign that read, “Tom Brady helped me beat brain cancer.” Upon seeing the sign, Brady went over to the little boy and offered him his Bucs hat. Brady put the cap on the fan’s head and the two shook hands before the little boy began crying.

It was undoubtedly an incredibly meaningful moment for the little boy. But even Brady shared in a post-game press conference that the exchange really put a lot of “perspective” on his job as an athlete and what he and his teammates have accomplished. “That was really sweet. Obviously, tough kid, man. Puts a lot in perspective with what we’re doing on the field; in the end it doesn’t mean much compared to what so many go through,” he said, per NFL.com

Along with Brady’s touching moment with the young fan, the quarterback had a major career achievement celebrate on his own. Brady became the first player in NFL history to toss 600 touchdowns, per NFL.com. During the Tampa Bay Buccaneers game alone, Brady threw four touchdowns. It just goes to show whether he’s on or off the field, the football star is definitely making an indelible impact.

Before you go, click here to see our favorite photos of Tom Brady hugging his kids on the football field.