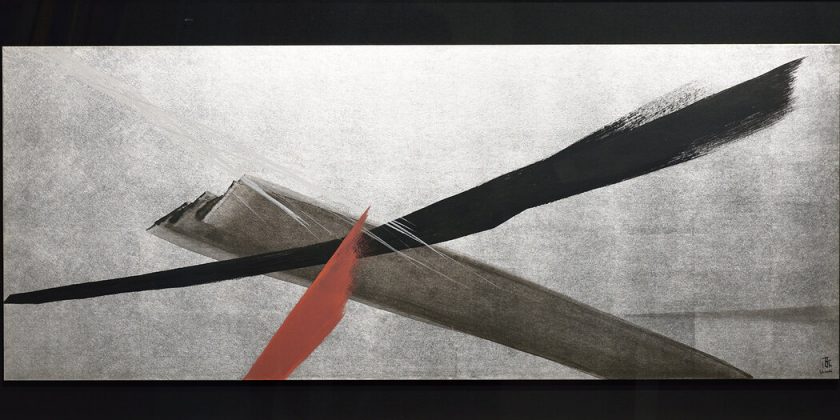 Toko Shinoda, one of the foremost Japanese artists of the 20th century, whose work married the ancient serenity of calligraphy with the modernist urgency of Abstract Expressionism, died on Monday at a hospital in Tokyo. She was 107.

Her death was announced by Allison Tolman, her gallerist in the United States.

A painter and printmaker, Ms. Shinoda attained international renown at midcentury and remained sought after by major museums and galleries worldwide for more than five decades.

Writing about a 1998 exhibition of Ms. Shinoda’s work at a London gallery, the British newspaper The Independent called it “elegant, minimal and very, very composed,” adding, “Her roots as a calligrapher are clear, as are her connections with American art of the 1950s, but she is quite obviously a major artist in her own right.” 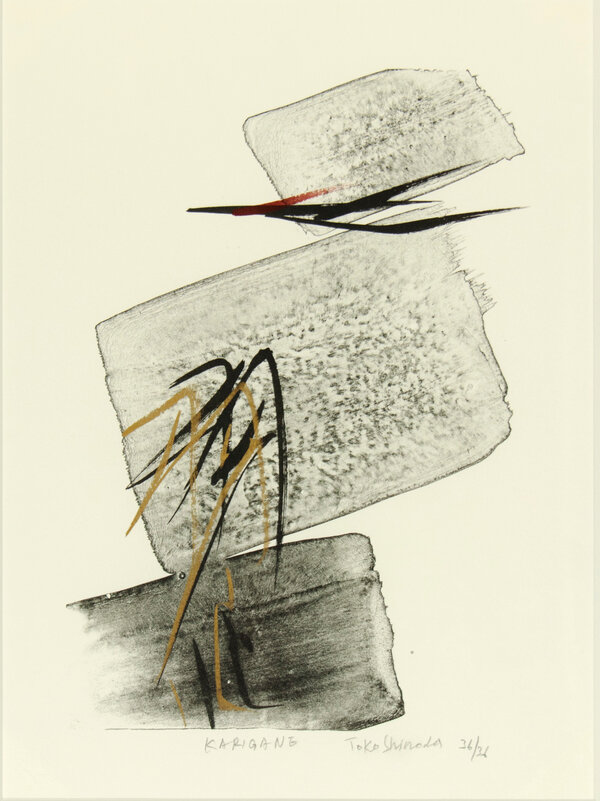 As a painter, Ms. Shinoda worked primarily in sumi ink, a solid form of ink, made from soot pressed into sticks, that has been used in Asia for centuries.

Rubbed on a wet stone to release their pigment, the sticks yield a subtle ink that, because it is quickly imbibed by paper, is strikingly ephemeral. The sumi artist must make each brush stroke with all due deliberation, as the nature of the medium precludes the possibility of reworking even a single line.

“The color of the ink which is produced by this method is a very delicate one,” Ms. Shinoda told The Business Times of Singapore in 2014. “It is thus necessary to finish one’s work very quickly. So the composition must be determined in my mind before I pick up the brush. Then, as they say, the painting just falls off the brush.”

Ms. Shinoda painted almost entirely in gradations of black, with occasional sepias and filmy blues. The ink sticks she used had been made for the great sumi artists of the past, some as long as 500 years ago.

Her line — fluid, elegant, impeccably placed — owed much to calligraphy. She had been rigorously trained in that discipline from the time she was a child, but she had begun to push against its confines when she was still very young.

Deeply influenced by American Abstract Expressionists like Jackson Pollock, Mark Rothko and Robert Motherwell, whose work she encountered when she lived in New York in the late 1950s, Ms. Shinoda shunned representation.

“If I have a definite idea, why paint it?,” she asked in an interview with United Press International in 1980. “It’s already understood and accepted. A stand of bamboo is more beautiful than a painting could be. Mount Fuji is more striking than any possible imitation.”

Spare and quietly powerful, making abundant use of white space, Ms. Shinoda’s paintings are done on traditional Chinese and Japanese papers, or on backgrounds of gold, silver or platinum leaf.

Often asymmetrical, they can overlay a stark geometric shape with the barest calligraphic strokes. The combined effect appears to catch and hold something evanescent — “as elusive as the memory of a pleasant scent or the movement of wind,” as she said in a 1996 interview.

Ms. Shinoda’s work also included lithographs; three-dimensional pieces of wood and other materials; and murals in public spaces, including a series made for the Zojoji Temple in Tokyo.

The fifth of seven children of a prosperous family, Ms. Shinoda was born on March 28, 1913, in Dalian, in Manchuria, where her father managed a tobacco plant. Her mother was a homemaker. The family returned to Japan when she was a baby, settling in Gifu, midway between Kyoto and Tokyo.

One of her father’s uncles, a sculptor and calligrapher, had been an official seal carver to the Meiji emperor. He conveyed his love of art and poetry to Toko’s father, who in turn passed it to Toko.

“My upbringing was a very traditional one, with relatives living with my parents,” she said in the U.P.I. interview. “In a scholarly atmosphere, I grew up knowing I wanted to make these things, to be an artist.”

She began studying calligraphy at 6, learning, hour by hour, impeccable mastery over line. But by the time she was a teenager, she had begun to seek an artistic outlet that she felt calligraphy, with its centuries-old conventions, could not afford.

“I got tired of it and decided to try my own style,” Ms. Shinoda told Time magazine in 1983. “My father always scolded me for being naughty and departing from the traditional way, but I had to do it.”

Moving to Tokyo as a young adult, Ms. Shinoda became celebrated throughout Japan as one of the country’s finest living calligraphers, at the time a signal honor for a woman. She had her first solo show in 1940, at a Tokyo gallery.

During World War II, when she forsook the city for the countryside near Mount Fuji, she earned her living as a calligrapher, but by the mid-1940s she had started experimenting with abstraction. In 1954 she began to achieve renown outside Japan with her inclusion in an exhibition of Japanese calligraphy at MoMA.

In 1956, she traveled to New York. At the time, unmarried Japanese women could obtain only three-month visas for travel abroad, but through zealous renewals, Ms. Shinoda managed to remain for two years.

She met many of the titans of Abstract Expressionism there, and she became captivated by their work.

“When I was in New York in the ’50s, I was often included in activities with those artists, people like Mark Rothko, Jackson Pollock, Motherwell and so forth,” she said in a 1998 interview with The Business Times. “They were very generous people, and I was often invited to visit their studios, where we would share ideas and opinions on our work. It was a great experience being together with people who shared common feelings.”

During this period, Ms. Shinoda’s work was sold in the United States by Betty Parsons, the New York dealer who represented Pollock, Rothko and many of their contemporaries.

Returning to Japan, Ms. Shinoda began to fuse calligraphy and the Expressionist aesthetic in earnest. The result was, in the words of The Plain Dealer of Cleveland in 1997, “an art of elegant simplicity and high drama.”

Among Ms. Shinoda’s many honors, she was depicted, in 2016, on a Japanese postage stamp. She is the only Japanese artist to be so honored during her lifetime.

When she was quite young and determined to pursue a life making art, Ms. Shinoda made the decision to forgo the path that seemed foreordained for women of her generation.

“I never married and have no children,” she told The Japan Times in 2017. “And I suppose that it sounds strange to think that my paintings are in place of them — of course they are not the same thing at all. But I do say, when paintings that I have made years ago are brought back into my consciousness, it seems like an old friend, or even a part of me, has come back to see me.”