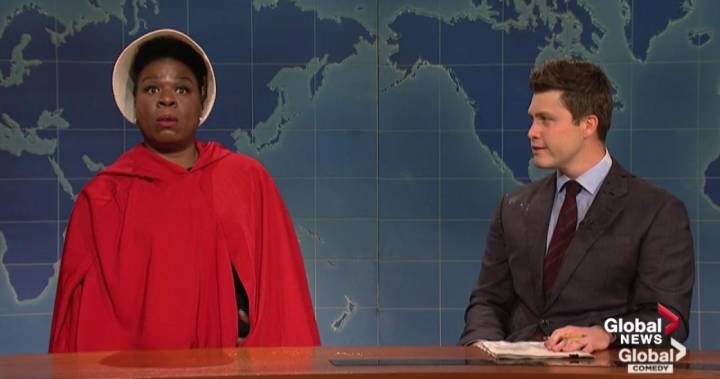 Leslie Jones had some choice words for states that have recently tabled strict abortion legislation on this week’s episode of Saturday Night Live.

“This is how it starts. I’m out living my life, and I see there are a bunch of states out there trying to ban abortion and tell me what I can and can’t do with my body. Next thing you know I’m in Starbucks and they won’t take my credit card because I’m not a woman instead of the regular reason which is, I don’t have no money on it,” she said during her appearance on the late-night comedy show.

Governors in Kentucky, Mississippi, Ohio, and Georgia have recently approved bans on abortion once a fetal heartbeat is detected, which can happen in the sixth week of pregnancy before many women know they’re pregnant, and Alabama’s governor signed a measure making the procedure a felony in nearly all cases.

None of the laws has actually taken effect and all will almost definitely be blocked while legal challenges play out.

“You can’t control women. You can’t control women, because I don’t know if you all heard, but women are the same as humans. And I’m Leslie Dracarys Jones. I mean, why do all of these weird a** men care about what women choose to do with their bodies anyways?” Jones asked the audience during her segment.

She also questioned how Alabama’s female governor, Kay Ivey, is allowing the bill to move forward. Jones’ comments came just days after Ivey signed into law the nation’s most restrictive abortion policy, which only allows the procedure in order to save a woman’s life. Any physician who provides an abortion in Alabama outside these restrictions could face up to 99 years in prison.

Jones concluded by condemning what she called a ‘war on women’ and offering fellow women her support.

“Because when women have a choice, women have freedom. The fact that nine states are doing this means that this really is a war on women.  If you’re a woman out there and you feel scared or confused, just know that you’re not alone. There are so many women who got your back, especially me,” she continued.

Her performance generated a wave of response on social media.

“Favorite part: Leslie Jones saying that she doesn’t care what old men do with their bodies so why do they care what she does with hers,” one individual shared on Twitter.

U.S. President Donald Trump said recently that he supports the right to abortion when rape or incest is involved or when the life of the mother is at stake. Those exceptions to abortion bans are also accepted by many anti-abortion social conservatives, who are an important constituency for Trump.

— With files from the Associated Press.