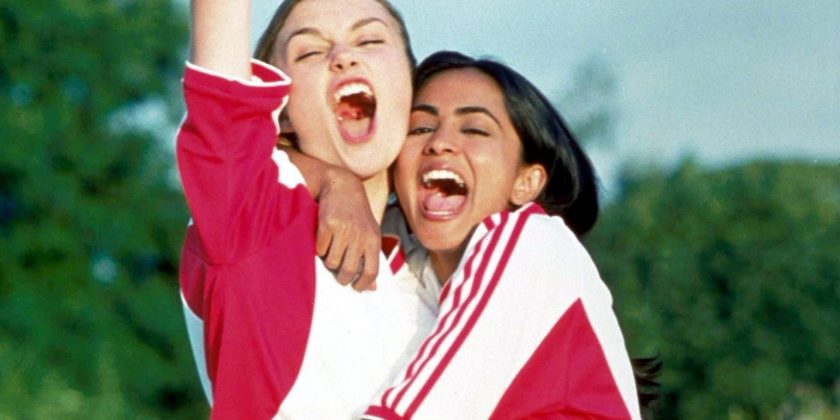 Twenty years after the release of Bend It Like Beckham, a heartwarming new BBC documentary will explore the cultural impact of the groundbreaking film.

Unbelievably, this week marks 20 years since the beloved film hit the big screen. Written and directed by Gurinder Chadha, the story follows Jess (Jesminder) Bhamra, a football-mad teenager from a conservative British-Indian Sikh family in London who battles to pursue a career in sport against the wishes of her parents.

Despite a modest budget of £3.5 million, the film went on to gross almost £60m at the box office alongside mass critical acclaim. More importantly, though, it won hearts all around the world with its engaging depiction of women’s football and representation of British Asian culture.

Now heralded as a groundbreaking film that was way ahead of its time, Bend It Like Beckham still remains culturally relevant today, especially as England prepares to host the Euros this summer. Now, a new BBC documentary will examine the legacy and impact of the film 20 years on.

Reflecting on the film in an interview on Radio 4’s Today, Chadha said that she had absolutely no idea that the film would be a huge success.

“I was making it for myself, for my cousins, for some friends,” she explained when asked about the impact of the film.

“I thought it would OK in London and some cities, maybe New York. I had no of the huge global impact of the film, and actually to this day it has one record that no other film has in the world, and that is that is has been officially released in every single country in the world including North Korea.”

New BBC documentary Bend It Like Beckham: 20 Years On will explore the cultural impact of the smash hit 00s film

When asked why she thought the film struck such a chord with viewers, particularly in the UK, Chadha said she believed the Cool Britannia movement in the 90s had paved the way for a more nuanced exploration of “what British culture meant and what being British meant”.

Chadha also revealed that the film was in part inspired by seeing former Arsenal and England striker Ian Wright wearing a union jack after an England match at the Euros in 2000.

“I started sort of conceiving a world where, you had Ian Wright on the one hand after an England match running on the pitch with a union jack,” she continued. “You could never have imagined that before; when Ian Wright did that, he did something amazing that really triggered something for me.”

“And then I just thought, why not put an Indian girl right in the heart of the sort of male English world of football at that time and see what happens when the two come together. So the three of us, my husband Paul, Daisy Bhindra, we all sort of concocted the story. And magic happened because I think the country was ready for it.”

With themes such as identity, race, gender, sexuality, religion and immigration at the forefront of the narrative, Chadha explained that the film allowed audiences to gain an understanding of difference while promoting unity.

“You’re invited into the home of a Sikh family in Britain to understand the world from their point of view. And I just think it was a great healing moment for many people and the world to be part of something that was so celebratory and culturally poignant and diverse at that time.”

Chadha also said she made the film as a way of pushing back against the restrictive societal expectations upon young women at the time. It worked, she explained, because “people felt like they were seen; people’s dilemmas, trying to negotiate who they were, are”.