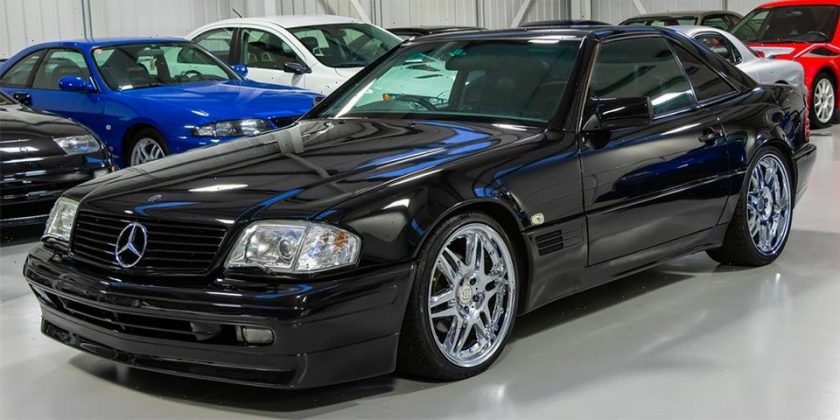 Mercedes-Benz produced some of its most handsome cars back in the 1990s, with many becoming highly sought-after modern classics in today’s market, such as this Brabus-tuned SL (R129).

The market has seen models such as the S600 — notably, Michael Jordan’s Lorinser-tuned version — and slightly newer cars such as the CLK fetch big money on the secondary market, and it’s only time that the SL, which might we add is returning under the Mercedes-AMG guise very soon, will be the next car to reach grail status in the ‘Benz family.

This particular example is offered up by Harlow Jap Autos, which is known for its imported range of Nissan Skylines, GT-Rs, Mitsubishi Evos and Nissan Silvias. The Mercedes-Benz SL Brabus 6.0-32 (R129) you see above spent its life in Japan under the ownership of an avid collector, who collected Mercedes-Benz and Ferrari, and the owner has stated that “There’s not many of them in Japan and in the convertible version they are even rarer.”

Featuring a six-liter V8 tuned by Brabus, it should go about as good as it looks. Large chrome rims offset the impeccable black paint job, while Brabus badges all around let you know exactly what the car is. A dual-tip exhaust also accentuates the car’s newfound prowess, while the interior is a then-technological ’90s throwback.

Harlow Jap Autos has the car listed for a rather considerable £39,995 GBP (approximately $53,000 USD). Take a closer look at it above, and find out more on the listing page.

In other news, a 1-of-3 Bugatti EB112 has been put up for sale.
Source: Read Full Article