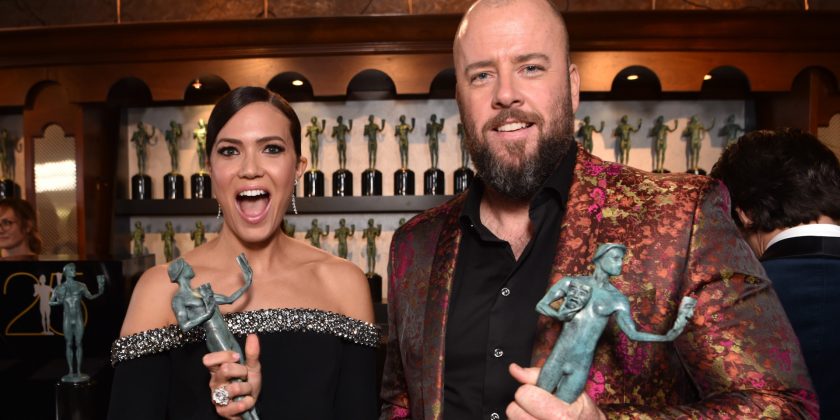 The SAG Awards featured a number of memorable moments on Sunday night, all broadcast from the ceremony hosted by Megan Mullally. However, there were also plenty of memories created behind the scenes by nominees, presenters and audience members alike. This unique awards show is the only one that solely honors performers for their craft, with actors recognizing actors for the work they’ve put in during the last year. As such, these behind-the-scenes SAG Awards photos are extra special.

We’ve rounded up some of the best behind the scenes pictures from the SAG Awards that you may have missed, because trust us: they’re worth the attention.

Prior to the SAG Awards ceremony, John Krasinski shared a super-sweet photo with his wife, Emily Blunt on Twitter, captioned, “Honored to be on the arm of this double nominee tonight!” Now, Blunt is a winner. She took home the trophy for Best performance by a female actor in a lead role for her turn in Krasinski’s filmmaking debut, A Quiet Place. During her emotional acceptance speech, she made sure to call out her husband and their two daughters from the stage.

Prior to the show on Sunday, Danai Gurira tweeted “A little sneak peek…” of her dress for the ceremony, in which she looked absolutely stunning when she and her Black Panther castmates made history by taking home the award for Best ensemble performance by a cast in a motion picture.

“Meeting SAG Life Achievement Winner Alan Alda,” Sandra Oh wrote on Twitter, alongside a sweet photo of the pair shaking hands and smiling. “Told him how much Free to Be You & Me meant to me. #Atalanta who remembers with me?”

Before she and hubby Sterling K. Brown celebrated This Is Us’ second SAG Awards win, Ryan Michelle Bathe hit the salon for some “old school” prep for the show.

After the This Is Us cast took home their win, Milo Ventimiglia recorded a video with his own speech mirroring costar Mandy Moore’s words from the ceremony. He concluded by holding up his current episode script and quoting Denzel Washington: “‘I’ll see you at work.’”

Although A Star Is Born went home empty-handed on Sunday night, Bradley Cooper and Lady Gaga were all smiles as they hugged between awards and posed for pictures.

Rachel Brosnahan got a work out with her wins

The Marvelous Mrs. Maisel star Rachel Brosnahan struggled to lift her two statuettes when she went backstage for photos. She said, laughing, “I can’t really hold them up! They’re really heavy!”

Mandy Moore’s team helped her sparkle on the silver carpet

What a night!!! ????????Thank you @jasonwu for this gorgeous custom creation- it’s an honor to wear your clothes. And an enormous thank you to my friends for getting me suited up for tonight’s @sagawards (@streicherhair, @kmannmakeup, @cristinaehrlich and @kevinmichaelericson). Shoes by @jimmychoo and jewels by @niwaka_collections. ? by @photobyjennajones #doradberad

Mandy Moore shared a series of photos showcasing her custom-made, sparkly dress and thanked designer Jason Wu and her friends for helping her get dolled up for the event.

Lupita Nyong’o also shared a series of photos to showcase her SAG Awards look, as well as photos and videos with her Black Panther castmates saluting Wakanda with their statuettes in hand.

Chadwick Boseman gave a moving speech and reiterated his words

“To be young, gifted and black…” There is a place for us. There is a screen for us. Thank you to SAG-AFRTA for the appreciation and celebration of our work. #BlackPanther #SAGAwards

Black Panther star Chadwick Boseman shared a series of photos with his castmates and by himself from the SAG Awards on Instagram, reiterating the words from his speech in his caption. He wrote, “‘To be young, gifted and black…’ There is a place for us. There is a screen for us. Thank you to SAG-AFRTA for the appreciation and celebration of our work.”

Ahead of the SAG Awards ceremony, Glenn Close joined a slew of other stars who gave fans a sneak peek into their getting-ready-routine.

Lovely lady #sagawards2019 #mylady looking beautiful—proud of you and Congratulations to all the actors work that was acknowledged by their peers this evening ? #grateful

Amy Adams’ husband Darren Le Gallo shared a striking black and white photo of the star, standing on a balcony overlooking the city. “Proud of you and congratulations to all the actors [sic] work that was acknowledged by their peers this evening,” he wrote.