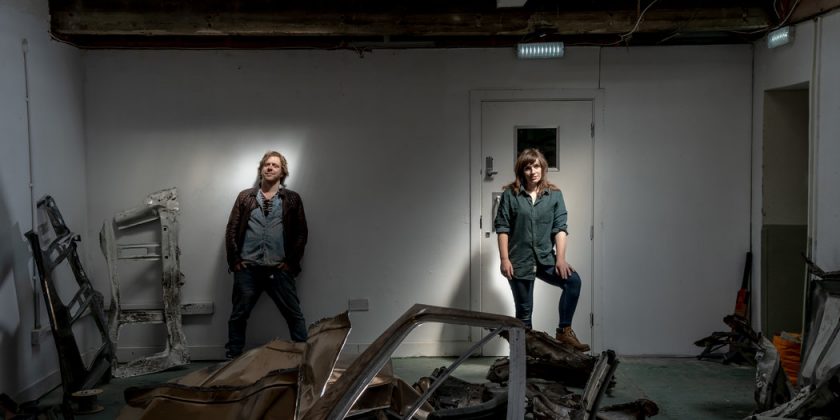 LONDON — “3 … 2 … 1 …” A deafening bang echoed around the deserted Royal Docks marina in East London, as a crowd of onlookers cheered and whooped.

The source of this ruckus on a recent Sunday morning? The exploding carcass of a gold-painted van, surrounded by fluttering paper notes, each stamped with the word “DEBT” in block capital letters. Through the rising smoke, the skyscrapers in Canary Wharf, where many banks have their offices, were just visible.

That skyline in the background was symbolically important for the explosion’s organizers, the husband-and-wife team of Dan Edelstyn, a filmmaker, and Hilary Powell, an artist. Their “Bank Job” project consists of a film and a socially engaged performance work, called “Big Bang 2.” The explosion was the piece’s climax. 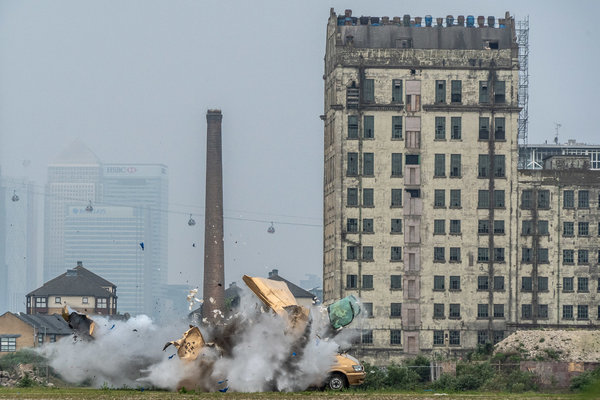 “What we’re really trying to do with our project is to raise awareness,” Ms. Powell said by phone a few days before the event. The artists wanted to “to get people into a conversation around money and debt,” she added.

In 2017, Ms. Powell and Mr. Edelstyn set up a printing press in a disused bank branch to print their own money and sell the bills as works of art. They used 20,000 pounds, or about $25,000, of the proceeds to purchase £1.2 million of debt on the secondary market, where lenders sell bad debts to collections agencies, often for a small fraction of the original cost.

The purchased debt, mostly from short-term payday loans, was canceled, so the borrowers no longer had to pay it back. The explosion of the van, which contained the symbolically stamped slips of paper, was an artistic representation of the campaign.

The idea for the project came after Mr. Edelstyn met members of Strike Debt, an offshoot of the Occupy Wall Street movement, on a video shoot in the United States in 2013. “We were the last people you would ever describe as activists,” Mr. Edelstyn said of himself and Ms. Powell. But Strike Debt had “a totally fresh way of looking at economics,” he added. “I became obsessed.

When he returned from the United States to the London district of Walthamstow, where he and Ms. Powell live, Mr. Edelstyn said he began to feel he was living in a “creditocracy,” a term coined by the sociologist Andrew Ross to describe a society in which almost everyone is in endless debt.

Waltham Forest, the area that includes Walthamstow, was ranked the 35th most economically and socially deprived borough in England in 2015, according to the local government. Mr. Edelstyn said that he could see poverty in the neighborhood growing. “We started noticing that some kids coming to our children’s school didn’t even have shoes to wear,” he said.

Mr. Edelstyn and Ms. Powell started subletting the old bank branch in 2018, and named it Hoe Street Central Bank, after its location, cheekily abbreviating it to H.S.C.B. Here, they printed bills in denominations from 1 to 1,000, with the faces of local community leaders in the place where the queen appears on British currency.

For £100, for example, you could buy “100 Traceys,” featuring Tracey Griffiths, a local school principal, on the front. (These were the most popular denomination, Mr. Edelstyn said: “Everyone loves a teacher.”)

Half the proceeds were donated to local charities, including a school, a food pantry and a youth center offering workshops and activities. The other half was used to buy the debts.

The bills were mostly bought by people who wanted to support good causes in the neighborhood, Ms. Powell said, but several British museums, including the Victoria & Albert, acquired them, too. Gill Saunders, senior curator of prints at the V&A, said in an email that Mr. Edelstyn and Ms. Powell’s bills “belong to a similar lineage of artists using bank notes as a means of protest, and as salable art works to raise funds for a cause.”

The bank branch was staffed by Walthamstow locals, who worked on printing and distributing the notes, as well as explaining the project to members of the public who came in. One of them, Alison Kay, began working there after being laid off from her job as a teacher at a local school, which she said had cut staff because it was in debt. Another “Bank Job” worker, Alistair Gentry, said his elderly and disabled parents had recently been evicted from their home because they couldn’t keep up with mortgage payments. “I really connected to what Dan and Hilary were talking about,” he said.

The Money Charity, a British nonprofit, estimated that in March the average household debt in Britain was £59,552, or about $75,500. Average weekly earnings declined 3.7 percent between 2008 and 2018, according to the British Office for National Statistics. At the same time, government austerity measures have restricted welfare payments.

Johnna Montgomerie, a researcher at King’s College, University of London, who studies debt and the economy, said in a telephone interview that it was “pernicious to just blame debtors for their own problems. It overlooks the reality that today, U.K. households are in debt out of necessity.”

Dr. Montgomerie said that banks and the government need consumers to keep borrowing to avoid a recession: “In the U.K., the financial sector still hasn’t really recovered, post-2008,” she said, referring to the global financial crisis, in which the British government offered banks a rescue package worth more than £1 trillion.

Banks were “dependent on more and more debt as a kind of guaranteed revenue stream,” she said. “We’re stuck, hoping that fresh debt will generate more returns than the already failed ones, without any real systemic reform of the financial sector.”

Mr. Edelstyn and Ms. Powell said they hoped their project would encourage more people to think about the role of debt in the economy.

“We’re talking about the need for a proper system change,” Mr. Edelstyn said. They expressed hope that they had lit a fuse to make the whole thing go “boom.”