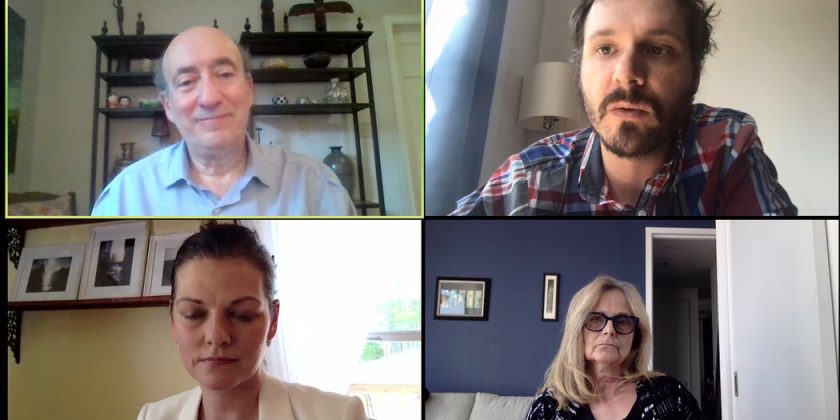 As states around the nation move toward reopening, theater actors and stage managers are protesting what they see as their union’s slow pace toward helping them get back to work.

Nearly 2,000 members of Actors’ Equity have signed a petition that asks the simple question, “When are we going to talk about the details of getting back to work?”

The petition was spearheaded by Timothy Hughes, who, in an art-meets-reality echo, is a member of the workers’ chorus in “Hadestown.”

“We feel unheard, we feel left out, and we feel way farther behind than any other industry when it comes to putting in place practical protocols that would get us back to work,” Hughes said in an interview.

The signers’ goals are basic: they are asking for a meeting with their own union officials, which seems likely to happen soon. “We are hopeful that the issue of realistic and detailed protocols to return to work can be prioritized so that funds can return to our union,” the letter says.

But the letter, which was delivered to Equity on Tuesday and is being updated daily with more signatures, reflects longstanding frustration, both by some union members and some producers, over working with Equity through the course of the pandemic.

Since the deadly coronavirus outbreak began, the union has barred its members from working on any productions in the country unless they have safety plans it has OK’d. Equity lists on its website 22 theaters where it has approved productions, but that’s a tiny fraction of the theaters in America, and some producers have said they’ve found the union nonresponsive or obstructionist.

Frustration appears to be growing in part because Equity members have for months been seeing actors in film and television, who are represented by a different union, SAG-AFTRA, returning to work. Hughes said that a recent set of revisions to the union’s safety protocols, which have been updated regularly throughout the pandemic, was troubling because it included requirements, like private transportation for actors to theaters, that seemed prohibitively expensive.

Equity, which represents about 51,000 actors and stage managers, did not immediately offer a comment, but on Monday the union’s president, Kate Shindle, and executive director, Mary McColl, wrote to members acknowledging that the landscape is shifting.

“We are proud that our safety protocols have kept workers safe, but we also know that what we have done so far during the pandemic is not enough to bring us back to where we were,” they wrote. “When enough vaccine is available for everyone, a fully vaccinated company will have less risk, which will mean streamlined safety protocols and a faster return to work.”