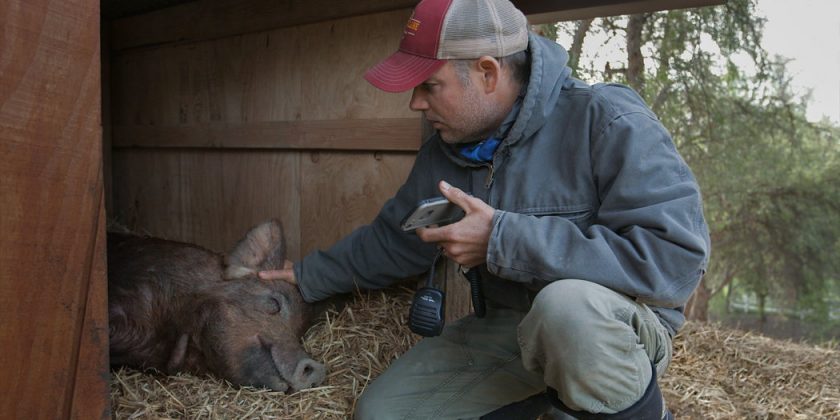 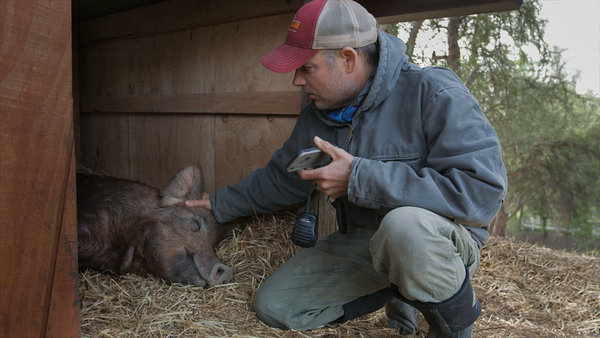 May 10; New York and Los Angeles

Dreams have a funny way of taking flight. For the Chesters it began with the incessant barking of their rescue dog, Todd, which got them evicted from their cramped Santa Monica apartment. And in no time, John, a filmmaker, and Molly, a chef, were betting their future on 200 depleted acres an hour northeast of Los Angeles, where their fantasy of earthly delights could become a reality — and Todd could run free.

“The Biggest Little Farm,” opening Friday, May 10, follows the Chesters across eight years as they resurrect Apricot Lane Farms with the help of Alan York, an expert in biodynamics who understands the interplay of root, hoof, snout, claw and beak in creating healthy soil. The road is rocky: Drought, wildfire, torrential rainfall and predatory coyotes, starlings and snails wreak havoc. But the farm reawakens, blossoming into a veritable Eden of diversity as cover crops, stone fruits, sheep, cattle and chickens, along with Emma the pig and Greasy the rooster, secure their place in the ecosystem. It’s a lesson in the divine coalescence of nature and nurture, and utterly joyful, inspiring viewing. KATHRYN SHATTUCK

American Ballet Theater returns to the Metropolitan Opera House for its spring season, with some refreshing departures from business as usual. While the eight-week lineup includes a few familiar war horses (“Le Corsaire,” “Manon,” “Swan Lake”), it also features a newer story ballet: the company premiere of “Jane Eyre,” by the British choreographer Cathy Marston, created for England’s Northern Ballet in 2016 (June 4-10). And for those who prefer shorter pieces over full-length fare, two attractive options await: a trio of works by Alexei Ratmansky, including the premiere of “The Seasons,” to music by Alexander Glazunov (May 21-23); and a Twyla Tharp triple bill, including her sublime “In the Upper Room” (May 30-June 3).

As Ballet Theater’s resident artist, Ratmansky has become known for his careful, lavish reconstructions of ballets dating back more than 100 years. The season opens with one of these (“Harlequinade,” May 13-18) and closes with another (“The Sleeping Beauty,” July 1-6). His decadent “Whipped Cream” also returns, May 24-29. SIOBHAN BURKE

Shortly after the death of the Baroque composer Henry Purcell, a publisher compiled a two-volume edition of his vocal music, including gems like the love song “Sweeter Than Roses.”

“The author’s extraordinary talent in all sorts of musick is sufficiently known, but he was especially admir’d for the vocal, having a peculiar genius to express the energy of English words,” the collection’s foreword stated. It was titled “Orpheus Brittanicus,” and the reference couldn’t be more clear: Purcell was England’s greatest musical bard. “England’s Orpheus” is also the title of a May 16 concert at Zankel Hall featuring the countertenor Iestyn Davies and the lutenist Thomas Dunford, with the music of, among others, Dowland and Handel, two composers also likened to Orpheus in their times. WILLIAM ROBIN

Art: A Thread of Undying Inspiration

Why do we keep going back to the classics? From the Renaissance to the Ballets Russes, a Parisian dance troupe that amazed and scandalized European audiences for two decades in the 1910s and 20s, ancient Greek art has been an inexhaustible font of inspiration and ideas. The sumptuous “Hymn to Apollo: The Ancient World and the Ballets Russes” at the Institute for the Study of the Ancient World includes timeless objects, costume designs by Léon Bakst, and photographs of Nijinsky as a faun. And all of it suggests that in part it’s the fragmentary nature of the surviving record that makes classical art so alluring: How could you look at the undulating maenad on this drinking vessel without imagining the music she’s listening to, or the steps that led her to her unforgettable pose? WILL HEINRICH

But “Line of Duty” has long been Mercurio’s calling card. Set amid the fictional Anti-Corruption Unit 12, the much-loved police procedural follows Superintendent Ted Hastings (Adrian Dunbar) and Detective Sergeants Steve Arnott (Martin Compston) and Kate Fleming (Vicky McClure) as they sniff out rogue cops within the force. And there are plenty lurking.

Season 5 starts off fast and furious with the hijacking of a police transport carrying seized drugs, and three officers shot dead by a crime ring led with the diminutive madman John Corbett (Stephen Graham) as its leader. Meanwhile, the hunt for “H” — the dirtiest cop of all — continues as the suspect list dwindles.

“Line of Duty” debuts in its entirety on Monday, May 13, on Acorn TV, with a sixth season already ordered. KATHRYN SHATTUCK

Theater: A Marathon of One-Acts

If you’ve sat through a three-hour production lately, or one that hit two hours sans intermission, you may have noticed: The extra-long play is back in vogue — and it can be a little overwhelming. So the biennial Marathon of One-Act Plays at Ensemble Studio Theater feels like a particularly welcome bit of counterprogramming.

Starting on Sunday, May 12, and divided into three overlapping series, it offers a menu of bite-size works by playwrights both up-and-coming (like the buzzed-about Lily Houghton, whose “Rosie” is in Series A) and established (like Lloyd Suh, whose “Mandarin Duck” is in Series C). At the marathon in 2015, audiences saw a stunner of a short play by Martyna Majok that she later expanded into “Cost of Living,” which won the 2018 Pulitzer Prize. What might emerge from this year’s bunch? It’s worth venturing into Hell’s Kitchen to see. LAURA COLLINS-HUGHES

An enduring but underrecognized figure in rock, Alejandro Escovedo began his career on the San Francisco punk circuit, playing guitar for the Nuns in the late 1970s. But Escovedo, the son of a Mexican immigrant, felt the pull of his home state, Texas; he moved back in 1980, and a while after emerged as a solo artist, making roots music steeped in the sounds of the American Southwest.

More than a dozen studio albums later, Escovedo teamed up with the Italian group Don Antonio to create a concept record about the immigrant experience. Released in October and titled “The Crossing,” it centers on two young men — Diego, from Mexico, and Salvo, from Italy — navigating the dubious promises of the American dream. Having recently wrapped a cross-country tour in support of the album, Escovedo returns to New York on Friday for back-to-back sets at the Rubin Museum. OLIVIA HORN