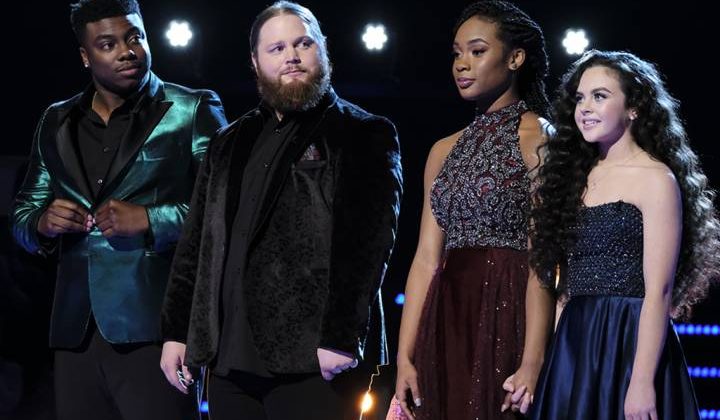 SPOILER ALERT: Do not read on unless you’ve watched The Voice Season 15 finale.

The winner of The Voice was crowned on Tuesday night for the milestone 15th season of the hit reality singing competition series.

Coach Adam Levine and his final student, Reagan Strange, were eliminated from of the competition last week, leaving it down to “Team Blake, Kelly or Jennifer.”

Shepherd and Kroeze went head-to-head upon being announced as semi-finalists, while Jay and Holmes respectively took the third and fourth positions.

After a blazing performance with American country duo, Dan + Shay, Shepherd claimed the throne and was crowned the winner of the competition.

The duo performed their original song, Speechless, with the 16-year-old “country Tinkerbell.” They wowed millions of viewers across the continent.

This marks Team Kelly’s second win in a row. Clarkson and Brynn Cartelli, 15, won the Season 14 finale back in May.

Many believed Shepherd’s debut and performance of her original song Broken Hearts was what won her the competition. The country singer had the audience in awe.

Clarkson and other fans of The Voice took to social media to celebrate Shepherd’s victory.

Many fans of the show were outraged by the result, with most viewers hoping for Holmes to win the competition.

“Wow, I do not agree with the winner this year,” wrote a user. “Kennedy should have won hands down!”

Some fans were so shocked by the end result that they vowed not to watch The Voice “ever again.”

“Not really happy with this finale,” wrote another fan. “This show has fat-shamed the true winner, I’m never watching again!”

John Legend will take over for Hudson in 2019 and join the rest of the judges, Levine, Shelton and Clarkson.

He recently shared his excitement in a press release. “I’m so excited to discover talented singers and help them make the most of their gift,” he said.