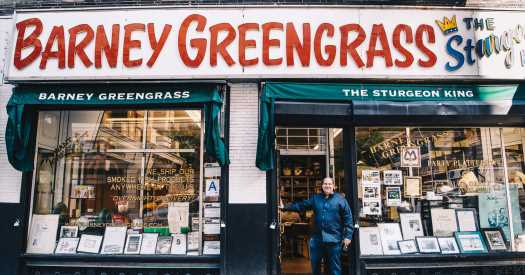 In this series for T, the author Reggie Nadelson revisits New York institutions that have defined cool for decades, from time-honored restaurants to unsung dives.

New York is the most intensely tribal city I know. I am a lifelong downtown denizen, and when I went to Barney Greengrass on the Upper West Side last week, it was my first visit to the legendary — and that’s no hyperbole — shop and restaurant on Amsterdam Avenue and 87th Street, where it’s been for 90 years. Inside, the store has remained virtually unchanged since 1929, when it moved here from Harlem. There are the original Art Deco-ish baked enamel and white porcelain counters, a few stools where customers perch to enjoy a quick meal — a Columbia professor with a lox and bagel, a lawyer in early to nosh a blintz. Barney Greengrass, who learned his trade working at an appetizing shop downtown in the early part of the 20th century, founded the original store at the corner of West 113th Street and St. Nicholas Avenue in 1908, when Harlem was still a heavily Jewish neighborhood. In those days, the shop was a smaller place that sold smoked fish and bagels and served locals, many of whom, like Greengrass, were Jewish immigrants from Eastern Europe with a taste for smoked and salted fish.

Today, the display cases are crammed with smoked fish, herring, gefilte fish, potato salad, blintzes and latkes, the marble counters piled with bagels, bialys, babka, rugelach, black-and-white cookies — all the things beloved of New York Jews. Of course you can get it all downtown. But I’m here not just for the Nova; I’m here to celebrate Philip Roth, who died just over a year ago.

[Coming soon: the T List newsletter, a weekly roundup of what T Magazine editors are noticing and coveting. Sign up here.] 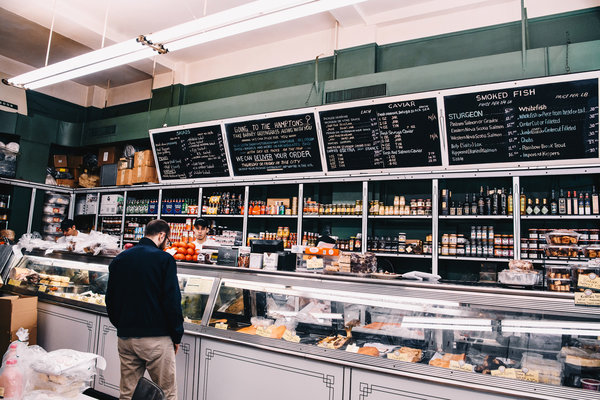 In “Operation Shylock” (1993), one of Roth’s wildest and funniest novels, the main character, named Philip Roth, describes what is clearly Barney Greengrass as the place where he goes to “satisfy my own inextinguishable appetite for the chopped-herring salad as it was unceremoniously served up (that was the ceremony).” I love Roth’s books for the brilliant writing, the language, the characters, but also because even in the darkest novels he seems so alive, so vivid and funny, and so hungry! (Who can forget the fresh fruit in a dedicated fridge at the suburban Potemkin house in “Goodbye, Columbus,” or the jar of Tiptree Little Scarlet strawberry preserves that Mickey Sabbath swipes from his rich Upper West Side friends in “Sabbath’s Theater”?) The current owner of Barney Greengrass, Gary Greengrass, the grandson of the store’s eponymous founder, says of Roth, “When he came in, we used to kibitz and he signed a book for me.”

Also in “Operation Shylock,” Roth describes the down-home old-time ambience at Barney Greengrass. The “Jewish food store on Amsterdam Avenue specializing in smoked fish,” he writes, “looked as though, years back, when someone got the bright idea to ‘modernize,’ the attempt at redecoration had been sensibly curtailed halfway through.” The value of vintage is not lost on Gary, who tells me he has gone to a lot of trouble to preserve it, even hiring an artist to touch up the drab 1970s brown-and-beige wallpaper with its pictures of old New Orleans.

Beyond the shop is the restaurant that serves breakfast and lunch to its obsessively devoted clientele that has included Nora Ephron, Jerry Seinfeld and Anthony Bourdain. To mark Bourdain’s passing last year, an empty table was set with his favorite Nova Scramble (lox and eggs) and a toasted bialy — as if waiting for the prophet to return.

This is a store that has real cultural chops. The Upper West Side has been heavily Jewish from the time German Jews arrived at the turn of the last century; more European Jews came in the 1930s, fleeing Hitler. Barney Greengrass has always been a gathering place, a place to eat and gossip and maybe make a deal.

As I walked cross town from the subway, I passed the great apartment buildings on Central Park West, the brownstones sleeping in the sun on 87th Street. This is a different New York from the city of the 21st century; filled with gorgeous buildings, it is quieter, greener, more residential. There are fewer fancy shops and far fewer chic restaurants, in part because their owners say you can never get locals out for a late meal. If the neighborhood is full of comfortable writers and editors, not to mention lawyers and TV executives, there is also a large population of older folk, largely Jewish, and none of them can live without the Greengrass sturgeon and Nova.

Once, smoked sturgeon was the food of czars more than shtetl Jews, from whom so many of us are descended, including the Greengrass family. Barney Greengrass, born in the late 19th century, was one of the earliest shopkeepers to spread the word and the sturgeon. “We Ship Our Products Anywhere in the U.S. Overnight Delivery,” says a sign on the shop window. “My grandfather decided to start shipping his products in the 1930s,” says Gary. “He would ship his smoked fish by U.S. mail parcel post and there was a label that said, ‘If Not Delivered in Three Days, Forget It.’”

Gary went to New York University for broadcast journalism, but like so many of the great small New York businesses now run by third, fourth and fifth generation family members, Barney Greengrass, the store and restaurant, was his destiny. The perfect frontman, Gary never met a joke he didn’t like to tell, but he also knows his fish. For years, he worked with his father, Moe, son of Barney (when Moe joined in the 1930s, it was Barney Greengrass and Son). Some mornings at three they would visit the smokers who turned fresh fish into exquisite smoked sturgeon. Back then, most of the fish came from the Great Lakes or Canada. “By 35 years ago, there were no sturgeon left,” he says, noting that these days it’s all farmed. “The flavor is actually better,” he adds. “The variations in each fish are what give it its texture and flavor.’”

If Barney Greengrass purveys a kind of ethnic joy, it also has the raffish air of a place where deals have been done and politics played. It was James J. Frawley, an early 20th-century New York state senator and regular customer, who gave Barney his name in 1938: “the Sturgeon King.” The following year, Barney sent 10 pounds of sturgeon to Franklin D. Roosevelt for Thanksgiving dinner. But the most discreet of power breakfasts are held here in relative obscurity, like an Italian social club with lox. Says Gary, “I introduced the late New Jersey senator Frank Lautenberg to Philip Roth one day — two guys from Newark.”

On the afternoon I went, I settled in at a table. A woman wearing a tie-dyed tunic went by. Opposite me were a mother and son and a couple of women with grandkids. “I love this place because it binds the generations,” said Joey, a waiter who has been here since 1997. I turned to my copy of “Operation Shylock.” In it, Roth asks for “the chopped-herring salad on a lightly toasted onion bagel. Tomato on the side. And bring me a glass of orange juice.” I skipped the juice and had a side of smoked sturgeon and went on reading.