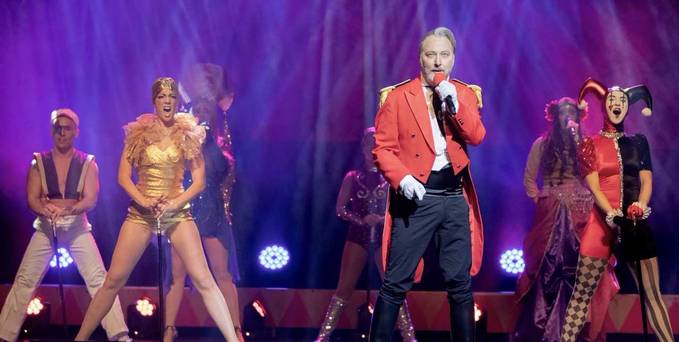 Five years ago singer, producer, director and actor Peter Corry began working on the concept for a cabaret show which ultimately evolved into ‘The Showman is Coming’, a spectacular cabaret with a circus theme, complete with ringmaster, bearded lady, strongman, and circus performers.

It might sound a little familiar.  Indeed the images of the show itself – with Peter as Ringmaster – have definite echoes of The Greatest Showman, the Hugh Jackman-starring musical film that became a smash hit when it hit the big screen in 2017.

However, Peter insists his show came first.  Originally he envisaged a show with songs from all genres from rock to pop, and opera to swing and when he was commissioned to stage it for a convention in Belfast it became The Showman Is Coming.

“Four or five months later The Greatest Showman came out,” he laughs. While Peter is aware that people, at first glance, may suspect he invented the show simply to ride on the coattails of the success of the film, he says that any benefit in association has been down to timing rather than intent.

“[The Greatest Showman] brought a lot of people to musicals and to film musicals and what it has given us is an opportunity to put The Showman is Coming on on a very big scale.  So I’m delighted!” he says. Unlike the film there is no narrative, it’s simply a showcase of some incredible songs including crowd-pleasers like Queen’s Somebody to Love and The Show Must Go On, Elton John’s Your Song, Conchita Wurst’s Eurovision winner Rise Like a Phoenix and songs from Eurythmics and Kate Bush. “I’ve been so delighted with the response this show has had,” says Peter, whose wife Fleur Mellor has orchestrated the impressive choreography in the show. “Somebody said it’s like putting burlesque, circus, pop, Bollywood, jazz, and musical theatre all in the one show to create something unique.”

Peter has been blazing a trail in musical theatre and beyond for two decades. He has performed all over the world from Las Vegas to the West End, singing for 70,000 fans at Old Trafford, at an Ireland/England Six Nations rugby game, and at George Best’s funeral in 2005. Belfast-born, he grew up against a backdrop of The Troubles, although he says his family “steered clear of all that”.

“You just didn’t know any different. You didn’t really know anything else.  Going into Beflast and being searched to do the shopping was just the norm, but thank God that’s not the case anymore,” he says.

“I was brought up in a working class family but we stayed clear of all that.  We didn’t get involved in anything like that and that was a good thing.”

He spent his time in the Salvation Army honing his music skills alongside the rest of his family.  His father (89) still plays in a brass band which is conducted by his brother.  Peter came to musical theatre relatively late in life – he did not even see a musical until he was 22.

Shortly thereafter he won an RTE talent show, and was given tickets to see Cameron Mackintosh’s production of Les Miserables on the West End.  The experience changed his life.

“I sat at the interval and apart from being moved – it’s one of those shows that if you do like it you really like it – all I could think of was, ‘I want to be in that show.  I really want to get that experience and a chance to be part of that,’” he says.

“Certainly I think I set myself goals in life and [performing in Les Mis] has certainly been one of those.”

Peter was later cast as Inspector Javert in the West End and UK tour of Les Mis and spent three years there, receiving rave reviews for his performance.  There is, he believes, a special relationship between that musical and Ireland.

“It’s no mistake that over the years many of the actors who have played leading roles are Scottish or Irish or Welsh.  We Celts wear our hearts on our sleeves when we perform and with Les Mis you’ve got to wear your heart on your sleeve,” says Peter.

“Without doubt there is a love affair with the Irish people.  It goes right back to when Colm Wilkinson first played Jean Valjean [in the original 1985 production] and created that role.”

Les Mis also features in what Peter feels is one of his proudest moments in the world of musical theatre.

When he left the West End in 2001 Belfast was, he says, “coming out of a dark period and things were looking a bit better.”  The 10,000 seat Odyssey Arena had just been built, and Peter approached Cameron Mackintosh about staging a concert version of Les Mis in his home city.

“He said, ‘No Peter, I wouldn’t but I’d be more than happy for you to do it,’ so I produced Les Mis, the concert version, with a choir of 1000 and cast from all over the world taking part and I will always remember that as something where I thought, ‘This is important’,” he reveals.

“Even kids who were once in the choir will say now they were part of that choir and that’s a big thing for me, and the message of Les Mis is so important.”

These days Les Mis has been surpassed by Hamilton in the affections of many young people involved in musical theatre.  Lin Manuel Miranda’s American musical is inspired by the biography Alexander Hamilton by Ron Chernow features a diverse cast of actors singing and rapping  the story of American Founding Father Alexander Hamilton.

As the Artistic Director of Northern Ireland’s leading theatre school for young people, The Belfast School of Performing Arts (BSPA), he sees the impact it has had on those hoping for a career on the stage.

“I brought over the musical director and choreographer from Broadway for a workshop with the kids last month and oh the buzz around that show is immense.  I went to see it six weeks ago and I have to say I’m not into hip hop or rock but it’s beautifully staged and I just thought I can see why it appeals,” he says.

“Even with my own kids, my eldest is not really into musicals.  He’s 26 and he was in the car with me and said, ‘Dad, you’ll be really pleased I like a musical.’  I said, ‘Let me guess – Hamilton?’.  Musicals are cool again.  Maybe dad’s job isn’t quite so embarrassing!”