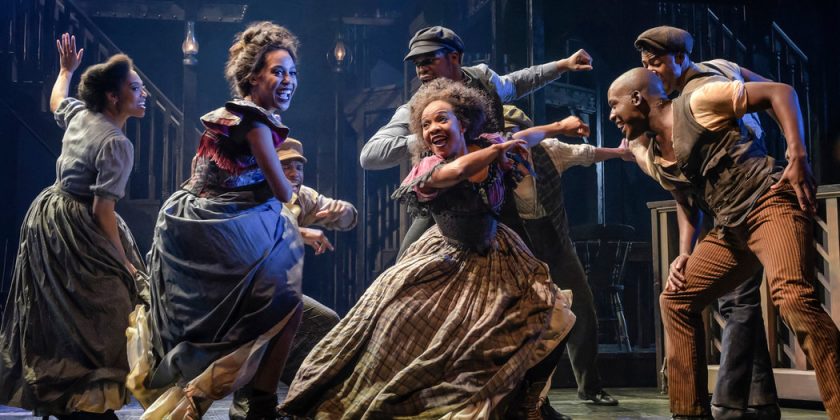 BERKELEY, Calif. — Larry Kirwan was just a boy, growing up in Ireland, when he began to hear stories from his grandfather about the Five Points, a chaotic neighborhood in 19th-century New York where many an Irish immigrant had settled alongside African-Americans, building a community that flourished and flamed out.

The stories stuck with him as he became a musician, as he moved to America, as he told his own tales.

Now a show he began crafting a decade ago, depicting a multiracial community bound together by misery and music, has become a full-fledged stage production, “Paradise Square,” where it is the costliest musical that the nonprofit Berkeley Repertory Theater has ever mounted.

The musical, which opened to mixed reviews but has been extended through March 3, has an impressive creative team. The director is Moisés Kaufman (“The Laramie Project”); the choreographer is Bill T. Jones (“Spring Awakening”); and the book is credited to three playwrights — Mr. Kirwan, who originated it, Craig Lucas, who did the first round of revisions, and Marcus Gardley, who wrote the latest version.

“It’s about two brutalized peoples, Irish and African-American, one fleeing famine, and one fleeing slavery, who meet in the Five Points, and, for a brief moment, change the flow of American history, until America catches up with it,” Mr. Kirwan said. “It’s not kumbaya, but it happened, and that’s what’s hopeful about it.”

It has a score that is at once familiar and new: rearranged and re-lyricized songs of Stephen Foster, the 19th-century composer celebrated for his contributions to early American pop music but criticized for his work on minstrel shows. Foster spent the final months of his life in the Five Points neighborhood, and is a prominent and problematic character in the show — talented but often untruthful, ambitious but often intoxicated.

The show has a commercial patron who is also familiar and new — Garth Drabinsky, the onetime impresario who served time in Canadian prison for fraud, and is now attempting to re-establish himself as a theatrical producer.

“The public will tell me whether this is a comeback — I can’t predict anything — but I am certainly exhilarated watching the audiences,” he said. “I’m just thrilled to be back where I always longed to be, and doing what I always longed to do, which is to creatively produce theater.” 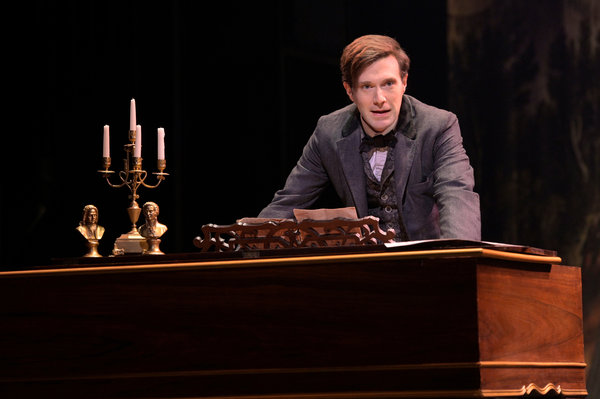 The Five Points, located in Lower Manhattan, was one of the worst slums America had ever seen, and its violent conditions inspired a Martin Scorsese movie, “Gangs of New York,” set in 1846.

“Paradise Square” takes place in 1863 and explores a different aspect of the neighborhood — the creative and romantic energy generated by the mix of people living in the area, but then disrupted by class, race, and economic tensions associated with the Civil War, which eventually led to the New York City draft riots. The musical is set in a dance hall, and depicts the mixing of African and Irish traditions that contributed to the development of tap as a dance form.

Mr. Kirwan, best known as the lead singer of Black 47, said the idea for the musical was born of his curiosity about the Five Points, which he heard about from his grandfather, and his affection for Foster’s songs. He learned to appreciate the songs in Irish pubs, where, he said, he heard workers imbue them with emotion he had not initially recognized.

Learning that Foster had briefly lived in the Five Points inspired him to write a show combining the songs and the place; his initial version of the musical, titled “Hard Times,” opened to positive reviews at the Cell Theater in New York in 2012 and had a brief return engagement in 2014.

Peter LeDonne, a longtime collaborator of Mr. Drabinsky’s, saw the show in New York, and invited Mr. Kirwan to Toronto to meet with Mr. Drabinsky, a storied figure in North American theater, who ran Livent when the company won Tony Awards in the 1990s for “Kiss of the Spider Woman,” “Show Boat” and “Fosse,” then saw his career come to a halt when he was indicted on financial misconduct charges in the U.S. and Canada.

He was convicted in Canada and served time there. He had been released when he invited Mr. Kirwan up but was not traveling to the U.S. because he was facing charges here; those have since been dropped. In an interview in Berkeley, he called his legal troubles “a painful chapter in my life, that cost me in so many ways, but is behind me now.”

Mr. Drabinsky was eager to restart his work in theater, and had experience with musicals that deal with racism in American history, having produced “Parade” and “Ragtime,” as well as a revival of “Show Boat.”

“Listening to this music I know is 150 years old and sounds like it was recorded yesterday, I got really excited about it,” he said.

He had never before worked with an American nonprofit, but brought the project to Berkeley Rep about two years ago. Nonprofits have become more significant players in musical theater development in the years since Mr. Drabinsky was last active in the business, and Berkeley is a prestigious theater with experience doing such work.

The deal was not negotiated lightly. Berkeley’s leadership had extensive conversations about whether to work with Mr. Drabinsky, given his conviction, before deciding to proceed.

“We took the position that, in an enlightened society, when somebody does something wrong, you want to think that after they pay their dues they can be resurrected in society,” said the theater’s managing director, Susie Medak. “Maybe that’s Berkeley values, but it felt as though it would be wrong to simply hold that against him.”

The deal was also costly, in part because the show has a large cast of 32, plus an eight-person band. Mr. Drabinsky agreed to spend $3.2 million on the production — the biggest commercial enhancement ever at Berkeley — and the theater spent another $2.5 million (including the value of its staff time) on the show.

Ms. Medak said that, given Mr. Drabinsky’s past, there were no handshake agreements; everything was committed to writing and signed before anything proceeded.

“Garth can’t afford to not make this work, because if he stiffs us he will never work again — he knows that, and we know that, and in many ways that makes him a safer bet to us than anyone we’ve ever worked with,” she said. “And I’ve become very fond of him. He is a person of the theater, who knows the craft and knows artists and understands at the core what they do.”

The show is not Mr. Drabinsky’s first effort at a comeback. He produced “Sousatzka” in Toronto, but set it aside after it opened to punishing reviews.

Mr. Drabinsky pulled together the new “Paradise Square” creative team, which includes Jason Howland, working with Mr. Kirwan to rearrange Foster’s songs, and Nathan Tysen, writing new lyrics for those songs. “They were the pop songs of the day, but at the end of the day they were not theatrical — they were much more about a mood or an idea,” Mr. Tysen said. “We had to make them dramatic.”

The director, Mr. Kaufman, had explored the intersection of the personal and the historical, not only with “The Laramie Project,” about the murder of Matthew Shepard, but also with “Gross Indecency,” about the trials of Oscar Wilde, and “I Am My Own Wife,” about a transgender German antiquarian.

Like other members of the creative team, Mr. Kaufman said he believes the show is particularly resonant now, as America once again grapples with its attitudes toward immigration and race.

“I’m fascinated by how we can discover the ideologies which we live under, so this was perfect for me,” he said. “The Five Points seemed like a really interesting social experiment. It wasn’t an ideological utopia — they were there because they could only afford to be there — and yet they were doing this thing that we all say we’re interested in doing, and it interests me to think about why it blew up.”