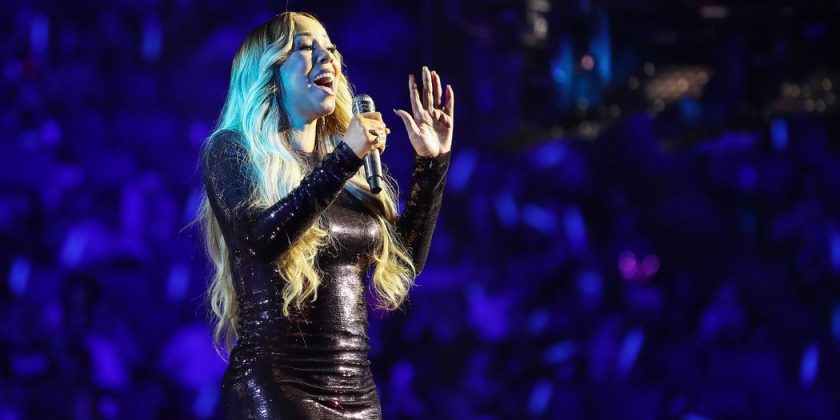 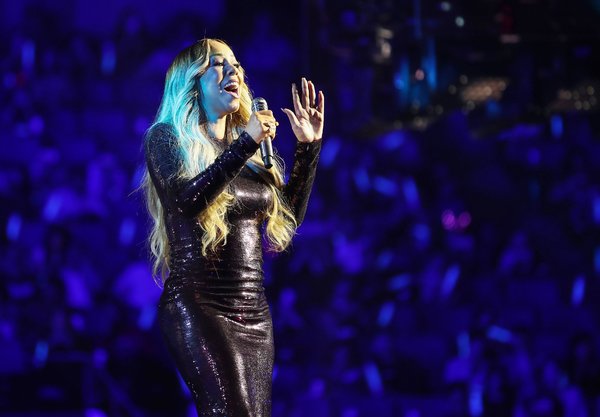 Every Friday, pop critics for The New York Times weigh in on the week’s most notable new songs and videos — and anything else that strikes them as intriguing. Just want the music? Listen to the Playlist on Spotify here (or find our profile: nytimes). Like what you hear? Let us know at [email protected] and sign up for our Louder newsletter, a once-a-week blast of our pop music coverage.

The title of Mariah Carey’s new album, “Caution,” sums up her shrinking horizons in the 21st century: murmuring where she used to belt, gently scratching where she once was velvety, striving to insinuate strategically rather than to overwhelm. “Caution” itself admits to lust but sets conditions: “Don’t be dishonest” and “Touch me in a different kind of way.” A trendy, minimal production, uses a thin, synthetic, Latin-tinged beat, with Carey’s old trademarks — the melismatic asides, the way-up-there whistle tones — mixed into in the background. Upfront, she is cooing both “Proceed with caution” and “I need you closer to love me harder,” tempering desire with self-preservation. JON PARELES

“Shake that booty, if you wanna/Drop that booty, it’s your choice”: That’s the chorus of the song at the center of this satirical “Saturday Night Live” sketch, which sends up hip-hop’s longstanding indifference to conversations about respect and consent. “S.N.L.” cast members Kenan Thompson and Chris Redd are the main rappers here, and they rap as well as comedians. Over production that’s notionally Southern influenced, they opine about various ways to establish better boundaries. But the real humor comes from the high-profile guests: Lil Wayne, who cheerily delivers a surprisingly nimble verse, and Future, who raps “Hendrix steal your girl, but only with her permission,” and makes it rain into a collection jar for women’s rights activism. JON CARAMANICA

The first member of the K-pop outfit Blackpink to strike out on her own, Jennie is versatile and effective on “Solo,” her first single. She sings in Korean, raps in English and, in the video, dances and pouts with equal intensity. CARAMANICA

Oblivion sounds luxurious and blissful in “Lux Prima,” a nine-minute mini-suite by the producer and musician Danger Mouse (Gnarls Barkley, Broken Bells, Norah Jones, Black Keys) and Karen O from Yeah Yeah Yeahs, who sings, “I’m nowhere, I’m no one, I’m nobody/There’s nobody but you.” Using deliberately wavery pitch to suggest an analog past, the backdrop summons the spaciousness of spaghetti-Western soundtracks and the steadiness of Krautrock via Stereolab; the final section lets anticipation build behind a repeated, whisper-sung word: “Flash!” PARELES

The year after Bobbie Gentry released her indelible 1967 hit, “Ode to Billie Joe,” she came out with “The Delta Sweete,” a far less commercial concept album about her Mississippi roots. Among those who have rediscovered its songs is the psychedelic band Mercury Rev, which has remade the album with guest singers — among them Norah Jones, Lucinda Williams, Phoebe Bridgers and Laeticia Sadier — for release in February as “The Delta Sweete Revisited.” Its preview is “Sermon,” a prayer and a warning — “God Almighty’s gonna cut you down” — sung by Margo Price. Mercury Rev replaces Gentry’s brisk, nearly rapping original with swelling orchestral drones, the better to reveal the song’s fearful awe. PARELES

Profound despair yields to unbreakable resolve in “The Big Unknown,” a gorgeous, darkly luminous dirge that continues Sade’s gradual and welcome re-emergence. “No way to measure my pain,” she sings with calm certainty, but she also vows, “Here in the deep below, I will rise.” Tolling piano chords and somber strings share her descent, then bolster her will to go on. PARELES

On their new album, “Invisible Sounds,” the trumpeter Ingrid Jensen and the tenor saxophonist Steve Treseler pay tribute to Kenny Wheeler, a Canadian-British trumpeter who died in 2014, leaving behind a book of lovely, warm-blooded compositions. The album opens with a studio recording of the charging “Foxy Trot,” and it ends with this live take. Onstage, Jensen and Treseler’s quintet skips the studio version’s lengthy, drifting intro, and they kick the tempo up by a hair. On her solo, using what sounds like a wah-wah pedal, Jensen emphasizes both the slipperiness of the tune’s melody and the traction of its rhythm. GIOVANNI RUSSONELLO

One of the few remaining unfettered pleasures in hip-hop is the half-sequitur flow of 2 Chainz, and on “Hot Wings,” his start-stop, left-jab-right-jab approach makes bizarre stops at “I go Bruce Wayne on you peons,” “ring cost a Jag” and “curve game on BluBlocker.” Wacko fun. CARAMANICA

“Adicto” is Marc Anthony’s first bachata song, and there is likely a good reason for that. Bachata is a genre that prizes sensuality and caress. It is slick and subtle, things the bazooka-voiced Anthony is not. And so “Adicto,” a collaboration with Prince Royce, one of bachata’s biggest stars, sounds like an argument of reason vs. aggression. This is Royce’s turf, and he’s a whispery singer. But every time Anthony arrives, it sounds like he’s delivering a tsk-tsk lecture, shouting down a foe. CARAMANICA

Alec Benjamin’s “Water Fountain” plugs into high-school experience: “She told me that she loved me by the water fountain,” he exults — but then he sees her kissing another guy. She has drifted away, while he’s feeling voyeuristic. Benjamin’s voice is androgynously high and unabashedly processed, over a stately programmed beat, but the distress of a thwarted crush is unmistakable. PARELES

A piano motif like a five-note mantra recurs throughout this eerie, reticent, metaphysical lullaby from Alison Sudol’s EP “Moon.” It’s a meditation on memory and change, on trauma and comfort, on closeness and letting go. “You were never meant for the keeping,” Sudol muses, making peace with the inevitable. PARELES

A primo straight-ahead jazz pianist, Aaron Goldberg plays each melody with careful attention, letting joy emerge from within. On his new album, “At the Edge of the World,” Goldberg is joined by the bassist Matt Penman and the (all-too-rarely heard) drummer and percussionist Leon Parker, whose strategy is more effervescent. Their cover of Luiz Bonfá’s “Manhã de Carnaval” provides a wonderful showcase of their complementary styles. Goldberg plays nimbly against Penman’s lissome bass, phrasing things just behind the beat, then just ahead, but never coming off-track. Parker shows the same sensitivity, but he also lets himself go: On a vocal-percussion cameo, he’s practically bursting. RUSSONELLO

Jon Pareles has been The Times’s chief pop music critic since 1988. A musician, he has played in rock bands, jazz groups and classical ensembles. He majored in music at Yale University. @JonPareles

Jon Caramanica is a pop music critic for The Times and the host of the Popcast. He also writes the men’s Critical Shopper column for Styles. He previously worked for Vibe magazine, and has written for the Village Voice, Spin, XXL and more. @joncaramanica