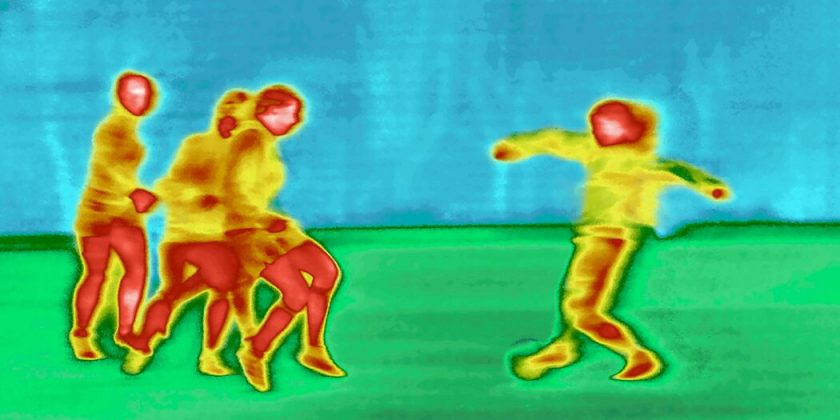 One warm spring day in London last year, I set off for a run to Hyde Park, a soccer ball wedged under my arm. The country, like the rest of the world, was still coming to grips with Covid-19; for weeks, I had been confined to my apartment, counting the days until restrictions would ease. Now that we were finally permitted meaningful time outside, I was eager to reclaim my favorite place, the soccer pitch.

In the park near my flat, I sat beside a group of French boys kicking a ball around. Eventually I joined them, and we juggled the ball between us. Within minutes, we settled into a game, using our bags to make goal posts and trees to indicate the sidelines. I experienced a strange and familiar lightness, the gradual peeling away of the day. In that moment with those French boys, I felt just how universal this game was. Here on this patch of grass and around the world, strangers of every background and experience level play pickup soccer, or foot de rue or pelada or cascarita. And they do it on concrete, sand, cobbled streets, anywhere they can.

My habit of playing began on the concrete tennis court of my elementary school in Toronto, where I was new and friendless, having recently moved from the suburbs. When I first walked into the classroom, I overheard another kid whisper, “Does she even speak English?” Every recess, I resolved to blend in, playing the game with my awkward, gangly limbs. I hoped that there, at that mostly white school, I could play my way out of my isolation.

In middle school, the soccer coach decided that another girl and I played well enough to join the boys’ team. It didn’t last: One afternoon before kickoff, the opponent’s coach, stunned by the presence of two girls, argued that we couldn’t play. “My boys will be distracted,” he said to our coach’s disbelief. To prevent our team from having to forfeit the game, the two of us stepped aside. After that day, I left the team altogether, but I never stopped playing.

By 14, my soccer career was taking off. I joined the provincial team for Ontario, a pipeline for the Canadian national team, and was scouted to play internationally for Trinidad and Tobago months before it hosted a youth World Cup. Playing on that team took me back to my father’s birthplace near the capital, Port of Spain, where I visited once as a child and barely remembered as a teenager, and to new pockets of the world, where it seemed there was always a pickup game to find. I played with strangers as a way of orienting myself, of feeling like less of an outsider everywhere I went.

I played with strangers as a way of orienting myself, of feeling like less of an outsider everywhere I went.

Playing those games felt like pulling a loose string, unraveling me until all I had left were the essentials. I was freed from the pressure to perform, freed from the fear of failure. With that freedom came a sort of clarity; the barrier between the person others saw and the one I imagined myself to be gradually softened, then melted away entirely. Years after knee surgery brought my soccer career to an end, I moved to London and wandered to Regent’s Park, interrupting a sweaty sea of (usually male) bodies to ask, with total confidence, “Can I join?”

From Copacabana Beach in Rio de Janeiro to a concrete slab at Macqueripe Beach in Trinidad to the cobbled road near a hotel in Venezuela or a park in London, there has always been something comforting about playing with complete strangers, people with whom I can be instantly rivalrous or harmonious, people to whom I have no obligation beyond the game. In a matter of moments, my body reveals itself. With a quick scissoring of feet, a furtive twirl on the ball or a sudden burst in another direction, I can be daring and unrelenting in a way I seldom am. I mirror and deflect, I taunt and praise, outmaneuver, yield and jostle. My initial reticence is soon replaced with the slapping of skin and barking of orders. One fleeting glance directs someone, and a slight lean of my body thwarts another. I feel a flush of satisfaction when my body reflexively twists and flinches, as if guided by someone other than myself. I do things in ways the men on the field never quite believe that I, a woman, can.

The Belgian novelist Jean-Philippe Toussaint once wrote, “Football, like painting, according to Leonardo da Vinci, is a cosa mentale; it is in the imagination that it is measured and appreciated.” We are conditioned to believe that even soccer is within the limits of our control. We erect goal posts, draw boundaries, enlist stern referees and craft pristine surfaces of play with measured breaks. Even today, the whole culture of the sport can be demeaning and exclusionary to women; many of my former teammates who now play professionally are paid less than men and aren’t afforded the same sponsorships, facilities or airtime. But those improvised games I’ve played with strangers transcend all of that. With them, I can imagine myself as capable of anything.

On a recent day, I biked past the same patch of grass in Hyde Park where I played nearly a year ago. I think of the boys and how we all kept coming back, day after day. How despite speaking different languages, we shared a physical one. I think of this collection of strangers, here and elsewhere — of the innumerable, ever-changing faces, of all those people I met at the park, the street or the beach, who never deny me the opportunity to show what I can do.

Geneva Abdul reports for The New York Times in London.