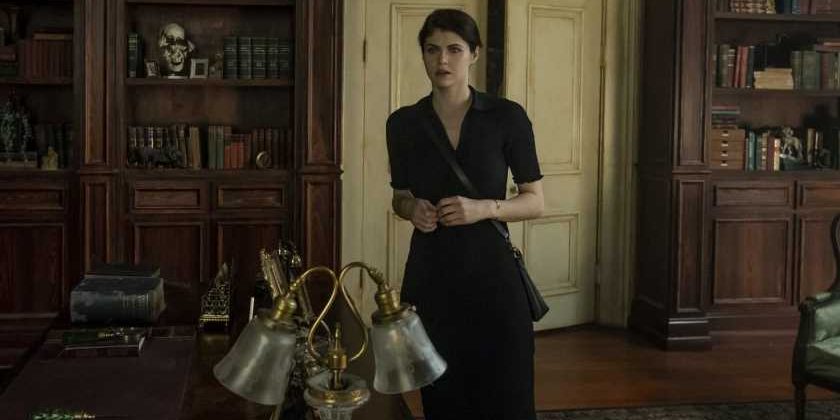 With AMC+’s Mayfair Witches finally getting a trailer and release date, it looks like we’ve got a lot of magical mayhem coming our way. If you can’t wait for the latest supernatural show, check out our list of other witchy stories to hold you over until then.

Witches have always captured the imagination of spook-seeking viewers. With spellcasting abilities and trendy black lace-clad covens, what’s not to love? The latest in a string of magical adaptations, AMC+’s Anne Rice’s Mayfair Witches is the next supernatural offering to keep on your radar.

Adapted from the Lives Of The Mayfair Witches novel trilogy penned by gothic literary master Anne Rice, the show is AMC+’s newest mystical instalment. Mayfair Witches follows neurosurgeon Rowan Fielding, played by The White Lotus alum Alexandra Daddario,who returns to her home of New Orleans following her mother’s death, where she finds out that her lineage is more broomsticks than scalpels. Also starring the likes of Jack Huston, Tongayi Chirisa and Harry Hamlin, the show promises scares, sorcery and devilish women galore.

In the trailer, we get our first real look at the infamous Mayfair house, which we are told has a haunting history behind its beautifully decrepit Airbnb rusticity. Rowan quickly finds out about the witchy associations with the house and we watch as she starts to develop strange abilities and grapple with something that’s changing in her. Ghostly visions, hooded figures, chanting girls and mysterious keys shown throughout the trailer give us a hint as to the deepening mystery of the Mayfair house that Rowan must uncover to understand her own history and powers.

For fans of the supernatural and bewitching tales, Mayfair Witches won’t be one to miss when it lands on AMC+ on 5 January 2023. But with the show not due for release until next year, we may have to satisfy our conjuring cravings elsewhere. To keep up to date with all the covens until then, why not check out some other witchy watches we’ve found below?

Not quite the one that started it all, but certainly the one that put witches back on our radar, AHS: Coven set the bar for making witches cool again. Plus, it’s about as close to Mayfair Witches as you can get. Stunningly spooky house in New Orleans? Check. A coven of young witches coming to grips with their powers? Double check. A wardrobe that would be the envy of gothic runway models everywhere? Of course.

American Horror Story: Coven is available to watch on Disney+.

American Horror Story: NYC – the new teaser trailer promises an upcoming season “like no other”

Another throwback instalment in our list, Hocus Pocus 2 is the brand spanking new sequel to the beloved Disney film that frequented all our Halloween night marathons. With the main trio of the Sanderson sisters returning to cause havoc, this is sure to be a fun watch for older and younger audiences alike. For optimum viewing, why not make it a double feature and start with the original, too?

Hocus Pocus 2: the long-awaited Disney+ sequel is finally here and this is what viewers are saying about it

The Chilling Adventures Of Sabrina

The Kidz Bop version of AHS: Coven, this Riverdale spinoff puts a CW spin on young witches and tackles school bullies, boyfriends and the trials of trying to maintain a normal teenage life while trying to deal with the literal devil. Also an update on the now-retro Sabrina The Teenage Witch series, this show provides some nostalgia too, keeping up with the adventures of Sabrina Spellman and her aunts Hilda and Zelda.

Don’t be fooled by the fresh-faced cast, The Chilling Adventures Of Sabrina delivers jump-scares and gore too. Very chilling, indeed.

The Chilling Adventures Of Sabrina is available to stream on Netflix

The blueprint for ‘autumn girls’ everywhere, Practical Magic offers not only a dizzyingly cosy aesthetic but also a story of sisterly love under the pressure of magical abilities. The film follows the story of two sisters, played by Nicole Kidman and Sandra Bullock, as they struggle to maintain their magical secret in their small town and attempt to outdo a curse that means they will never be able to find love.

There’s so much to admire in this film. The envy-inducing seaside house. The eccentric aunts played by the ever-iconic Stockard Channing and Dianne Wiest. Nicole Kidman’s bangs. Practical Magic is one for the girls.

When it comes to 1996’s The Craft, high-school revenge is the name of the game. It follows a group of outcasts at a Catholic high school in Los Angeles, who practice witchcraft to conjure hexes and spells against others who wrong them. Basically, it’s the usual petty high-school drama, but with a twist of the occult. But when you can do anything that your teenage heart desires, what’s the price that demands to be paid?

The Craft was released to mostly underwhelming reviews but quickly grew to become a cult classic for future witch-lovers everywhere due to its combination of genuine darkness and female empowerment. And if you can’t get enough, there’s even a 2020 reboot that you can follow up with.

The Craft is available to stream on Amazon Prime

The witch lover’s answer to Buffy The Vampire Slayer, Charmed is the late 90s show of your dreams. Charmed follows three sisters as they work together to learn more about their powers and battle against the forces of evil. Running for eight years, this show was a television staple that caught the attention of many a teenage girl as a result of its exploration of relatable family troubles, the female-led cast and quintessential millennium fashion.

With a cast that boasted the likes of Alyssa Milano, Holly Marie Combs, Shannen Doherty and Rose McGowan, Charmed captured a moment in time when fictional witches spent as much time worrying about the little everyday things as they did about defending the earth from otherworldly magical villains.

Charmed is available to watch on Amazon Prime