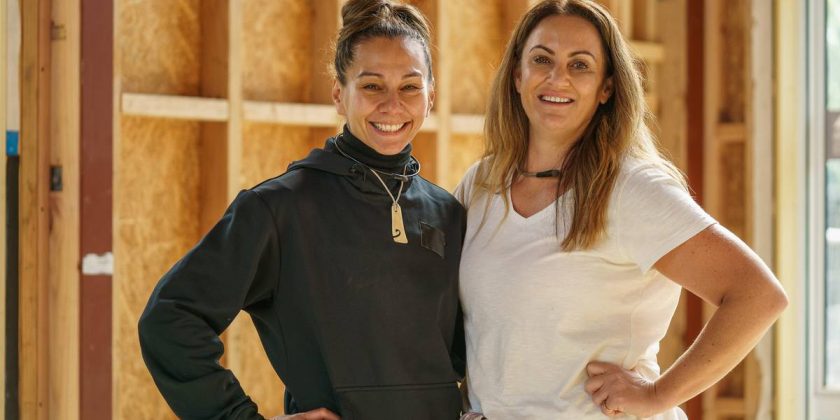 There’s not much that can faze former army corporal-turned-real estate agent Rachel Martin after being deployed everywhere from Egypt, East Timor and Bougainville to remote corners of Aotearoa.

So when her Team Purple partner and bestie Janah Kingi decided to quit The Block NZ after Covid-19 hit, the Papamoa-based mum-of-three wasted no time finding a suitable replacement – and who better than her fellow former army buddy Connie King?

“She’s a good friend and an electrician, and I knew she’d be amazing. I rang her and she said yes straightaway!”

It was a no-brainer for 40-year-old Connie. The sparkie and mum-of-six explains, “I’d been having a really bad week. Everything just felt like it was getting on top of me and I had that classic mum battle of not feeling like I had any time for myself. So when Rach asked, there was no hesitation!”

The pair met on a course while in the army and “instantly hit it off”, says Rach. “We were both mums, both fitness junkies, both a little bit older – and both Geminis! We had fun, despite being stuck on an admin course in Waiouru. We’d go to the gym and then the bar!”

And while it was her former teammate Janah’s idea to enter The Block, fun-loving Rach admits that it was always her daughter’s dream to see her on Three’s hit DIY show.

“When Jayde was a kid, she always used to say, ‘You should go on The Block, Mum!’ But at the time, the kids were all quite young. Now they’re teens, there was no excuse to say no when Janah suggested it!”

Rach’s DIY passion has been something she and her hubby have always done as a team – ever since they first met in the army, where Graeme was a corporal in maintenance engineering. Over the past 21 years, they’ve been buying and renovating houses as they worked their way up the army ranks and expanded their family.

“We just had a friendship at first, but he’s always said he knew at first sight,” she tells.

“And after 21 years together, I think we’re meant to be! Everyone keeps asking why we never married, but to be honest, I’m just not a big wedding person.”

Conversely, Connie married her hubby Isaac when she was 27, with four sons from a previous relationship, and he was just 20!

Connie tells how she got together with Isaac by following advice from her ex, who told her to “marry the man who you turn your nose up at”. She laughs, “I guess I originally turned my nose up at the seven-year age gap! Then one day, he played me Always With Me, Always With You by Joe Satriani on electric guitar and I was like, ‘OK, maybe we should give this a go!'”

Shortly after marrying, the couple became the first husband and wife ever to simultaneously enlist in the New Zealand Army.

For Connie, who was raised in a broken family with an alcoholic father, the army was a chance to escape the grinding poverty of life on a rough estate in Maraenui, Napier, where she and Isaac struggled to feed and clothe their family. The final straw came when a murder occurred down the road from their home.

“I decided there had to be a better way for us to live and give our kids a better future,” she shares, adding that her literal lightbulb moment came when an electrician came to their house to sort out the light fittings. “I was like, ‘I could do that!'”

After a whirlwind army application process, they made day-care plans for the kids, with Connie’s late mum Lorraine looking after their six-month-old baby, and were duly accepted.

Connie smiles shyly as she tells how she and Isaac both thrived in their 13-year army careers, originally hiding their marital status from colleagues, but retaining a healthy sense of competition between themselves as they worked their way up the career ladder.

For Connie, that meant going from being an administrator to achieving her dream role as a sparkie – the first-ever female electrical engineer in the NZ Army!

“I want to inspire young women to follow their dreams and know that it is possible to escape their backgrounds,” she enthuses.

After the birth of the couple’s surprise sixth child, Connie and Isaac finally quit the army to spend more time with their kids, starting their own plumbing and gas-fitting business from their six-bedroom home in Palmerston North.

Looking at her new Block partner with pride, Rach tells how their new “strong, sharp and capable” dynamic is unfolding well on the reality series, with Connie’s tradie skills and ability to follow her pal’s vision a big asset.

“I want to be a trendsetter, a trailblazer,” tells Rach. “I am totally confident going back in with Connie because we’re following my vision and if I get it wrong, it’s all on me.”

She concludes, “People sometimes underestimate what females can do, but we’ve been in the army – we understand how to work as a team, and we know the meaning of mental and physical strength and resilience… So they better watch out!”

Janah reveals why she quit

The interior designer, 39, explains in her own words…

“The decision to not return to The Block was difficult and one that wasn’t made lightly.

There was no fight or disagreement between Rachel and I – it was because of my flourishing construction and interior-design business booming after Covid.

“Also, I was surprised at how much I missed my little ones last year – and that was only for two weeks!

“I will absolutely be watching The Block now that Connie has taken my place. I’m at peace with my decision. It just wasn’t my time this year, unfortunately – this time is for Connie and Rachel. But I have no regrets at all. My time on The Block was an absolute blast!

“Everyone was so fabulous and I’ve made some dear friends out of the experience, so that in itself is priceless – although Team Purple will forever hold a place in my heart. I’m really looking forward to following their journey, but also knowing all the other teams on a personal level, I’m really invested in their success too! I wish everyone on the show the absolute best luck!”