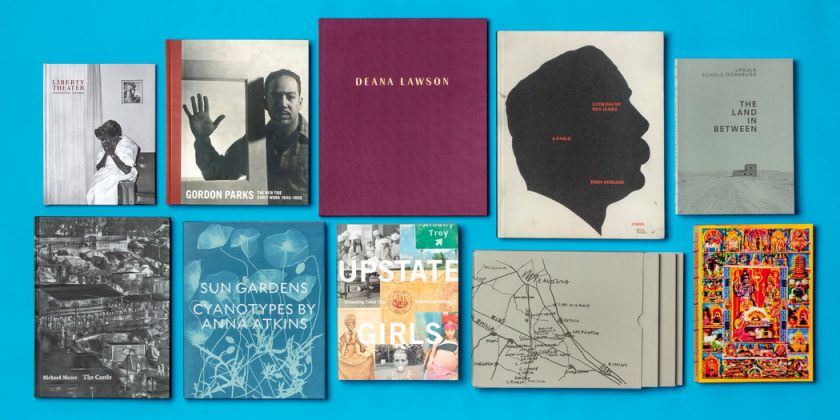 A photo book is a stubbornly old-fashioned technology. It allows for some experimentation, with scale, paper and color, but it is ultimately a sequence of photographs printed on paper and bound into a portable volume. In a time of a torrential flow of online photographs and omnipresent video, such material simplicity is almost quaint. But a form invented in the mid-19th century remains one of the most vivid ways of conveying the power of images.

I think about my “year-end” list of photo books all through the year, poring over publishers’ catalogs. I’m sent many books and buy many others. I sift through hundreds of volumes. Each book is finally chosen on its own merits. This is not a list of “relevant” or “important” books. I care only for photo books that work, photo books that have somehow merged form and content to create a third thing, full of its own life, vital and resonant. Here are 10 that hit that mark for me in 2018. 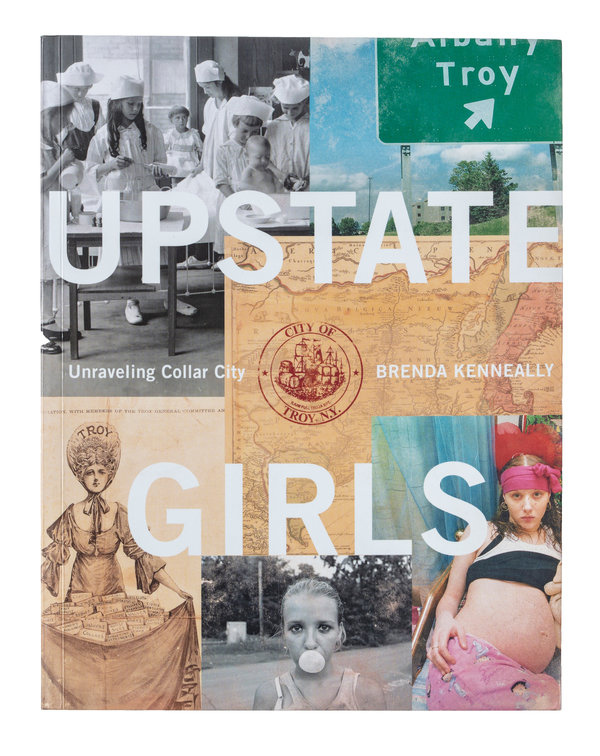 In “Upstate Girls,” her nine-year record of interlinked families in Troy, N.Y., Brenda Ann Kenneally is not so much a fly on the wall as a bee in a hive. Her intimacy with the young women at the center of the project is total. She’s there for their pregnancies, their breakups, their addictions, their intractable anomie. In depicting at great length and with meticulous attention the harried, messy lives of this set of ordinary Americans, Kenneally shows us tough realities of intergenerational trauma that are typically ignored or mischaracterized.

In the spring of 2008, John Gossage took a road trip in coastal England and Wales, visiting a number of out-of-the-way places, including Caerau, a Welsh mining town. The trip was partly a homage: Robert Frank went to Caerau in 1953 and made socially engaged photographs, including a celebrated one of a soot-covered miner named Ben James. The title of Gossage’s book notwithstanding, not only does he not depict Ben James; he does not even seem particularly interested in evoking him or the social crises Frank photographed more than half a century before. Gossage instead wants to insist that there’s always more happening in a photograph than its putative subject, that a photograph is always in the first place a record of an optical experience. He photographs fences, cars, signs, weeds and his travel companion, the photographer Martin Parr. “Looking Up Ben James,” with its black-and-white images gorgeously printed in large format, is an oblique delight from beginning to end.

Gordon Parks (1912–2006) is such a solid and worthy photographer of the American experience that you can miss just how canny, wise and intimate his work is. “The New Tide,” published to accompany a major (and currently ongoing) exhibition at the National Gallery of Art, does him justice. In great detail, we are taken through Parks’s first decade of independent work, and see how he evolved from portraiture and fashion to the social documentary for which he became widely celebrated. It’s a pleasure to see how, even in the early work, Parks’s eye is unerring. A 1942 picture, for instance, is accompanied by the following caption: “Washington, D.C. Young boy standing in the doorway of home on Seaton Road in the northwest section. His leg was cut off by a streetcar while he was playing in the street.” It’s a sad narrative, compressed and poignant, but what echoes in the mind is the photo itself, the way the one-legged boy’s body seems to rhyme with that of a girl sitting on a stoop across the street. The catalog is as accomplished for the photographs it reprints as it is for its many fine essays on Parks, including those by Maurice Berger, Sarah Lewis, Deborah Willis and Philip Brookman, which contextualize Parks with the writers who mattered to him, Langston Hughes and Richard Wright among them.

Inspired by the dazzling new possibilities of photography, the botany enthusiast Anna Atkins (1799-1871) set out to record as many British algae as she could lay her hands on, using Sir John Herschel’s recently discovered cyanotype technique. (Cyanotype, also known as blueprint, is a kind of contact printing made with iron salts.) The resulting publication, “Photographs of British Algae: Cyanotype Impressions,” issued in a limited edition with handwritten text in 1843, is considered to be the first photo book.

“Sun Gardens” is a reissue and expanded edition of a 1985 publication on Atkins by Larry J. Schaaf and Hans P. Kraus, now with additional contributions by Joshua Chuang, Emily Walz and Mike Ware. It is a strong work of photography scholarship that sets Atkins’s work in its historical context and presents her delicate photograms with unshowy fidelity in a handsome volume.

Beauty indicts. If beauty exists, then why isn’t everything beautiful? If something is truly beautiful, how could its beauty have been missed? There is something particularly interrogative about the kind of beauty apparent throughout Deana Lawson’s monographic first book. Her portraits are lush, intense and grand. But their grandeur is of an unusual kind: These are portraits of black people, in cluttered domestic interiors or Edenic outdoor settings, clothed or nude, carrying on the business of being alive and fabulous. Lawson’s feeling for how pattern, emotion and implied history intersect is as expert as a master painter’s. Her subjects, mostly strangers she persuaded to pose for her, in locations from the United States to Jamaica to Ethiopia, are here made immortal. The accompanying essay, by Zadie Smith, is a big plus.

Guido Guidi (b. 1941), one of the leading lights of modern Italian photography, has since the 1970s recorded his country’s postindustrial landscape.

“Per Strada” (“on the roads”) presents, in three volumes, his 14- year (1980–1994) investigation of public space and infrastructure on and around the Via Emilia, the ancient road that connects Milan to the Adriatic Sea. Guidi’s eye is rigorous and subtle, and “Per Strada” is an education in seeing and composition. It is in conversation not only with the work of such notable contemporaries as Luigi Ghirri, Stephen Shore and John Gossage, but also with the great mathematically minded innovators of early Italian Renaissance painting: Fra Angelico, Paolo Ucello and Piero della Francesca.

Places that are frequently photographed become nearly impossible to photograph interestingly. Do we really need another book “about” India? If the book in question is as vivid and genuinely generous as Nick Sethi’s “Khichdi (Kitchari),” then the answer is yes. Over a period of 10 years, Sethi traveled in India, developing along the way a distinct approach to the country’s bewildering diversity. Sure, India is rowdy and colorful, but Sethi’s work couldn’t be further from the banalities those features usually inspire. The book is printed on high-gloss paper, in bright and occasionally lurid colors, and it is a cascade of images of contemporary street life, full of cheap goods, high-tech devices, the faces of humans, murals, religious artifacts, the tools of work and visual evidence of a wide spectrum of gender performance.

“Khichdi (Kitchari)” is named for the lentil-based soup eaten in all parts of the country. Sethi’s book, like that soup, is made of many parts and holds together very well.

In photo after photo, Rosalind Fox Solomon (b. 1930) captures a reality that few even observe. How does she do it? Her practice has taken her to many countries, but “Liberty Theater,” her latest book, focuses her roving, unsentimental eye firmly on the United States. The photos, like Diane Arbus’s, are discomfiting. But while Arbus sought out odd people or situations, Fox Solomon’s oddities are elsewhere: in her special ability to register tiny interstitial moments. Her crisp, precise photos — some of them are portraits, others seem to be caught on the fly — pin her subjects in situations of inadvertency, when their faces and bodies are between one attitude and another. This tonal ambiguity sets fire to the putatively binary content before us: black or white, young or old, rich or poor, sick or healthy. She somehow catches everyone in between. Here is the flawed nation, one strange facial expression at a time, without a trace of smugness or parody.

Ursula Schulz-Dornburg, ‘The Land in Between’

“The Land in Between” is the catalog of Ursula Schulz-Dornburg’s retrospective exhibition of the same name presented at the Städel Museum in Frankfurt in the summer of 2018, and it conveys very well what made that exhibition among the best I saw this year.

Schulz-Dornburg, born in Berlin 80 years ago, has over the decades created a varied body of work is motivated by a consistent imaginative quest: how to photograph landscapes in political transition. There are all kinds of obvious ways of going about this, but Schulz-Dornburg has largely deployed her efforts in idiosyncratic locales, mostly in the Middle East and in the former Soviet countries. She has photographed in Syria, Georgia, Azerbaijan and Russia. She has photographed borders and deserts. One memorable series was about Armenian bus stops, photographed directly so that they begin to resemble modernist sculpture. Another was on the marsh Arabs in Iraq in the 1980s; the fragile, intricate structures she photographed would soon be permanently lost to political upheavals and war. But like that of all serious artists, her work was more than how it can be described: a keen political intelligence combined with a poet’s feeling for light, stone, form and shimmering horizons.

“The Castle,” named for Kafka’s 1926 novel of bureaucratic nightmare, is a series of images about a 21st-century horror: the limbo faced by refugees who have traveled from the Middle East and Central Asia toward Europe. Over several years, the Irish photographer Richard Mosse visited refugee camps in Lebanon, Turkey, Greece, Germany and elsewhere and witnessed firsthand the squalor and despair of the migrants temporarily housed in them. Using a military grade thermal video camera and stitching together hundreds of stills through a meticulous process, Mosse has created a contemporary sublime. The cameras sense infrared radiation, recording localized areas of heat in white, contrasting them with the cooler background. The effect is striking, like observing the world in negative. The technique allows Mosse to photograph the victims of our society’s policies without making them identifiable and potentially exposing them to reprisals.

We see tents, shacks, trees, putrid pools, cubicles, hillocks and the telltale bright shapes indicating human bodies; abject life, life as it ought not be. “The Castle” is white hot with the accumulated dismay of this confounding moment, a masterwork that ought to grieve and shame us collectively.

Teju Cole is a novelist, a photographer and the magazine’s photography critic. He teaches at Harvard.