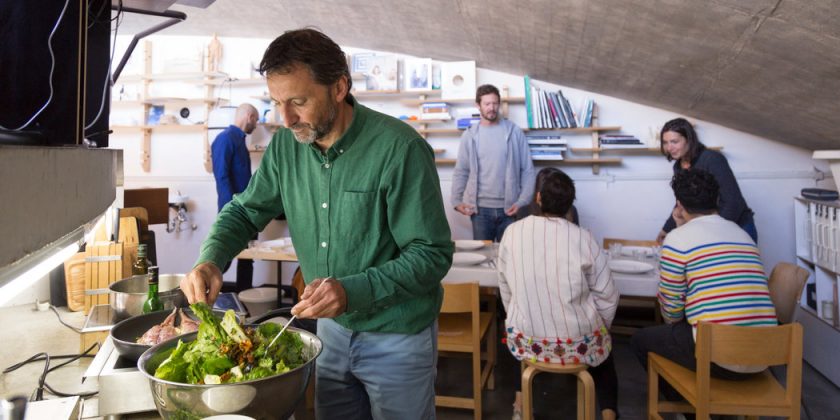 For the mixed-media artist Xavier Veilhan, the studio is not only a place of work, it is also a place for living. While he notes that many of his peers in the visual-art world have rejected the convention of the studio to “work on airplanes and outsource their production,” he has adopted the opposite approach: “I do not have a fancy home or a beach house, I have this studio instead.” In 2007, he collaborated with the French architecture firm Bona-Lemercier to transform a ’60s-era storage hangar in Paris’s Bastille neighborhood into a space where he could produce and fabricate his work, which ranges from 3-D printed sculptures to ambitious installations like the recording studio he created in the French Pavilion at last year’s Venice Architecture Biennale. But he also wanted a place where he could cook intimate lunches and host the occasional party (every year, during Paris’s annual Fête de la Musique, he invites up to 500 of his friends into the studio to watch world-renowned D.J.s). The studio’s design, while delightfully unconventional — with its rounded blond-wood walls, nylon strap and net railings and floating portal-like doors — is precisely tailored to Veilhan’s needs. 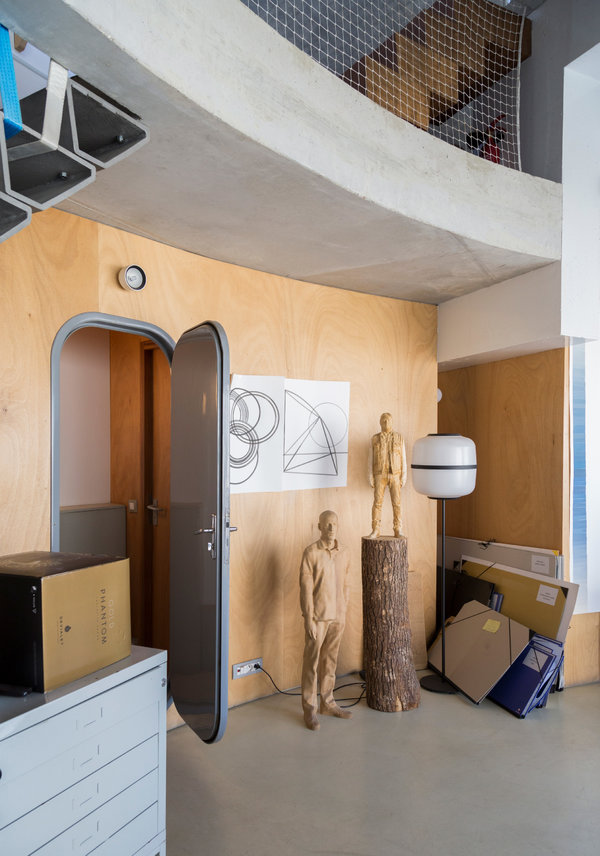 The custom kitchen is where his obsessions with design, art making and food converge. Boatlike in shape, with a curved cast-concrete ceiling and a striking economy of space, this is the heart of the building and as close as Veilhan comes to claiming an office of his own in the open-plan space. The walls are stacked with intriguing objects, including obscure nautical instruments and editioned artworks. Veilhan drinks from an unassuming institutional water fountain that is actually a sculpture by the American artist Marc Ganzglass, titled “Meteorite Inclusions (Fountain)”; the pipes are formed from fragments of an iron meteorite. 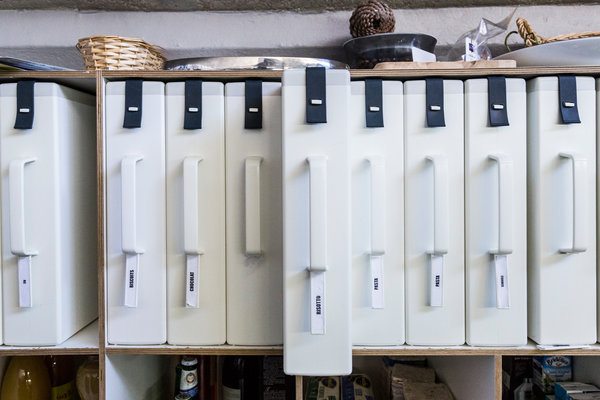 On a recent workday, just back from his daily visit to the Bastille farmers’ market, Veilhan arranges a bounty of earthy, orange chanterelles, jammy figs and a silver-skinned bonito on the cast-concrete countertop. Today, like most days, he will prepare lunch for his dozen or so employees, an improvisation inspired by Paris’s best produce. He grabs a box of rice from a bank of labeled storage boxes — pasta, chocolate, biscuits — by the French designers Ronan and Erwan Bouroullec. (The very same boxes are filled with paperwork and press clippings in the main work space.) As he cooks, Veilhan banters with a team working on a bank of computers perched on the platform overhead. Then, when the fish is poached, the salad dressed, he rings an antique copper bell, summoning the staff to the table. The team gathers, passing their plates to Veilhan for generous helpings. Lunches like these are a mainstay; they allow the crew time to catch up, exchange ideas and report back from shows they’ve seen — they’re also a much-needed break during the workday. “We don’t know what to do when Xavier is traveling,” says Jessica, the studio’s manager, “lunch time is complete chaos.”

1. Brush chanterelles with mushroom or pastry brush to remove debris (do not wash with water). Remove woody stems and tear larger mushrooms in half.

2. Dry sauté chanterelles in a pan on medium heat for five minutes. Add kosher salt and 1 tablespoon of olive oil, stir to coat.

3. Remove pan from heat. Add sliced figs to pan, to warm slightly, then set aside.

5. Top with chanterelles and figs. Garnish with parsley and chives and serve.